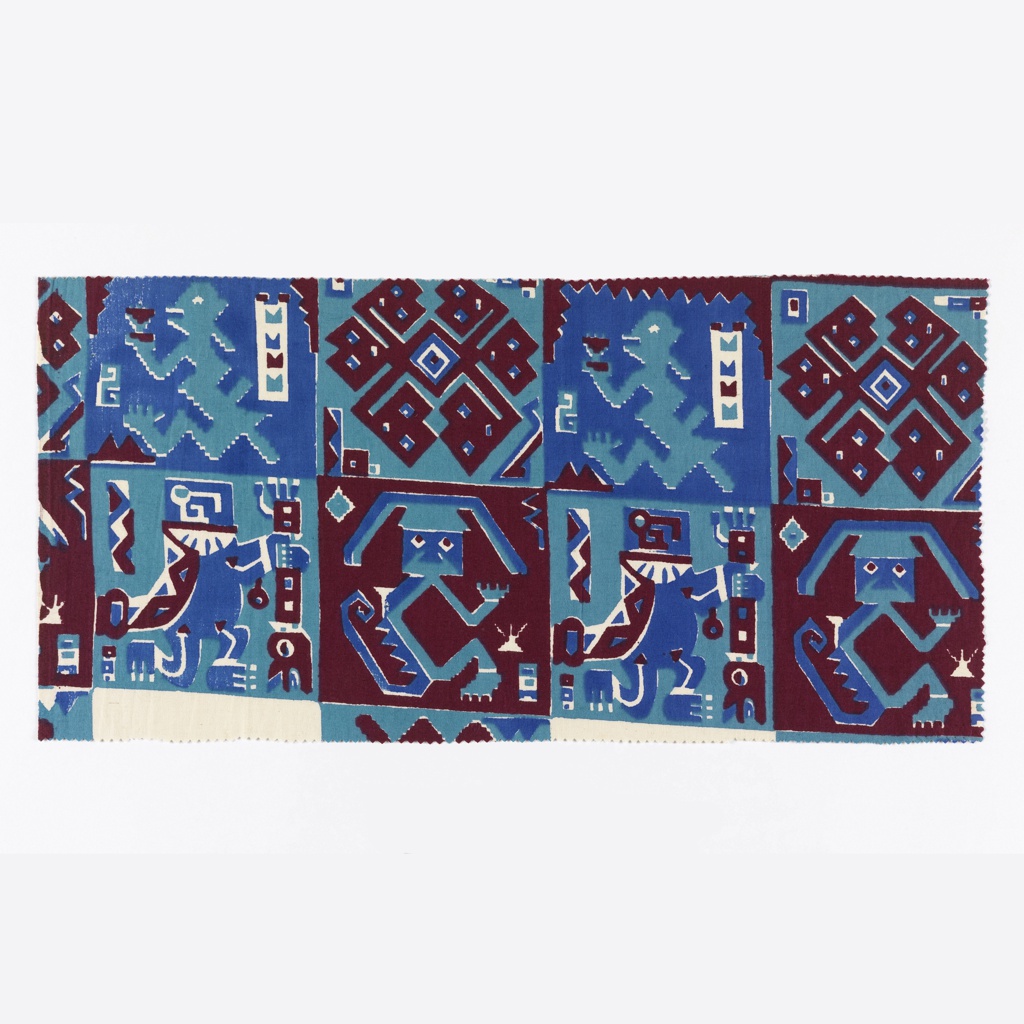 On November 21, 1939, Women’s Wear Daily reported on the upcoming launch of a new line of fabrics from the Bol-Inca Group. Under the art direction of Will Chappel, this group of eight fabrics took direct inspiration from a collection of original pre-Columbian fabrics purchased in Bolivia by fashion and accessories designer Alma Norton Duffill of California. Chappel stated that the line of fabrics would be produced by different manufacturers in “wool, cotton, silk, linen, and rayon for playclothes, sportswear, resort formals, swimsuits, accessories, beachwear, headgear, footwear, and other items.” [1]

At Cooper Hewitt, eight small cotton swatches from the Bol-Inca line show a variety of pre-Columbian Andean motifs including the Moche-Wari staff-bearing figure, stylized feline figures, animals outlined with serrated edges, and several geometric motifs. These eight swatches were screen printed on cotton by California Hand Prints of Hermosa Beach, California. Mary Hampton in her column for the Santa Cruz Sentinel referenced the manufacturer’s names for the colorways, listing them as “Llama beige–Andes white–Condor grey and Conqueror blue.” [2]

While California Hand Prints had produced textiles with stereotypical Mexican motifs in the past for sports prints, the Bol-Inca Group under Chappel’s leadership emphasized in the fashion press and its advertisements that the designs and colors were the result of direct copying from ancient sources. Alma Norton Duffill was not directly credited in the press as the designer of the textiles, and only the Los Angeles Times on January 14, 1940 acknowledged Duffill’s contribution to the “Inca prints in startling new golden-greens, browns, orange and red shades which have never before been seen.” [3] On February 28, 1940, Women’s Wear Daily used fashion illustrations to report on the new west coast fashions shown in New York including a swimsuit and shoes made from a Bol-Inca fabric by West Coast Manchester Mills and Cole of California. [4] In California, the Bol-Inca fabrics were used by a group of six women fashion designers who created women’s clothing under the name Affiliated Fashionists; these were carried by department stores on both coasts.

The Latin American influence on fashion and textile design in the United States during the years of WWII was no coincidence. Once the war forced the French fashion houses to cease operations, American designers started to look to their own hemisphere for inspiration. Much of the editorial language around this effort was stereotypical, bigoted or just downright confused as one journalist for Women’s Wear Daily reported that the “Bol-Inca cotton prints that feature ancient Aztec motifs from Bolivia” would receive “big play” especially for beachwear. [5]

Support and encouragement for better relations with our Central and South America neighbors was formally promoted by Franklin Roosevelt’s 1933 foreign policy program known as the Good Neighbor policy, which stressed non-intervention in the domestic affairs of Latin America. This new spirit of goodwill became even more important during WWII and extended to the world of art, culture, fashion and interior design. In 1942, Cooper Union Museum opened an exhibition entitled Hispano-American Fabrics, which featured the Bol-Inca line and other Latin American-inspired fabrics by Mimi Blaker for Galey & Lord and Cheney Brothers. Samples of these fabrics were retained for the Museum’s collection.

Kimberly Randall is the Collections Manager for the Textiles Department at Cooper Hewitt, Smithsonian Design Museum.

One thought on “Bol-Inca by California Hand Prints”

Hey! I just wanted to say thank you for posting this. I recently came across a hooded jacket and dress set of this type and I was having a hard time identifying before I found this.
Kind Regards,
Ella