Ting-A-Ling, the Perfume Bottle that Sings 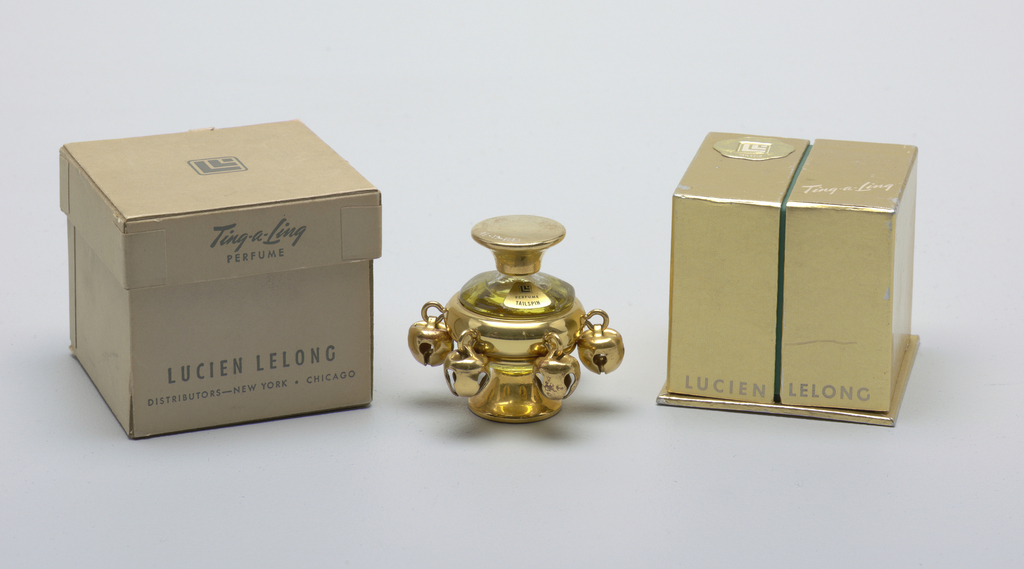 This festive little perfume bottle embodies the creative genius of French couturier Lucien Lelong, active between 1919, when he opened his first couture house, and 1948, the year he retired. Lelong was influential in shaping the world of haute couture throughout much of the twentieth century. Among his contemporaries were Chanel, Worth, Patou, Lanvin and Schiaparelli, each of whom has left an indelible mark on fashion. To Lelong’s credit he was also responsible for training many of the most noted mid-century fashion names, including Pierre Balmain, Christian Dior, and Hubert de Givenchy.

In 1924, Lelong began experimenting with fragrance. Like Paul Poiret and Coco Chanel, he considered fragrance to be an integral part of a woman’s style. Initially he used simple packaging for his perfumes. As orders arrived from far afield, Lelong came to recognize the importance of decorative packaging and elaborate bottles and flacons. Thus the Société des Parfums Lucien Lelong was born and would continue to thrive well after Lelong closed the doors of his fashion house.

The earliest perfumes were named A, B, C, J, and N, a sense of simplicity that created an aura of mystery and romance, much like Chanel’s numbered perfumes. Later, the intricately crafted bottles for Lelong’s scents, largely designed by the perfumer himself, were inspired by fabrics, garlands, feathers and modern architecture. In all, Lelong created 27 different fragrances.

This bottle, dating to about 1950, is not just a container for fragrance, but a multi-sensory object of fashionable décor. The vessel, with its squat bulbous body and tinkling bells, was made not just as an object of visual pleasure, but to be touched and handled. The six jingle bells, evenly spaced around the middle of the bottle add an aural sensation to the visual and olfactory perceptions. The gold-toned finish imparts a feeling of luxury, while the music of the bells adds delight. The fragrance itself speaks individually to each wearer, as it responds differently to each wearer’s body chemistry.

Complex perfumes, unlike single note perfumes, are elusive and hard to describe. More than an olfactory sensation, pinning down the descriptors of a fragrance is a task for the most discerning of noses, raising countless questions. Does it suggest an earthy quality like green grass and moss? Is it sweet or fresh like white lilies or snow? Is it spicy or musky? Each element has its own unique characteristic, adding to the whole of the fragrance, which started as an idea in the mind of the designer.

Lucien Lelong was a brilliant couturier and businessman with myriad achievements to his name. The fact that his perfumes remained in production for decades after his death in 1958 is testament to his understanding of the role our senses play in fashion.