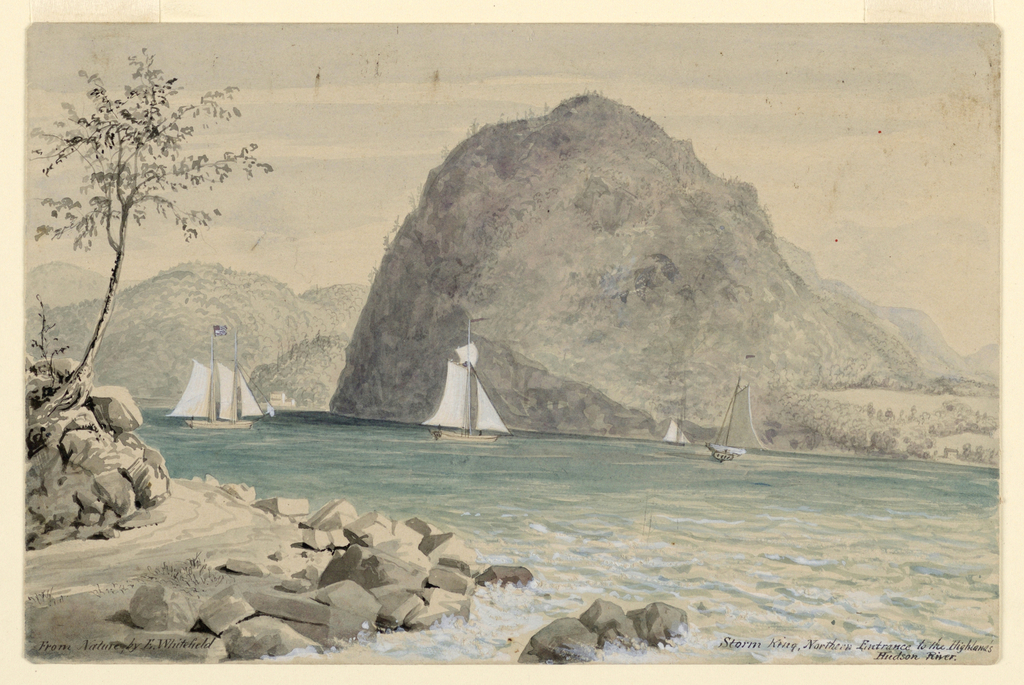 This drawing is signed “From Nature, by E. Whitefield” and depicts a view of Storm King Mountain from across the Hudson River on the base of Breakneck Ridge. Today it is possible to visit the same viewpoint where Edwin Whitefield sketched the composition and admired the beauty of the landscape.

Edwin Whitefield was born in 1816 in Dorset, England and immigrated to the United States in 1837. By 1842 he was painting views of the Hudson River Valley and exhibited his work at the National Academy of Design. [1] Struggling to gain recognition as a painter, Whitefield applied his skills as an artist to draw views of cities that could be transformed into printed advertising cards, letterheads, and panoramic views. Embracing lithography for the reproduction of his watercolors, he published nearly thirty views of American cities between 1842 and 1853.

Throughout the 1840s, the Hudson River Valley became urbanized with industrial expansion and new technology, particularly the development of the Hudson River Railroad. Sketchbooks and drawings, such as Storm King, Northern Entrance to the Highlands, Hudson River, make it possible to recreate an abandoned project once imagined by Whitefield to document buildings along the Hudson River. It is clear that Whitefield approached documenting the development of the Hudson River Valley with a passion and vision for historic preservation. Without any signs of industrial development, the plein-air sketch underscores a mission of conservation by capturing the scene in the manner of a large-scale landscape painting. The scale of Storm King Mountain is pronounced by the contrasting perspective of a tree in the foreground. The beauty of this drawing is revealed through the details; each sailboat is shown at slightly different angles to the wind while maintaining the correct scale; waves are depicted over the rocky trail in the foreground to evoke a nostalgic sense of a journey. The colonial era house on the far west bank further delineates a view more in keeping with the eighteenth century, not the nineteenth century. As part of the Cooper Hewitt, Smithsonian Design Museum’s collection, Storm King, Northern Entrance to the Highlands, Hudson River remains a valuable record of life along the Hudson River.

← Summer on the Horizon
Ting-A-Ling, the Perfume Bottle that Sings →