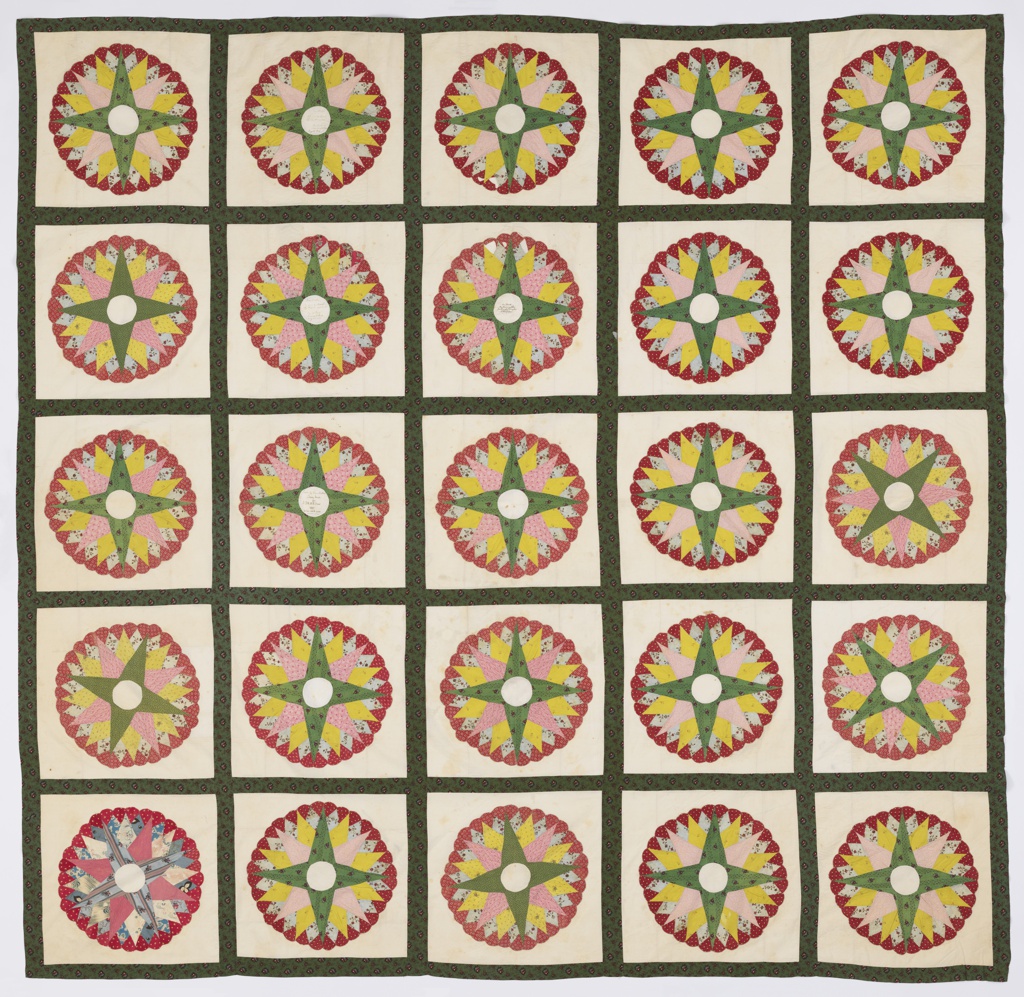 Posted by Jeffery McCullough on June 4, 2018

A very special family quilt in the Mariner’s Compass pattern was given to Cooper Hewitt, Smithsonian Design Museum by Susan Weitzman in 1972. Thanks to thoughtful, easy to read, handwritten inscriptions found on three of the twenty-five squares that make up the quilt, we know that Lacy Jones made the quilt in 1845, and that she was born in 1781. Research points to the family being from somewhere in Pennsylvania, and the style of the quilt and the fabrics chosen for it are indicative of Pennsylvania quilts, of both the Pennsylvania German and Quaker variety. The Mariner’s Compass pattern was most popular in the Northeast, specifically from Pennsylvania to Maine. In writing about an 1847 Pennsylvania quilt in the collection of the Metropolitan Museum, Amelia Peck points out that “the Mariner’s Compass quilt pattern is among the most popular sewn by Pennsylvania German women. It demands a great deal of care in both cutting and stitching the many small pieces that make up each compass.” [1] For patchwork, either new fabric or scraps are pieced together to form designs. Lacy Jones was very creative in her design for this quilt, creating magnificent compasses for each square that are so brilliantly colorful that there is a three-dimensional quality to her composition. The darker sashing — the strips of fabric that make up the borders around each square and all around the outside edges of the quilt — further focus the eye on the red, pink, green, yellow, and blue compass circles. A veritable rainbow of color exists in Jones’s design. This, too, supports the Pennsylvania connection, as Pennsylvania quilts are often more boldly colored than those from other East Coast regions.

The Mariner’s Compass pattern “was one of the earliest named American patterns and was popular with quiltmakers up and down the Eastern seaboard, especially in the 1840s and ’50s.” [2] Colonial Williamsburg’s curators assert that the earliest surviving quilt with the Mariner’s Compass pattern dates to 1834, but there are written records of the pattern name being used in 1798. [3] The pattern is a circle with radiating points that is reminiscent of “compass roses and wind roses, both similar in configuration, found on maps, sea charts, and magnetic compasses.” [4]

Cooper Hewitt’s quilt is special because it illustrates not just excellent quilting by the matriarch of a family, but the love that her children felt for her. The fact that the family chose a quilt to record their affection signifies that their mother’s quilting was an important part of the family and that during the mid-nineteenth century, quilts were a canvas for family memories. Written in the center of three squares, we have these words that resonate 172 years later: “Made by Our Mother / Lacy Jones / for / J. T. & M. P. Jones / 1845 / In her 64th year”’; “Our Mother /The First to cherish, /The last to desert us. / Wm D Jones / Frances L Jones / May 1st 1845”; “Our Parents / May the evening of their / lives be as the morning Sun. / J. P. & M. E. Jones.” With these familial clues set down, the search for the Jones family will continue. And if we ever find more clues or additional quilts made by Lacy Jones, we hope to find out why one square of the 25 is completely different from the rest. It’s not for lack of fabric or poor planning by Jones; it must be intentional and shows even more design creativity by an exceptional quilter.