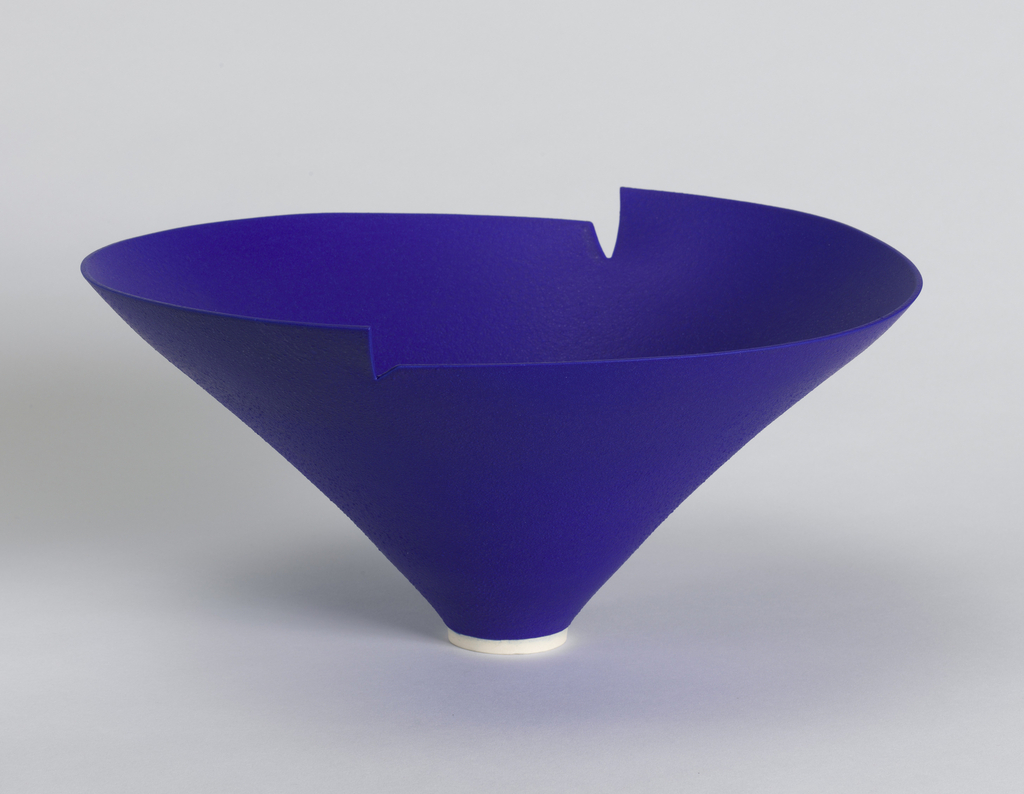 Elsa Rady, an American ceramicist, created works in porcelain that bridge craft and fine art, recalling Walter Gropius’ Bauhaus philosophy that the craftsperson and artist are one-in-the-same. In fact, to emphasize their role as aesthetic rather than purely functional objects, Rady requested that her ceramics be placed on shelves rather than as table centerpieces. This bowl, as well as another bowl in the Cooper Hewitt’s collection, are characteristic of much of Rady’s oeuvre; her works are recognizable for their svelte forms that often feature what she called “wings”—that is, a notched rim.[1] This avian element that can be seen on this bowl, paired with its thin walls radiating outward, create a graceful sense of upward swirling. This dynamism is enhanced by the bowl’s bold blue glaze.

The title of the bowl—“YKB pebbled”—refers to the French artist Yves Klein who became well-known for his monochromatic paintings in this shade of blue. So ubiquitous was his use of this blue in the late 1950s that it was named after him. Rady, who created other porcelain works in Yves Klein Blue, seems to have had a particular affinity for the color. In a 1984 letter addressed to the Cooper Hewitt curator, in which she discussed this bowl, she wrote, “It is bold and the color is like a magnet with a punch behind it. It will pull the eye from the far end of the room. It has a feeling as if a light is under the glaze.”[2] In another letter she mentioned the color again, saying, “The blue piece has that total seduction and glorious color.”[3]

Though her work has been compared to the art deco style, Chinese pottery from the Song and Ming dynasties, and the Bauhaus, it still holds its own in the history of American pottery. Rady classified her work, saying, “It’s Minimal. It’s Modern. It’s in every sense of the word mine.”[4]

← A Colorful Identity
A Fabric with a Touch of Tomorrow →