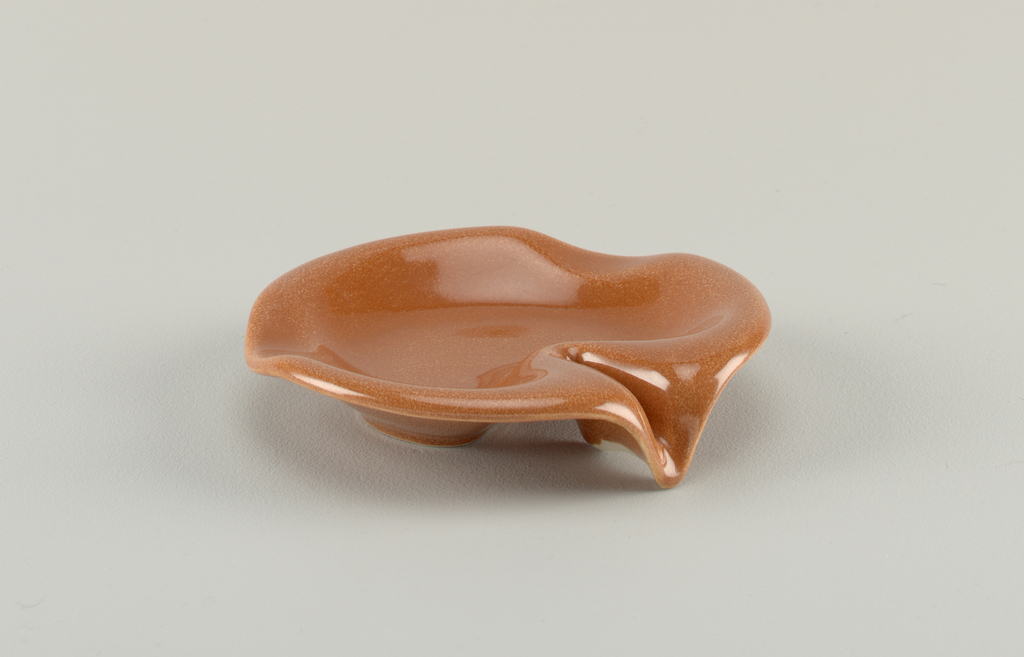 In celebration of our new exhibition, The Senses: Design Beyond Vision, this Object of the Day post explores the multisensory experience of an object in Cooper Hewitt’s permanent collection.

Traditionally formed by hand, ceramic vessels possess inherent organic characteristics. Their forms have often been influenced by or imitated the shapes of human bodies since the prehistoric age. However, the typically regular, geometric forms of mass-manufactured industrially produced ceramics challenge the purely organic nature of this medium. Preserving the natural qualities of ceramics in spite of the dominance of machine-produced pottery has been a challenge for designers since the introduction of machinery to the production process in the eighteenth century.[1]

Russel Wright addressed this design dilemma through his biomorphic earthenware. This ashtray, part of a 1949 series manufactured by Sterling China for hotels and restaurants, embodies Wright’s idea of designing machine-made ceramics that simulate their handcrafted counterparts.[2] Flaring up and out from its low base, the ashtray has a curved, asymmetrical rim that appears as though it was pinched and folded by hand. Although entirely molded by machine, the ashtray’s profile suggests the involvement of human contact throughout its production. The organic form also makes the ashtray user-friendly and invites human contact and interactions: the undulating rim is excellent for resting cigarettes, and the groove holds a matchbook perfectly. The groove also allowed restaurant workers to stack multiple ashtrays, the base of one fitting neatly into the ashtray below.

While this ashtray’s earthy hue already invokes the natural color of red clay, Wright strengthens the connection to organic materials through the names he assigns to available glazes. For his American Modern series, Wright used terms like “cantaloupe,” “granite gray,” and “seafoam blue” to identify the colors.[3] The mottled rusty hue of this ashtray is “cedar brown”; an ashtray in the collection of the Museum of Fine Arts, Boston appears in “straw yellow.” Such associations between color names and forms from nature help to conceal the fact that a dipping machine mechanically applied the glazes.[4] Therefore, through both form and glaze Wright brought mass-produced ceramic designs in touch with the contours and colors of the organic world.