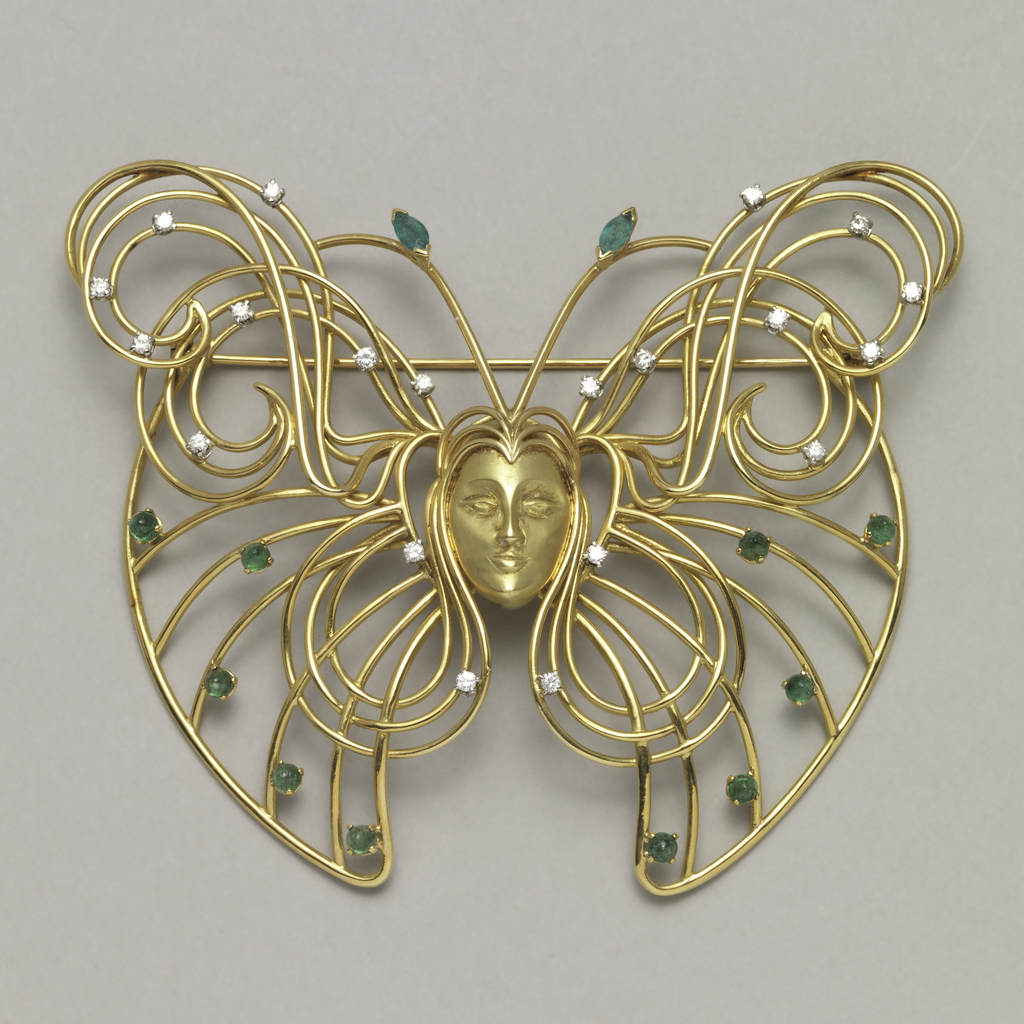 This brooch, entitled Melusine, was designed by Marie-Claude Lalique and dates to about 1965. Made of thin gold wire, the brooch features the face of a woman whose hair swirls and coils into the wings of a butterfly. The piece is enhanced with a scattering of diamonds and emeralds.

The date of 1965 may be confusing because the brooch’s curvaceous design speaks the language of Art Nouveau, a style that was popular from approximately 1890 to 1910. Art Nouveau left behind the historicist styles common during the Victorian era, and is arguably the first original style of the modern age. The movement’s name, Art Nouveau – French for “New Art” – reflects its mission, and it revolutionized design across the board, in fine arts, architecture, and applied and decorative arts. “Rooted partly in the Industrial Revolution, and the Arts and Crafts Movement, but influenced by Japonism and Celtic design, Art Nouveau was given a major boost by the 1900 Exposition Universelle in Paris.”[1] Art and design in this style commonly used flowing, curving, organic lines, and elements from nature like birds, insects and flowers, as well as zoomorphic forms, figures that combine the human female form with elements of animals or insects.

In her brooch, Marie-Claude Lalique portrays an image of Melusine, a literary figure from European folklore. Melusine is a water sprite or siren, often portrayed as a woman with a fish’s tail. She is sometimes illustrated with wings, two tails or both. Certainly, a subject that would be akin to the zoomorphic creations of famed Art Nouveau artists like Lalique’s grandfather, René Lalique.

As noted, this pin dates not from 1900, but to about 1965, the era of Pop art and Psychedelic art. Psychedelic art, particularly as a form of graphic art, came about during the mid-1960s. It freely borrowed elements from Art Nouveau. Posters, album covers and advertising all featured images and lettering reminiscent of those created by Art Nouveau designers like René Lalique and Hector Guimard. This growing use of Art Nouveau elements was to become a trend which by the early 1970s imparted objects with voluptuous, organic line and form, reaching not only into publishing, but cinema and theater, fashion, hairdressing and domestic products.[2] Marie-Claude Lalique was on the forefront of the Art Nouveau revival.

Innovation was a family trait, starting with René Lalique, who began designing glass and jewelry in a little retail shop in Paris in 1905. The business grew and passed to his son, Marc, who was suceeded by his daughter, Marie-Claude, who took over the firm on his death in 1977. Focusing not only on the works in glass for which the company is best known, Marie-Claude added her own elaborate jewelry designs with precious stones and enamel.

One thought on “Two Creative Eras, One Design Aesthetic”

Great selection and description. From whatever date, Lalaque designs please the eye and the soul.