An Ode to Melancholy 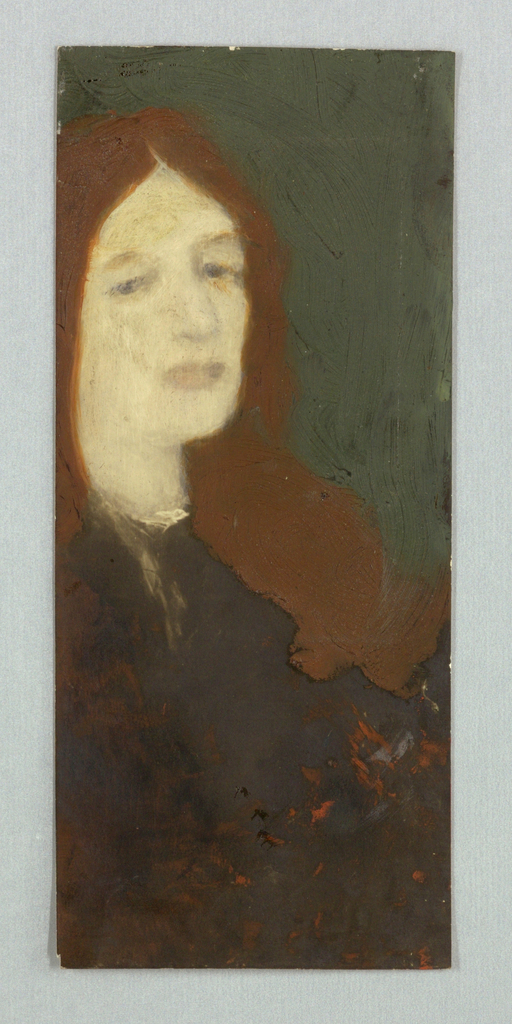 Posted by Josephine Rodgers on April 2, 2018

The identity of the sitter for this composition remains unknown. However, subtle details of the subject’s facial expression accentuate a sense of introspection and melancholy. Distinct contours of the jaw and cheek bones, lips, nose, and eyes were first drawn in graphite. Soft tones of cream and white paint (of varying consistencies and amounts) developed the smooth texture of her skin. Each artistic decision compliments the overall tone of the work and the artist, Harriet Blackstone, paused at certain stages in the creative process to add brief highlights of color. The luminous red hair and intricate pattern of the dress were captured with delicate brushstrokes offering a profound sense of depth for such a small object.

Harriet Blackstone’s artistic talent and ability to capture the inner character of her sitters can be appreciated within the oil sketch Study for a Portrait (ca. 1930s). Born in the rural farming community of New Hartford, New York, Blackstone pursued a career as a painter after years of teaching drama and elocution. In 1903 she moved to Brooklyn to attend studio art courses at Pratt Institute. Following her initial success as a portrait painter in Chicago she continued her formal art education with Jean-Paul Laurens in Paris before World War I. In 1912 she studied with William Merritt Chase on a six-week course in Bruges and toured collections throughout Europe before returning to the United States. In 1921 she moved into the Chelsea Hotel in New York, rented a large studio next to artist Arthur B. Davies, and established a strong reputation.

After exhibiting portraits with a notable intensity of emotion, as observed in Study for a Portrait, Blackstone was elected to the New York Art League, the National Arts Club, and the Meridian Club. This is just one example of the preparatory drawings and oil sketches by Blackstone within the Cooper Hewitt Drawings, Prints and Graphic Design department.