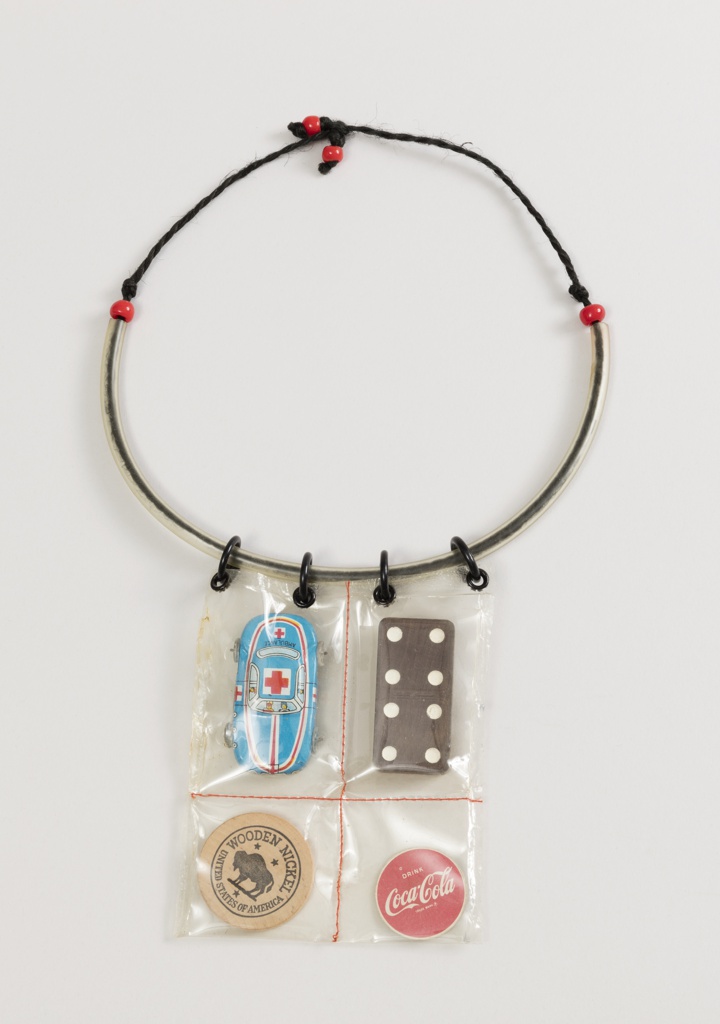 This necklace was made by Ramona Solberg in the early 1970s. It was in her private collection, and until her death she was its only owner. The pendant is a simple interpretation of reliquary jewelry which usually has precious trinkets saved in a small box which serves as a pendant. The use of acrylic and plastic beads on the band and the stylized “amulet” focal point composed of sealed enclosures holding found objects makes this necklace visually alluring.

The necklace is made from mundane materials—hemp yarn, heat formed acrylic tubing, plastic beads and coils, melted and stitched vinyl sheet, and found objects; specifically, a die-stamped tin car, a cardboard bottle cap, a domino and a wooden nickel. The pendant is suspended from four coiled plastic loops on a clear acrylic tube, strung with black hemp cord, which is knotted and strung with four red pony beads. The meaning of the objects is hard to decipher, yet we know that they held great significance to Solberg because out of all her work, there is only one other necklace similar to this one. It is featured in her book, Jewelry Making.

Ramona Solberg was a jewelry designer, craft artisan and teacher. She is probably best remembered for her unusual jewelry designs and techniques, as well as her commitment to education. Of Norwegian descent, she was born in Watertown, South Dakota, but moved to Seattle, Washington when she was a year and a half old. She enlisted in the Women’s Army Corp in 1943 and served until 1950. Afterward, she studied art at the University of Washington and at schools in Mexico, earning both her Bachelors’ degree and her Masters’ degree. She learned metalworking in the United States, weaving in Mexico, and enameling in Norway.

Solberg is considered a pioneer in the contemporary jewelry movement. Her works reflect her many journeys, readable in her designs and choice of materials. She rarely used precious metals or gemstones, instead choosing found objects and foreign elements gathered on her travels. These materials, she believed, made her pieces more interesting and wearable. Wearability was extremely important to Solberg, who believed that jewelry should be worn rather than stored in a vault. Her desire was to create jewelry that was appropriate for any situation, priced so that it was affordable to all.

This necklace is representative of Solberg’s aesthetic and her commitment to the reuse, recycling or upcycling of found objects, which when part of a whole, become precious.