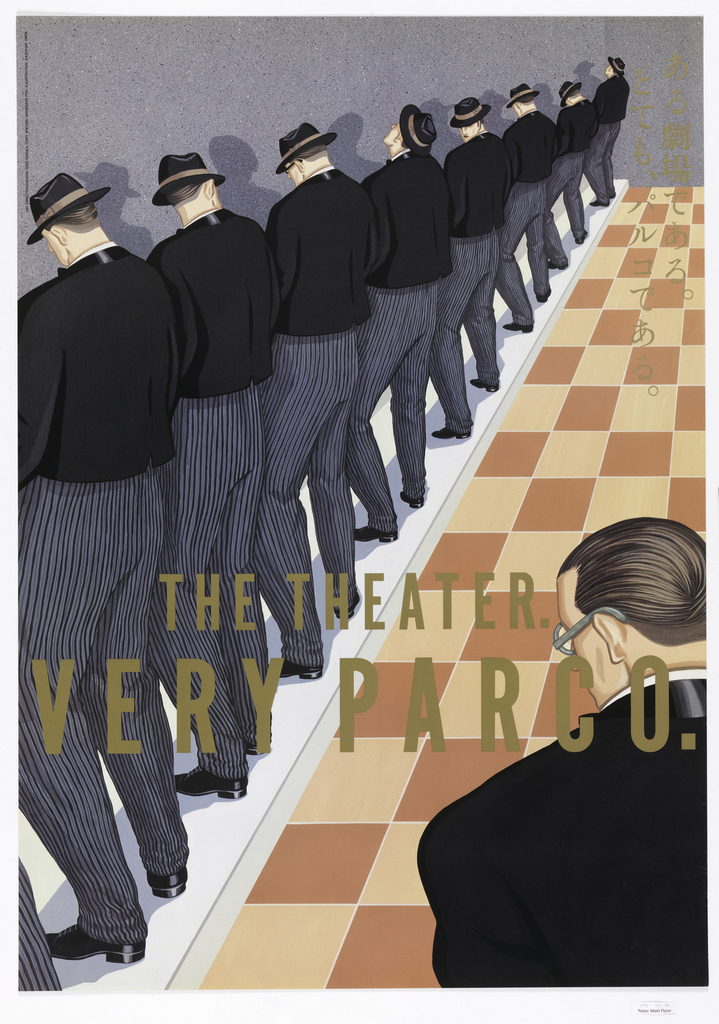 In celebration of Women’s History Month, March Object of the Day posts highlight women designers in the collection. Today’s blog post was written by Kristina Parsons and originally published on March 17, 2014.

Eiko Ishioka was a prolific and revolutionary designer. She contributed enormously to the fields of art direction, graphic design, production, as well as costume design for film, theater and opera. Based in part on her innovative work for the Japanese cosmetic manufacturing company, Shiseido, Ishioka was hired as the chief art director for a new breed of Japanese department store called Parco. The establishment was centered on the philosophy that the Japanese youth needed a platform to establish their identity in connection with the rest of the world, particularly the West. Parco used profits from retail and commercial ventures to fund and support theater, book publishing, art exhibitions and film showings. The poster featured here, The Theater Very Parco, is part of a larger series of advertising images (likely produced in 1980) for which Ishioka served as creative director. Each poster is illustrated by a different artist and features a different department of Parco: shoes, dress, music, sports, kimono, book, restaurant, and theater.

This poster does not showcase a physical consumer product, but rather displays the sensibility of the Parco establishment. In attempting to develop a uniquely Japanese identity in post-war society, relationships between East and West were a particularly prominent aspect of Ishioka’s program for Parco. Her aesthetic is decidedly unconventional and often delves into the realms of surrealism and eroticism in order to jolt viewers out of their preconceived perspectives. Like much of Ishioka’s work, this poster presents and questions voyeurism particularly in the context of the relationship between Japan and the West.

The seemingly bizarre composition features a diagonal row of Caucasian men pictured from behind, all of whom are dressed in identical suits using a long floor urinal. The arrival of a new, distinctly hatless man in the foreground has pulled the attention of one man in the midst of his vulnerable position at the urinal. The rest of the men in line are unaware of the presence of the newcomer approaching them from behind. Ishioka seems to be commenting both on the fascination of Western culture in Japan, as well as the subversion of the stereotypical conception of voyeurism as focused on the female nude (Asian) body.

Kristina Parsons is a design historian and a graduate of the Master’s Program in the History of Design and Curatorial Studies at Cooper Hewitt, Smithsonian Design Museum.