The Woman Behind Artful American Ceramics 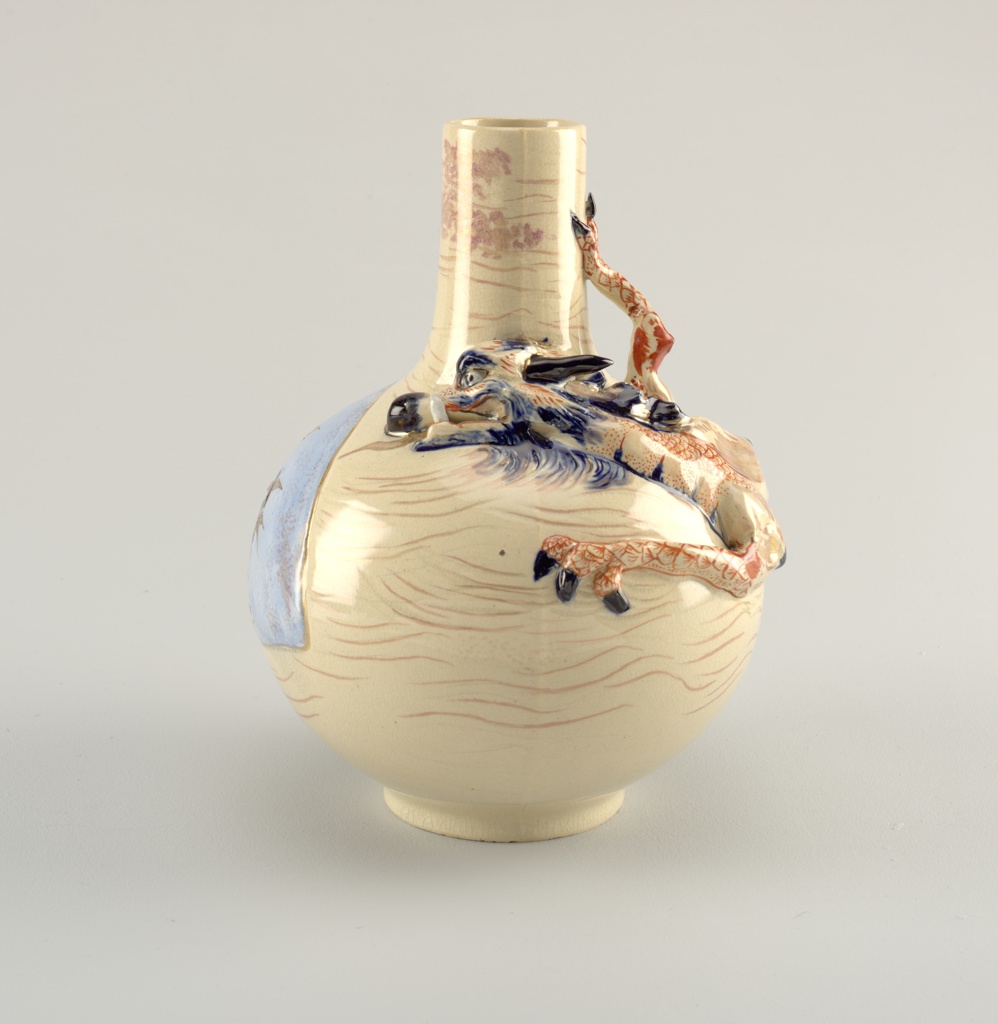 This dragon vase was made at Frederick Dallas’s Hamilton Road Pottery by Maria Longworth Nichols. Nichols worked there before founding her own firm, Rookwood Pottery, later in 1880. This example is marked with a number “3” on the bottom, painted overglaze in red, likely indicating that it was third in a series. As one of a number of vessels that Nichols decorated while working in her small studio at Frederick Dallas’s pottery, this vase is an important example of her early artistic work and shows how Japanese influences guided her designs during her formative years working in ceramics. The vase is bottle-shaped which became a popular form among female ceramic decorators active in Cincinnati at the turn of the twentieth century. The vase uses one of Nichols’ favorites motifs—the dragon. The body of the vase was cast from clay that yielded a cream-colored stoneware body with a hand-modeled dragon encircling the shoulder and neck in high relief with one leg free standing. Cobalt blue underglaze and red overglaze enhance the decorations, which are then highlighted with gilt. On the reverse side is a fan-shaped panel of pale blue underglaze decorated with brown flying birds, cattails and rushes. The mold for this piece was bought by the Rookwood Pottery from Frederick Dallas in 1880 and became their shape number 173, as listed in the Rookwood Pottery Shape Record Book. This shape was first numbered in November 1884.

Nichols’ story is quite remarkable for a woman of the late nineteenth century. She was born Maria Longworth in 1849, and was part of a well-established family in Cincinnati, Ohio. Her education kept in the tradition of wealthy young women, immersed in the fine arts at a young age where she picked up hobbies like playing piano and painting. In 1868, she married George Ward Nichols, who worked for her family cataloguing their vast art collection. In 1873 she began painting china with ceramic chemist Karl Langenbeck. At the same time, she became the first woman in the United States to found a music festival, the Cincinnati May Festival, which is celebrated to this day.

She then enrolled as a student at the Cincinnati School of Design. There she took china painting classes with Benn Pittman, who was involved in the education of women in the arts and the Arts and Crafts movement in the United States. A display of painting on china, including work of Nichols’, was sent to the Philadelphia Centennial Exhibition, as representative of artistic craftsmanship and skill. Over 100 pieces were exhibited, all the work of girls and women. Nichols attended the 1876 Centennial Exposition, and while there she developed an appreciation for Japanese art. Already an accomplished ceramics painter, she returned home to Cincinnati with a desire to incorporate the Japanese elements she saw into her own work.

In 1879, along with her fellow ceramics painter Mary Louise McLaughlin, Nichols commissioned the creation of an under-glaze and over-glaze kiln at a local pottery shop in Cincinnati.  As well as having the kiln built, she also ordered pieces of pottery created to her specifications locally, and then painted them. The following year, Nichols founded the now famous Rookwood Pottery; she was the first woman from Cincinnati to own such a shop. Soon she employed a modest staff consisting of both men and women, including a potter and chemist. Nichols was committed to the development of ceramics as an art, and she encouraged both creativity and the use and development of new materials.

In 1882, Nichols won a gold medal at the Tenth Cincinnati Industrial Exposition for some of her works. In 1885 her husband George Nichols died, and by March of the following year she was remarried to a lawyer named Bellamy Storer. In the wake of her first husband’s death, Nichols’ output lessened considerably. In 1889 she won a gold medal at the Paris Exposition, and that same year she handed her small company over to William W. Taylor (who incorporated the small factory).

Although best known for ceramics in the Arts & Crafts or Art Nouveau styles, the Rookwood Pottery produced superb wares through the 1930s and 1940s, some in a very high Art Deco style. The Rookwood Pottery Company is still around today. The company continues to produce artistic vessels and tiles.

At a time when women of a certain class were not typically active professionally outside the home, Maria Nichols opened the door for their artistic expression. Rookwood, like Pewabic Pottery, the Overbeck Pottery, and the Saturday Evening Girls all provided women with the opportunity to grow as artists and individuals. By the time that female ceramic artists like Maija Grotell and Eve Zeisel arrived in America, women were secure in positions as ceramic artists and decorators.