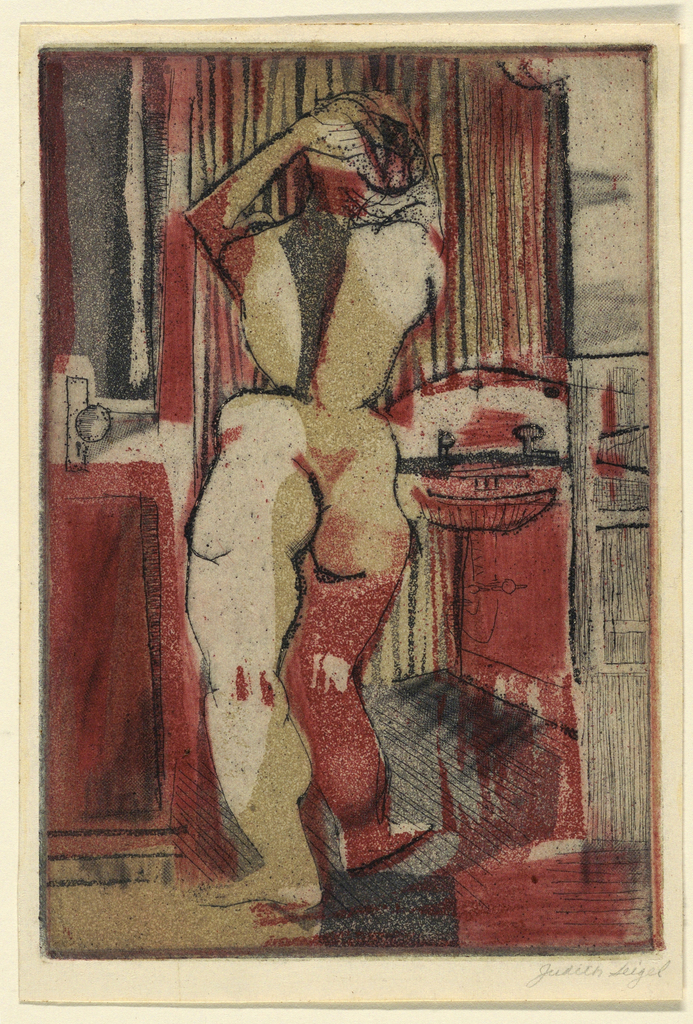 Judith (Judy) Seigel (1930-2017) received a certificate in Art from Cooper Union in 1954 and received a MFA degree in Photography from the Pratt Institute in 1980.  Based in New York City, Seigel was as an illustrator for an advertising firm, a painter, a photographer, a writer, an editor, and a feminist activist. Nude (1951-1952) is an intaglio print from her student days at Cooper Union. The print (measuring only approximately 9 by 7 inches) depicts a traditional art historical subject of a female figure bathing, yet the fractured intimacy of her depiction and manipulation of the printing materials reflect Seigel’s individual voice.

The delicate surface of Nude embodies a mature understanding of printing techniques. The artistic process began by etching the details of the door (including the door knob), walls, floor, window, sink, and body with a series of fine lines into the plate. After carefully applying acid to the plate, a process known as aquatint, certain sections of the door and floor were tempered with a unique texture. Seigel then returned to the plate again with a fine dry point needle—drawing along the figure’s inner thigh, the figure’s right foot, and the edge of the window—to emphasize specific movements. While printing, elements on the plate were wiped clear with dramatic precision, or bathed with ink in a red or faint yellow hue, to undermine conventional methods of perspective. A sense of depth was created on the two-dimensional surface by juxtaposed textures and colors. The scene remains simultaneously familiar, intimate, and intrusive because of the seductive curves and jarring sharp edges.

Much of Seigel’s later work captured the same devotion to process and determination to alter or reject artistic convention. Her photography employed a painterly approach by mixing a range of chemicals during the printing process. In the late 1980s Seigel captured subjects that were often dismissed, including the street life of hustlers in Times Square, with an attention to detail that allowed the final object to radiate emotion. Within Cooper Hewitt’s collection, Nude is an example of how as a young artist she was able to create her own style. Whether inventing new methods for printing or depicting how New York City was changing around her, Seigel remained determined to offer her distinct point of view.

← Building a Better Box
The Woman Behind Artful American Ceramics →