A New World of Color 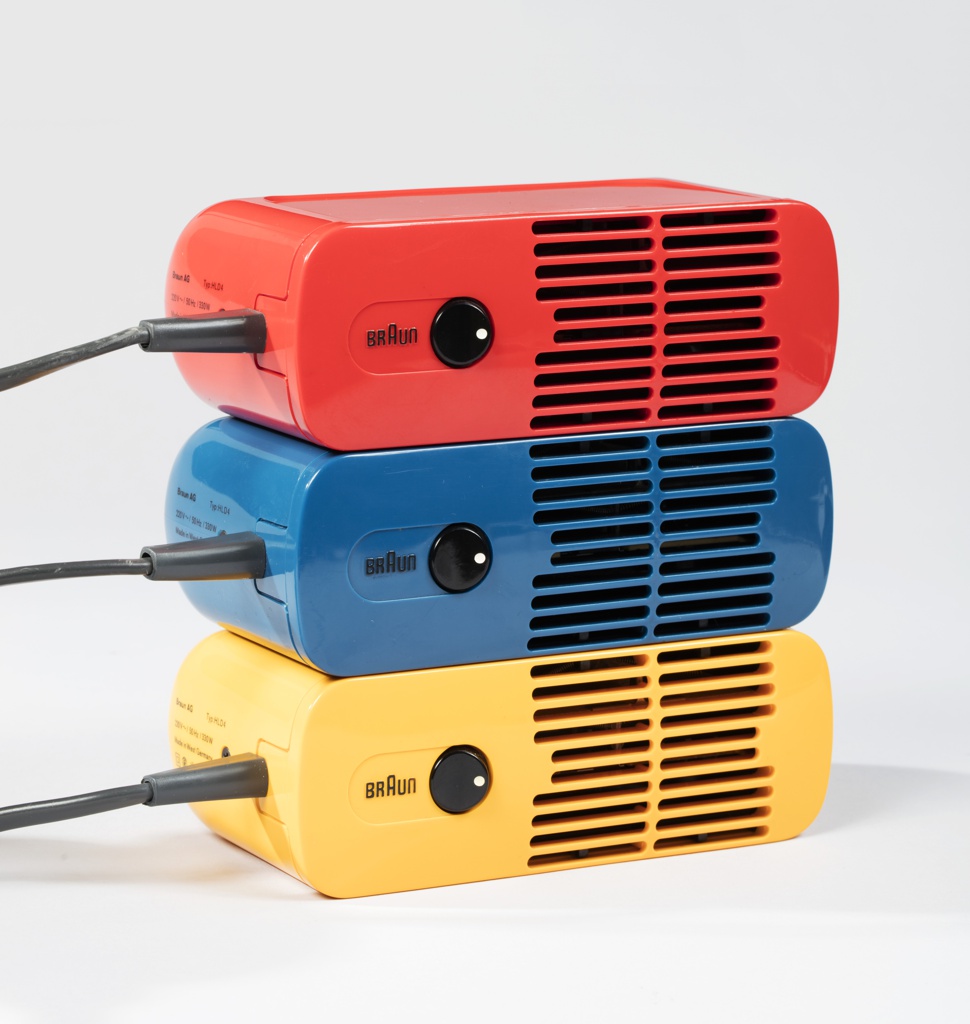 These HLD 4 No. 4414 hair dryers announce a new design idiom for the hair dryer with their rounded rectangular shape and bold colors. On the hair dryer’s front face there is a bisected slotted grill. Two central rows of slits correspond to the placement of a black rocker switch, which is easily operated with the user’s thumb. The Braun logo appears at center left and the unit is completed with its black cord. This compact design was the only hair dryer design created by famed architect and designer, Dieter Rams. The unit’s rounded shape and slotted grill brings to mind Rams’ earlier work with audio equipment that has come to exemplify the simple and intuitive design vocabulary of Rams and Braun.

Inside the case rests a tangential fan which allows for its compact profile, making it ideal for travel. This use of bright, primary colors was a rarity Rams, whose palette ran to neutral colors of white, pale grey, black or simple metallic. This design choice was a reflection of the period in which the hair dryer entered the consumer market. In 1970, when this hair dryer was released, bold color was everywhere, from pop art to the domestic interior. With this in mind, Rams chose the three primary colors, so that his hair dryer would fit comfortably in a modern space. The bright color also made the hairdryers easy to identify in a suitcase of belongings.

In regards to this use of bold color, Rams claimed, “The intention was to create product alternatives for people who wished for strong color highlights in their living environments. This impulse came from marketing—not from design.”[1] In this case, the bold colors were used to attract a male audience, since this product was specifically marketed towards men. Braun offered a number of other colorful plastic objects from the late 1960s onwards including the KMM 2 coffee grinder (1969), “cassette” shaver (1970), and the T3 Domino lighter (1973). Although an attractive style and sleek shape, the HLD 4 hair dryer’s lack of handle caused a logistical issue when in use and created a risk that the user would cover the vents with their hand, therefore causing the appliance to overheat. Future Braun hair dryer models included handles for better grip.

Dieter Rams, whose work is widely recognized, is one of the most influential and celebrated industrial designers of the late twentieth century. During forty years at the German appliance and electronics manufacturer, Braun, he designed or oversaw the production of more than 500 products. Calculators, coffeemakers, audio-visual equipment, hair dryers—whatever the object—had to adhere to Rams “Ten Principles of Good Design.”  He wanted his products to be innovative, simple, user- and environmentally friendly, and pleasant to touch.

These hairdryers can be seen in Bob Greenberg Selects, on view  in the Nancy and Edwin Marks Collection Gallery through September 9th, 2018.

← The Brick
Times Are A-Changing →