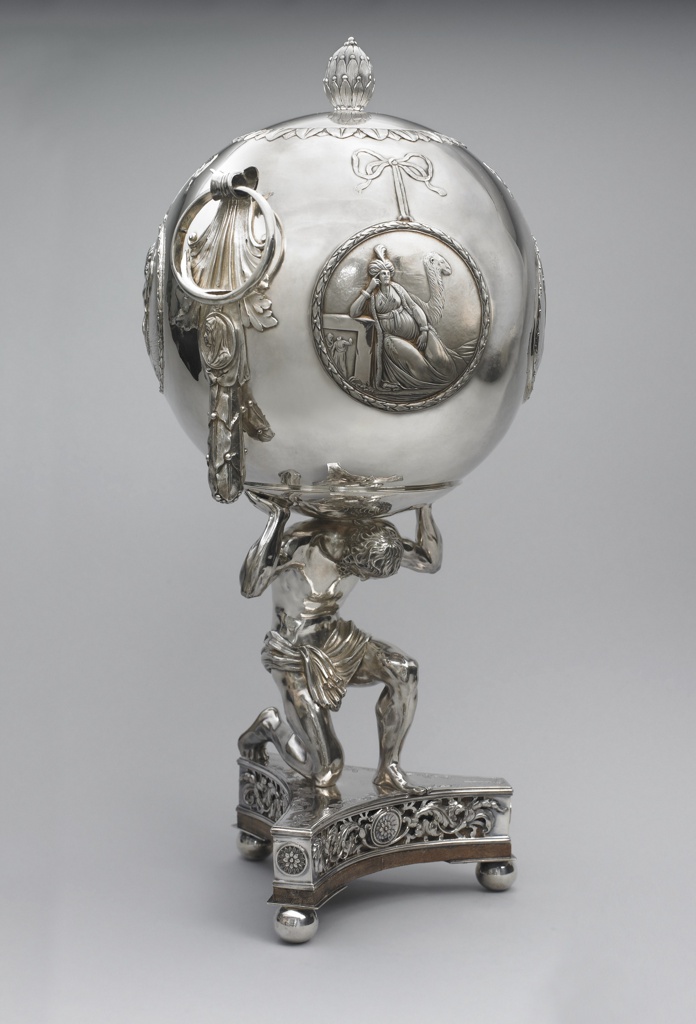 This distinctive tea urn takes the form of Atlas supporting the world. Its triangular base has openwork decoration and rests on three ball feet. The spherical urn is held aloft by the kneeling figure of Atlas, straining as he supports the globe on his shoulders. The surface is decorated with reliefs featuring four wreathed circular medallions, each suspended from a bow and showing one of four allegorical figures of the continents (Europe, Asia, America, and Africa) with their attributes. Two pendant tassels (one concealing a spout) are set below embossed acanthus leaves supporting two ring handles. The slightly domed lid is topped by a laurel-shaped knop in center.

This urn, dated to 1777-78, references two important stylistic movements in British history as represented by its allusion to ancient mythology. During the eighteenth century, Classicism became an important part of decorative style as architectural works became influenced by Renaissance architect Andrea Palladio, whose work itself was based on Roman antiquity. The style’s popularity is evident by the fact that it migrated to “the colonies” as seen in the architectural designs of Thomas Jefferson.

In addition to architecture, Classicism emulated the arts of the ancient world, in particular, Greece and Rome. The late eighteenth century, a period known as the Enlightenment, was a time when highly accomplished individuals strove to implement classic ideals, drawing inspiration from art, literature and music, often embarking on Grand Tours of Europe to learn about the wonders of the ancient world, familiarizing themselves with the sculptures of Rome.

The Greek mythological figure, Atlas, brought to life through Roman sculpture, represents the ideals of stoicism and perseverance. The tale of Atlas tells of his strength of character as he is tasked with the unending job of upholding the world, and his eternal resolution served as a source of inspiration. Sculptures of Atlas have existed since Roman days, and statues like the Farnese Atlas now in the National Archeological Museum in Naples, are evoked by this urn. Classic ideals and the lessons of mythology wax and wane, but never really leave us as seen in the twentieth-century era of Art Deco when Classicism again influenced art, evident in the statue of Atlas in Rockefeller Center in New York City.

The urn also alludes to the expansion of Great Britain and the nation’s growth in the global commercial market. Although not the great empire it would become in the nineteenth century, Britain in the late eighteenth century was dominating international trade due to the strength of its naval forces. By the 1760s, Britain had established trade with China through the East India Company. Tea and porcelain were in high demand and English ships carried these products from Canton to England. From there, the goods travelled around the globe, reaching harbors on other continents. The importance of this trade to Great Britain is read in the four continental reliefs placed upon the globe of this urn.

The theme of the four continents was widely used in this time period, appearing in various forms, from printed materials to decorative objects. Looking closely at the relief medallions, the details representing each continent may be based on engravings of either earlier date or contemporary to the urn. This is not unusual as many of the era’s silversmith-engravers also worked as engravers of artwork as well. In addition, silversmithing was an apprenticed trade in which skill was learned from a trained master who passed along images and motifs as well as techniques. This tea urn was donated to the museum as part of a gift from James Hazen Hyde, an early twentieth-century collector of things displaying this theme. His gift provided the museum with a broad and varied collection of objects referencing the four continents. Other examples of this theme in the Cooper Hewitt’s collection include a glass goblet, printed textile, a pen and ink drawing and ceramic tiles.