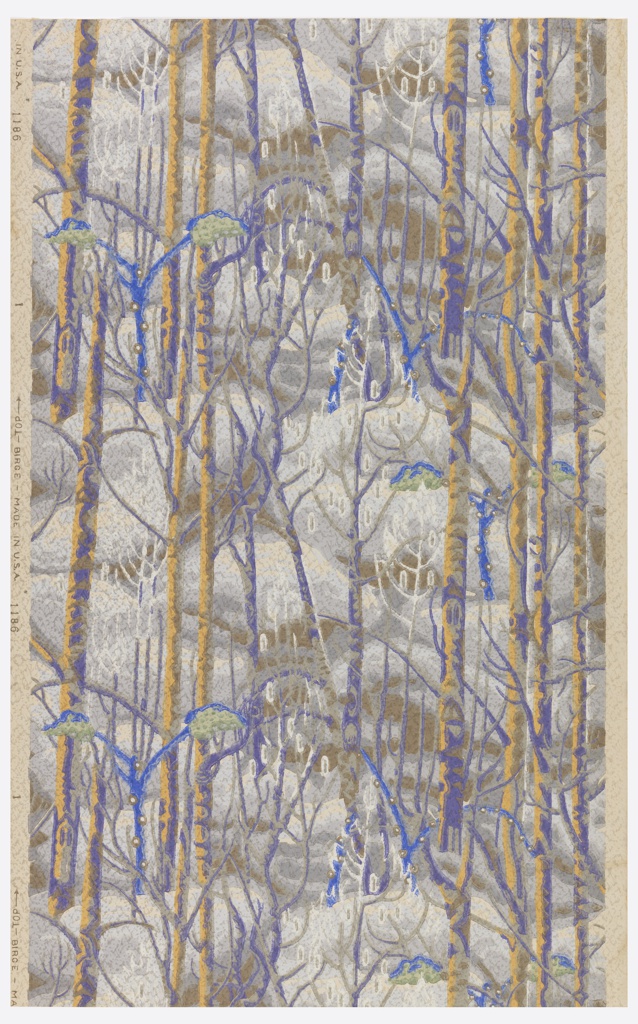 With the hustle and bustle of the holiday season coming to an end, and the end of the year upon us, it is always nice to have a moment of reflection and calm before jumping into the New Year. This wallpaper, aptly entitled “The Birches”, seems to echo such a sentiment with its cool color pallet and meandering lines. Rows of birch trees weave across the composition of the paper as blue branches and white, leaf-like motifs are interspersed throughout. A light dusting of snow sits upon the branches and forest floor that pokes through the dunes of white in swirls of light brown. Far away from the noise and lights of the city, it is easy to imagine oneself walking among the trees, bathed in dappled light that filters through the multicolored branches.

“The Birches” was designed by Charles Burchfield who is known for his watercolor paintings which he created during the early-twentieth century. In the 1920’s he began designing wallpapers for the wallpaper firm M. H. Birge and Sons. He started working with the company in 1921 and continued creating wallpaper designs for them until around 1929. M. H. Birge and Sons started as a firm in 1834 and was well-known for their production of imitation leather papers during the early 1900’s. A paper such as the one seen here would most likely have been installed in a sitting or dining room.

One thought on “Cool Weather Calm”

How lovely! Thanks for sharing, Lucy.