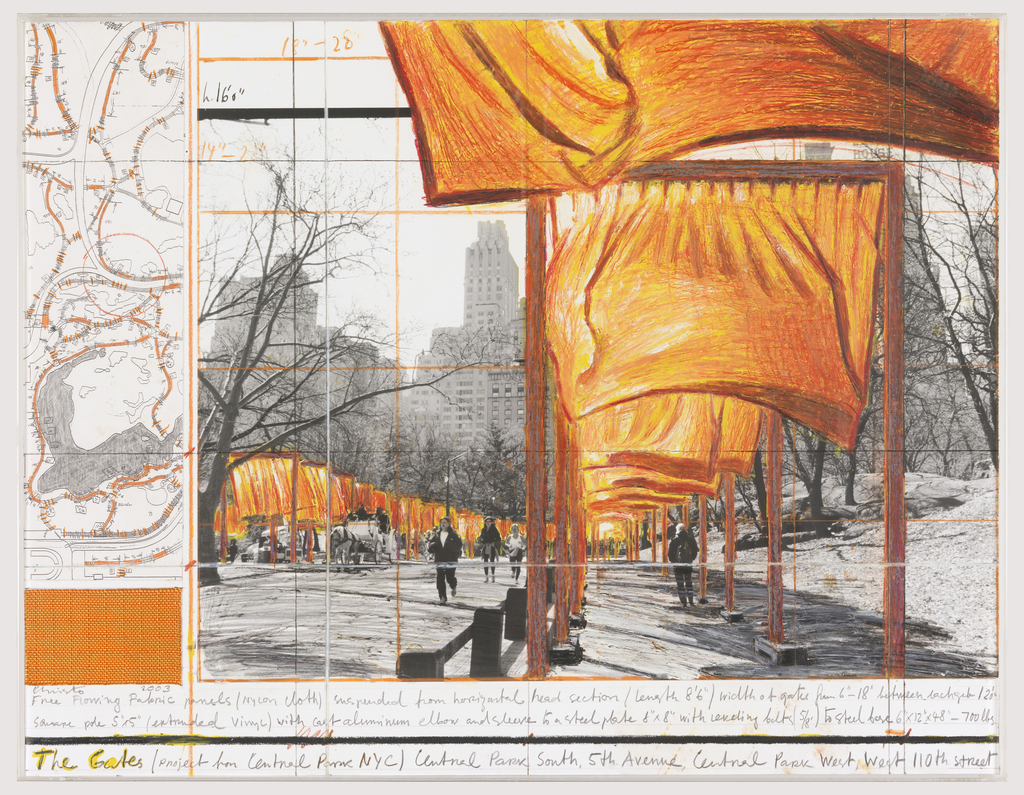 Pumpkin-orange! Motion! These are just a few words that come to mind to describe this collage by artists Christo and Jeanne-Claude. This bright, dynamic work presents a plan and rendering of The Gates, a public art installation that filled the winding walking paths of New York’s Central Park with 7,503 rectangular structures draped with flame-colored fabric panels. At the left of the collage, an aerial view shows the plan of the installation as it danced through twenty-three miles of Central Park in February 2005. At right, an artistic combination of photography, colored pencils, and paint depicts an energized segment of The Gates, highlighting the contrast between the vibrant orange fabric and the stark winter trees.

Christo and Jeanne-Claude’s earliest collaboration was Dockside Packages, a temporary installation in Cologne Harbor in April 1961 for which the designing duo wrapped shipping containers and oil barrels in tarpaulins along the Rhine riverside.1 September 1976 marked the completion of another project, Running Fences. For the process-driven work, the artists stretched over two million square feet of white fabric across Sonoma and Marin counties in Northern California, an ephemeral installation that likewise lasted two weeks. Christo and Jeanne-Claude first applied for a permit for The Gates in February 1981—the artists waited more than twenty-six years for this dream project to be approved by the New York Department of Parks and Recreation.2 The final installation “celebrate[d] both the organic beauty and varied topography of Central Park and the grid structure of the surrounding city.”3 The Gates was the last public art installation the couple produced together before Jeanne-Claude passed away on November 18, 2009, in New York City. Christo is still actively working—his first project completed without his partner is The Floating Piers, which was displayed in Northern Italy July 2016.

With regard to his process drawings, Christo has stated, “The drawings are a small factor in the larger project—as they are for The Gates—from which we learn many things. . .the right proportions, dimensions, color, and so on. All these things I cannot decide in the studio; all these new elements come from reality. It is reality that gives energy to the drawings.”4 It is electric! The movement in this piece allows one to imagine walking through the illuminated pathway hearing gusts of winds harnessed in the autumn-inspired flags flapping overhead. This complex collage materializes the energy of The Gates at Central Park.

This post was written by Amanda Chambers-Burt, who is a Curatorial Intern in the Department of Drawings, Prints & Graphic Design at Cooper Hewitt, Smithsonian Design Museum.

3 thoughts on “The Gates”

I’m so grateful to you for providing interesting, informative videos.

i remember the marvelous experience of walking through the gates on a snowy day. it was an indescribable experience because of the orange fabric contrasting with the white snow and bare trees.
thank you for providing this collage that brings back such calm, beautiful memories of central park in manhattan.

Thank you for posting a celebratory remembrance of NYC in better times. It helps us through these coronavirus times.