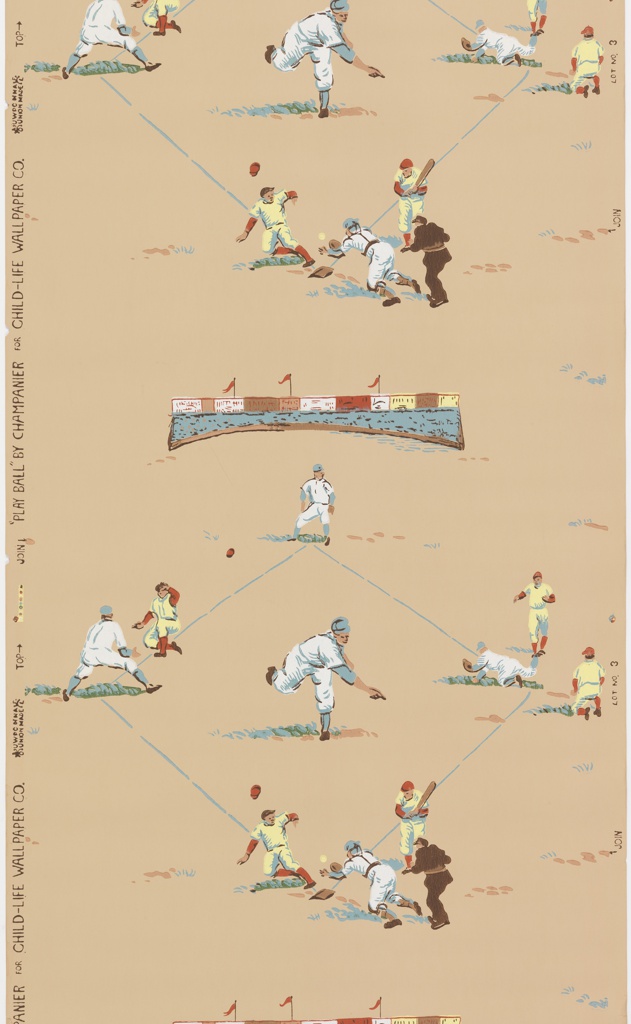 With the culmination of baseball season upon us, it seems appropriate to turn our attention to this cheerful wallpaper from mid-century. Play Ball shows a single repeat of an ongoing baseball game printed on a light tan background. The scene is extremely dynamic as each figure engages with the action on the field. At home plate, the scene is tense with the base runner on his way towards the catcher who is mere seconds away from catching the ball and tagging him out. Meanwhile at third, the base runner is poised to successfully slide in. Other players around the field are also engaged in dynamic movement as the pitcher completes his release and the umpire gets into position to officiate.

During this time period there were a variety of playful papers being produced for children’s rooms that depicted popular hobbies and media. In the post-war population boom, wallpapers for children became very profitable on the market as the economy stabilized. This particular paper would have been marketed towards boys due to its sporting theme. It would have been reasonably affordable as well due to its simple color scheme and mass production by the manufacturer. Popular themes for boys wallpaper at this time also included depictions of the outdoors and other sports such as hockey.

Child-Life, the manufacture of this paper, which was founded in the late 1950’s by A. A. Champanier, created wallpapers for both genders. Some of their most prevalent designs featured well-liked Disney characters such as Peter Pan. In addition, they also had a line of charming nursery room paper.

← Not Your Grandmother’s Teapot
Okay, Bye →