Not Your Grandmother’s Teapot 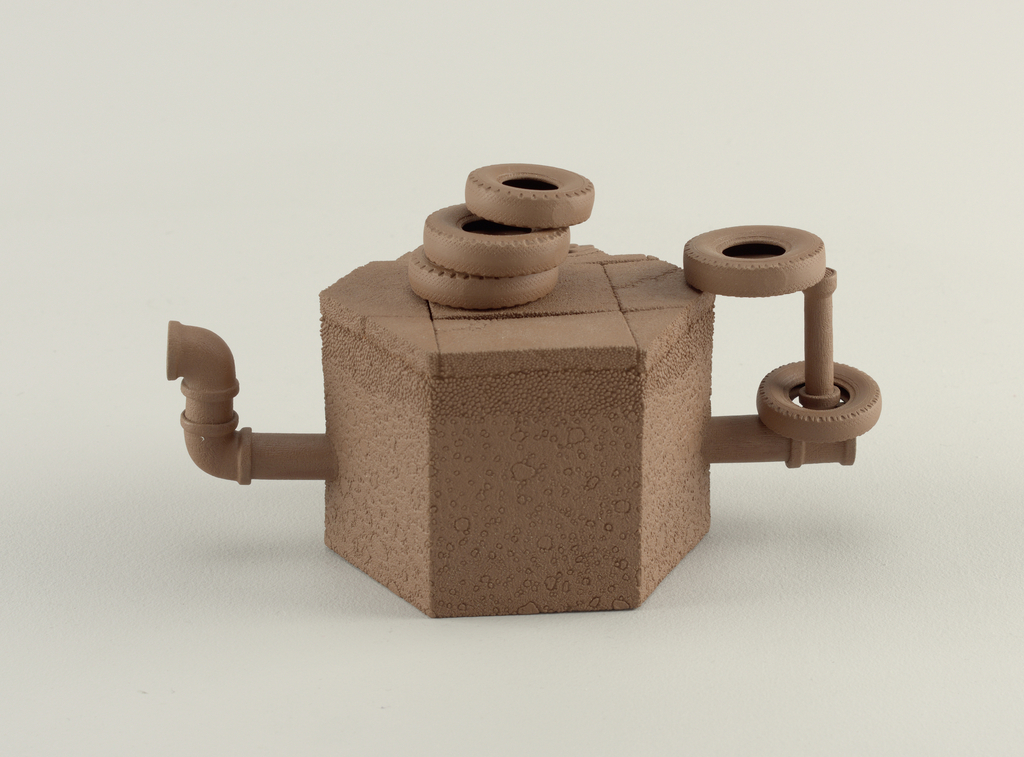 This teapot by the American ceramicist, Richard Notkin, draws its material influence from Chinese Yixing clay teapots. This type of clay is found in China in the city of Yixing in the Jiangsu Province, and is typically a red or brown color. While the clay has been used to create many different wares, the most common are teapots and other tea-related items. Yixing teapots are not glazed, and are often very simple forms so heat is distributed evenly. The clay is porous and with use of the pot over time, tea oils build up inside the vessel, creating a special sheen in the clay.[1] Generally used with black, pu-erh, or oolong teas, tea connoisseurs will refrain from brewing more than one type of tea in a given pot to avoid mixing the flavors and the effects upon the clay body.

This Yixing-inspired teapot is anything but simple. Created by Notkin in 1985, unlike simple, traditional Chinese forms, this teapot has an octagonal body modeled to resemble a subterranean cross-section view of a street and sidewalk. The handle and spout resemble sewer pipes, and five clay tires serve as the knob of the lid and decoration. The teapot is part of a series based upon the Yixing teapot, but conceived by Notkin as part of his self-proclaimed “art activism”.[2] Other designs in the series are his Curbside Teapot and Cooling Towers Teapot. His works embody commentary on human relations and the human condition, and often critique war, violence, and oppression.[3] Notkin grew up in Chicago’s South Side, witnessing religious tension and hearing about the horrors of the Holocaust from his Jewish neighbors. Notkin aims to stimulate the viewer to examine their innermost feelings by manipulating and juxtaposing objects.[4] In his studio in Helena, Montana, he asks questions and answers them with clay. His creations, such as this teapot offering a view under the surface, invite viewers to ponder the world, one vessel at a time.

[1] Daniel Lui, “How to Choose A Chinese Teapot,” The Chinese Tea Shop, http://www.thechineseteashop.com/how-to-choose-teapot.html.