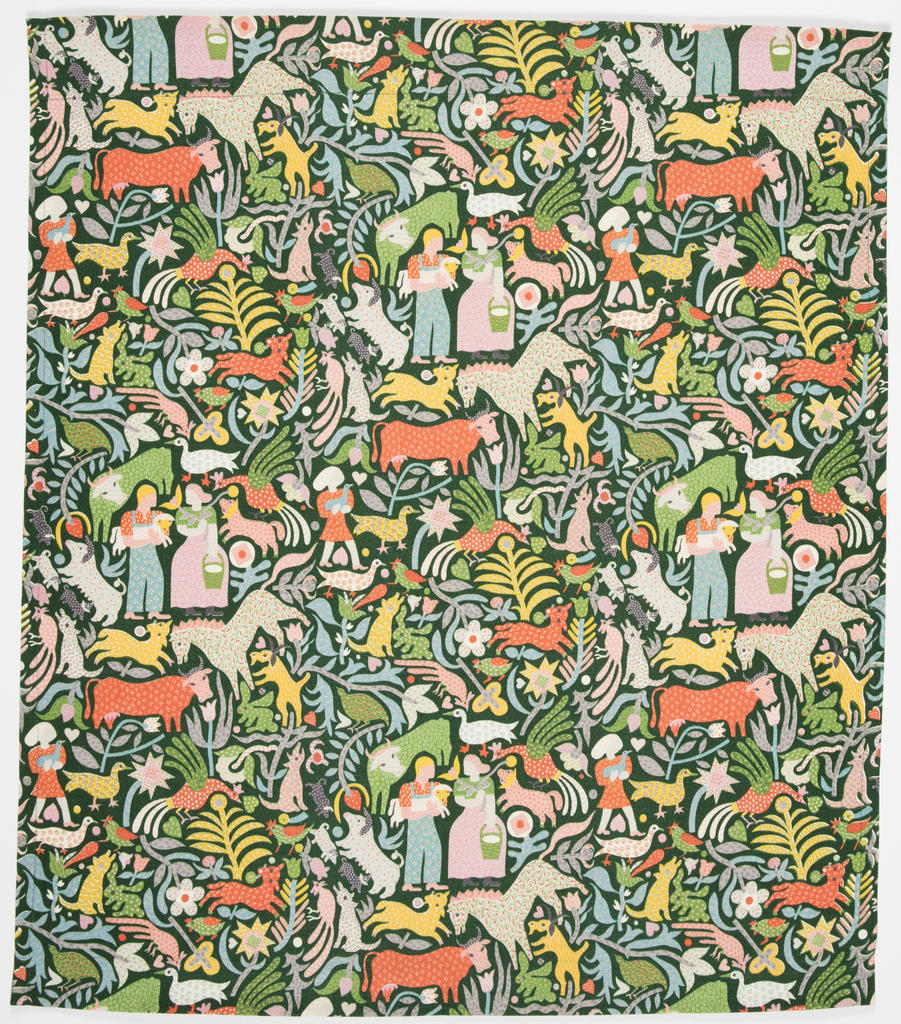 The issue of The New Yorker dated August 19, 1944 had a curiously wholesome cover. A farmer, holding a lamb, and his wife, armed with a bucket, were surrounded by farm animals and flowers. They were faceless and a bit flat, but expressive nonetheless, with the appearance of having been cut from bright calico cottons and arranged like puzzle pieces until they fit together just so.

The ensuing pages were filled with rural American scenes, wistful references to peacetime, advertisements centered on freedom and bravery, and tongue-in-cheek visions of what life would look like after the war. In an installment of “A Reporter at Large,” A. J. Leibling wrote poignantly from Normandy, where he was stationed. He counted the land’s cattle among the innocent casualties of the war, their heavy presence punctuating his memories of each abandoned farmhouse. In one home, he discovered a stack of letters from thirty years prior, written by another soldier—a counterpart of sorts—during the First World War to his beloved wife, who had stayed behind at this very farm. “Dear little Louise,” the soldier had written, “I hope you are well. Also the cows and calves. Butter is selling at a pretty good price, if only it can continue. I was glad to hear you had someone help you thresh the buckwheat. Dear little Louise, I wish I could have been there, but it’s useless to think about it.”

The magazine’s cover, which might be read as a longing for simpler times, was one of 186 created for The New Yorker by Ilonka Karasz, a Hungarian-born designer who was one of the first women to be admitted to the Royal Academy of Arts and Crafts in Budapest. In 1913, she came to the U.S., where she became an important member of the New York art scene and a designer of modernist furniture, textiles, and wallcoverings. Nearly a decade after her Calico Cow design graced the cover of The New Yorker, she became involved with Associated American Artists, a collective whose founder, Reeves Lewenthal, believed in marketing fine art to the masses. Through Associated American Artists, Karasz adapted Calico Cow into a repeating print and submitted the design to Youngstown Kitchens. The kitchen cabinet company selected her work for the launch of a collection of coordinating fabrics, wallcoverings, and decals meant to soften the sterile feeling of the era’s white appliances and white steel cabinets. (1)

By 1952, when Calico Cow (pictured here) was released by Riverdale Fabrics, wartime was safely behind the American public and the somber interior décor of the 1940s had yielded to colorful, whimsical designs. Middle-class women had given up their jobs and returned home en masse. New appliances and other inventions meant to streamline the housework had, in fact, increased expectations, while the practice of relying on domestic help had fallen out of favor, leaving housewives busier than ever. Calico Cow would have suited those who were eager to redecorate in modern styles—but couldn’t help imagining a simpler life.

← Rotherhithe
Design that Predicts the Future →

One thought on “Simpler Times”

I love this connection. I hadn’t seen the Bavaria pieces before but I think you’re onto something!