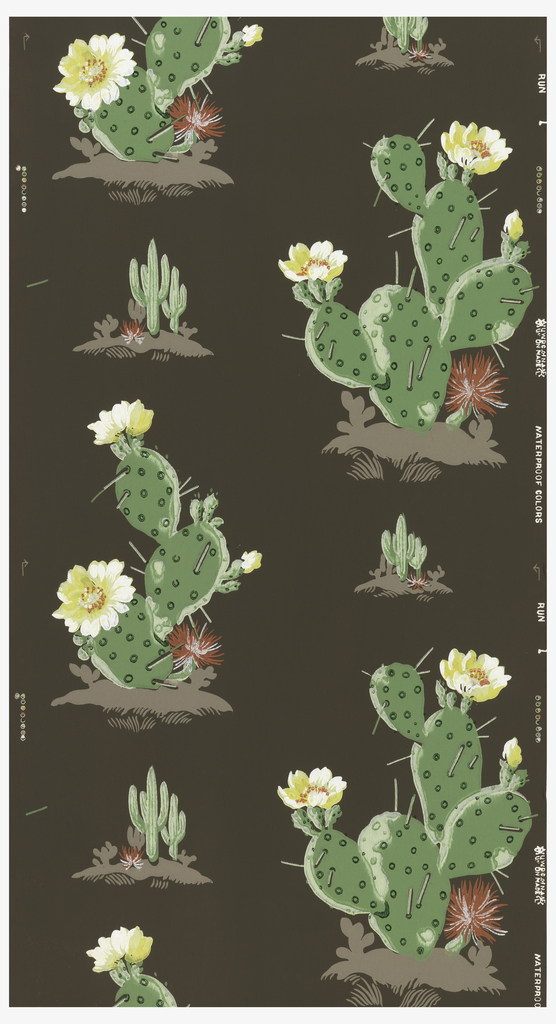 Posted by Gregory Herringshaw on October 12, 2017

During the time period that this wallpaper was produced, the United States was experiencing some political unrest due to the ramifications of World War II. During the war years all artistic and design related activities slowed down substantially as manufacturers were unable to introduce new patterns as raw materials were reserved for the war effort. Modern historians, at least in wallcoverings, often call this period a creative dead zone as original design faltered. Following the war, wallpaper companies came out with collections of fun and lighthearted designs which may have contributed to this piece’s simple but charming desert themed pattern.

While the manufacturer of this paper is unknown it was produced by Union workers and bears proof of this with the Union label printed in the selvedge. The design of cacti and the desert may seem strange to a contemporary viewer, but was on trend during its production period, due to the popularity of nature themes and romanticizing of the “American Grand Tour”. In contrast to the original “Grand Tour” which was typically taken by upper middle class and upper class gentlemen to ancient sites in Europe, predominantly in Italy and Greece, these gentlemen would now seek out adventure in the American wilderness. Popular stopping spots on the “American Grand Tour” would have included sites such as Niagara Falls and the Grand Canyon, which remain popular destinations today. The desert, as challenging terrain, could have been a popular spot and thus suitable for depiction. Emblematic wallpapers, like this one, were also popular because they showed condensed geographical features that allowed the viewer to imagine themselves in another location for a while.