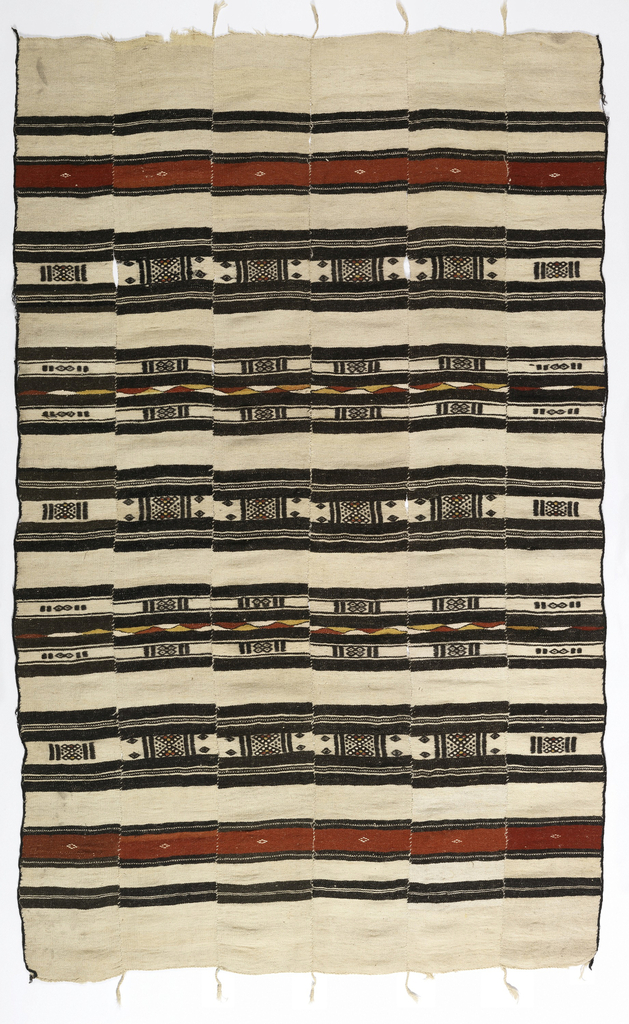 Those of us who have experienced the hot, humid summers of the temperate zones might be surprised to learn that this soberly composed wool textile was produced in a subtropical river village from local sheep that were pastured directly south of the Sahara desert. These textiles, known as kaasa, were used as warm blankets against the chill night air of this arid land, and as protection from the mosquitos that proliferate in stagnant water. Highly esteemed by diverse ethnic groups, they were traded across the Sahel region of West Africa, and it is not surprising that this blanket is recorded to have been acquired in Nigeria. They were also appreciated by colonial officials, ethnographers and other travelers to West Africa, and today distinguished examples can be found in museums and private collections in North American and Europe.
Sheep herding, although increasingly difficult to sustain, continues in this semi-arid region between the desert and the tropical forest. Historically, Fulani pastoralists have managed these peripatetic herds of sheep and cattle; consequently, they too are widely dispersed across this region, as one of the largest ethnic populations in West Africa. Across the centuries, the Fulani became roughly divided into two groups: those who continued their longstanding pastoral culture and those who became urban dwellers. Further class divisions between these two groups are recorded. Fulani sheep herding was historically centered along the Niger River, in the region where the river passes through the narrow neck of Mali, near Mopti, and into southwest Niger. The yearly rains that flood the inland river plain in the center of this region provided sufficient water to pasture herds of sheep through the following dry season. In nearby villages and towns, a settled or semi-settled artisan class of male Fulani weavers, known as Maabuube, wove kaasa blankets.
Over the past forty years, a small group of scholars has recorded certain details of production. In summary, Fulani women of all classes spun and dyed yarns, and highly skilled artisans of this work were sought out by those commissioning the most luxurious blankets. Yarns for weaving a kaasa could be purchased in the markets by the person commissioning the blanket. Alternatively, a woman spinner/dyer of means could supply the yarn, support the weaver while he worked, and pay him for the finished product. The wool of sheep raised in this sub-tropical region can be harsher and more hairy than the wool of sheep raised in cooler climates, and yarn of lamb’s wool was prized for its softness. Washing blankets also softened them. Cotton is also sparingly used in the decorative supplementary weft of some Kaasa. However, cotton can also be used for the warp; such blankets are reported to have been developed in the second half of the 20th century. Although men weave the individual strips, their assembly into a completed cloth, often with additional embellishments to all edges and the center seam, was carried out by women.
All kaasa are composed of six pieces of narrow cloth. In this restrained example, the width of each strip is approximately 9” (22.9cm). The woven structure is invariably a weft-face plain weave. Here, the undyed white wool serves as a background for a series of nine, more or less evenly spaced, horizontal bands of differing widths. Adjacent to the narrow black and white terminal band at both warp ends, is a minimally embellished rust-red band. The location and color of such bands are a distinctive feature of many kaasa. The remaining five middle bands contain a series of geometric motifs, created with supplementary wefts in black, red and yellow. As an additional embellishment, “knots” of undyed white cotton, likely applied with a needle, highlight the black wool. Here, the wide black bands, slightly relieved by either narrow white lines or undulating “ribbons” of yellow, red, black and white, surround smaller rectangular blocks containing conjoined full and partial diamonds. The heavy bars compress the lighter geometric patterns, creating a feeling of tension or power, held in check.
The design symmetry is organized so that the bands are reflected across a horizontal axis that runs through the middle of the center band; the individual motifs are also reflected across the vertical axis, which is congruent with the center seam. This combination creates a well-balanced ornamentation. It is important to know that all this technical information is held in the memory of the weaver, who uses his hands and simple tools to maintain the proportion and spacing of the elements, so that when the individual strips are aligned, side by side, the motifs match, more or less exactly. This feat is all the more astonishing, when one learns the weaver is working from what will become the back of the textile, and since it will be visible to the eventual owner, it is neatly finished. Christine Giuntini is the Conservator responsible for textile and organic artifact conservation in the Department of the Arts of Africa, Oceania, and the Americas at the Metropolitan Museum of Art.

← The Cutting Edge
Grey on Grey →