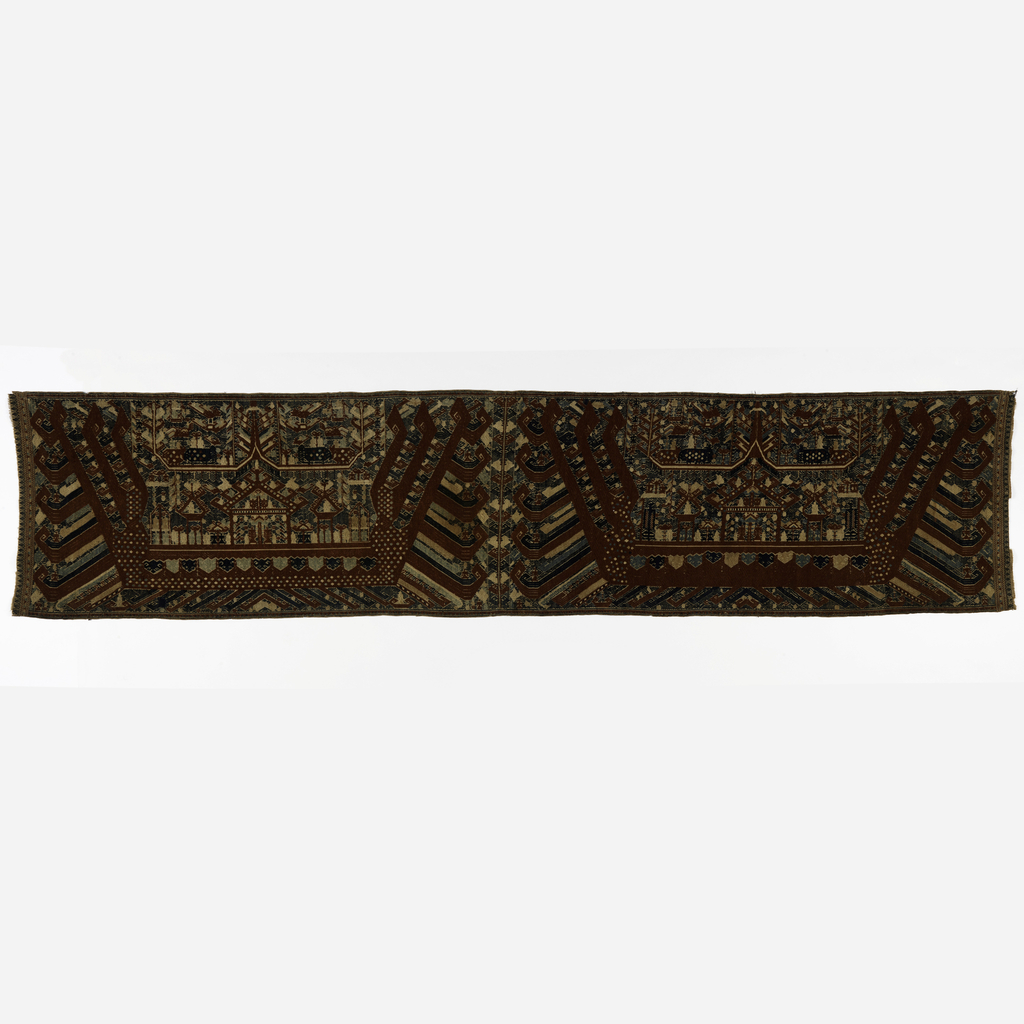 September is New York Textile Month! In celebration, members of the Textile Society of America will author Object of the Day for the month. A non-profit professional organization of scholars, educators, and artists in the field of textiles, TSA provides an international forum for the exchange and dissemination of information about textiles worldwide.
Perhaps the most iconic of all Indonesian textiles is the Double Red Ship Palepai of the Paminggir people, from the royal community of Kalianda, located in the Lampung District, in southern Sumatra, Indonesia.

Kalianda is considered by all ethnic groups of Lampung to be the mother of Lampung adat, the customary law that guides all proper behavior including the weaving of textiles, color, iconography and their ritual use.

Cooper Hewitt, Smithsonian Design Museum is fortunate to possess one of the finest of this rare genre known. A superb example in every sense, it is clear by the fabulous rendering of the iconography the weaver “understood” the language of the motifs she was encoding in the textile and was not blindly replicating as we see in later examples when the connection to the root culture has become attenuated. The depth of the dyeing of the indigo blue, sepang (Brazil wood) red, and natural white, is fabulous and represents the three primary colors of the Austronesian cosmology: black, white and red, representing duality and blood.

A palepai is a long cloth measuring between 250cm and 500 cm in length but never more than 75 cm in width, delimited by the distance the weaver’s arms can span in passing a weft back and forth on a back strap loom.

A design is created using a textile patterning method known as supplementary weft. Beginning with a balanced plain weave that will hold the textile together structurally, the weaver introduces decorative weft threads that pass across the back of the textile as floats that dip to and fro creating a motif, being tacked down along the way and making little background geometric diamonds, dots, and lines, with the principal side featuring clean and clear drawing. And to think the weaver is keeping track as she is working side ways, perpendicular to how the motif will be read when it is displayed. Pattern sticks may have been used is some cases but great credit need go to the genius weaver who could monitor the complexity of this fine cloth from memory.

In reviewing the iconography of this palepai, we see two symmetric grand red ships with arching bow and stern elements, left and right, with diagonal oar-like extensions descending from the hull that may represent oars, like an old Roman galley. Moving our eyes up from the bottom of the textile to the top, we encounter a repeat pattern mid-hull that could be a stylized water buffalo head, metrically repeating in alternating light and dark blue. Arriving to the primary deck, there may be found a large central pavilion with a hooked roof, the palace replicated in smaller scale to both sides, with yet two other architectural structures furthest from the center, all known to represent “the house of the ancestors.” And indeed, ancestors may be discerned as light and dark blue, pale yellow and white figures within these structures, including the roof, with the progenitor mother and father in larger size and red color in the central house.

Royalty is signaled by presence of many umbrellas, an old tradition acquired from India and dating to the arrival of Buddhism and Hinduism to Sumatra in the 7th century; symbolic but practical, the parasol served to protect nobles against the harsh sun. Also seen are two flagpoles with triangle banners in pale hues. There are two small boats with ancestors and umbrella free floating in space, left right, as we rise to the upper third of the tableaux.

There begins an upper deck, or roof, demarcated by a thick white horizontal line with Trees of Life rising in the center and at each end. This level is populated with pairs of elephants in blue and red, peacocks and other birds, and little ancestors standing on small boats. Note another set of flags.

There are various theories about the meaning of this highly significant motif.
Dr. Alfred Steinmann of the Zurich University Volkerkunde Museum published, The Ship of the Dead in Textile Art, 1946, noting a commonality in the Egyptian myth of a boat required to bring the dead across the River Styx to the next world. Dr. Mattiebelle Gittinger of the Textile Museum of Washington, DC wrote her PhD thesis on the subject. At the time of her research, in 1973, she felt that red ships could be interpreted as birds, instead of bow and stern, wings supporting the greater community. Lampung scholars Garrett and Bronwen Solyom proposed that what is presented is not a ship but rather a depiction of a classical Austronesian House possibly dating as far back as five thousand years. In Lampung these traditional homes have spiral elements extending from the terminals of the house, interpreted to be possibly fern fronds, which are a fertility motif because they can grow with such vigor. This author noticed that when the ship was folded in on itself so that only the arching bows were joining, the motif greatly resembled a Tree of Life, and speculated that when pulled apart in a “Big Bang” we have the replication of the Lampung creation myth…that the primordial tree grew up from the underworld into the upper world and then broken into hundreds of pieces, forming the first water buffalo, horses birds, fish, rice paddies, and humans.

The current conception of the significance of the two ships is that they represent two families coming together at a wedding. The ship, rather than transporting the dead, is more of a “life boat” intended to ensure safe passage of individuals and the community through “life crisis passages,” birth, puberty, marriage, attaining a rank in society and funerary rites, all part of the human condition.

Always rare, and normally found only in early museum collections, these cloths were restricted to the highest level of society, serving as a badge of royal affiliation. Their presence at a gathering of nobility indicated that the owner was a clan chief, head of a marga, had performed all the necessary feasts of merit rituals, and had been authorized by the ruler of the region the Banten Sultanate of West Java to be able to participate in the very lucrative pepper trade. From the spice came the wealth that supported the complex and costly ceremonies required to maintain the status permitting the use of a palepai, also known as a sesai balak, “great wall.”

Thomas Murray is an independent researcher, author, collector and private dealer of Asian and Tribal art with an emphasis on Indonesian sculpture and textiles, as well as animistic art from other varied cultures.