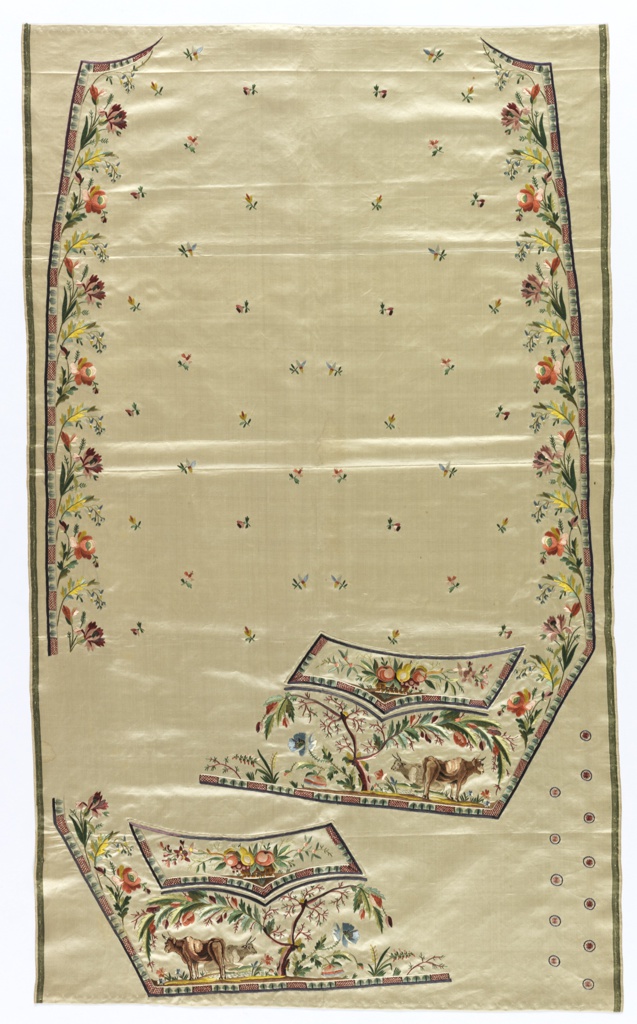 Posted by Kimberly Randall on September 11, 2017

The 18th century marked an especially lavish period in men’s fashion, as styles followed the influences of the French court at Versailles. Consisting of a waistcoat, breeches and coat, the 18th-century men’s ensemble set the precedent for the 3-piece suit, today’s male business uniform. Each piece was elaborately embellished with coordinating motifs to display the gentleman’s style, wealth and status.

The border pattern that would follow the waistcoat opening is embroidered along the selvedge edges with small scattered motifs extending the embroidery across the full surface of the waistcoat. The pocket flaps were usually the area of the heaviest embroidery as their motifs were designed to fit into the shape of the pocket flaps and the border along the opening turning the corner to the hem. Even the buttons were embroidered, extending the design and materials to every detail. The buttons, seen in the bottom right edge of the yardage, were embroidered as small circles that would be wrapped around a small disk or ring.

Natural motifs dominated the embroidery designs on both men’s and women’s fashion during this time, often showcasing rare flowers to emphasize the wearer’s status through the display of the exotic. The motifs in this waistcoat combine floral motifs with pastoral scenes illustrating the contemporary interest in naturalist philosophy and the influence of Jean Jacques Rousseau. As the pastoral scenes are finely embroidered on silk with silks, one cannot help but be reminded of Marie Antoinette’s hamlet at Versailles.

Flat (untwisted) silk embroidered in satin stitch or modified satin stitch was a common technique employed. The long, flat floats of the stitches magnified the shine of the silk. Many examples of these waistcoats, such as this piece, used solely silk for the embroidery. It was also common to mix the silk embroidery with metal embroidery for an even more ornate surface.

The process of preparing the fabric for embroidery and descriptions of the embroidery techniques are described in great detail in Art of the Embroiderer, a book written by Charles Germain de Saint-Aubin, the embroiderer to Louis XV, in 1770.

Katherine Diuguid is an Assistant Professor of Art+ Design at North Carolina State University specializing in embroidery technique and history.