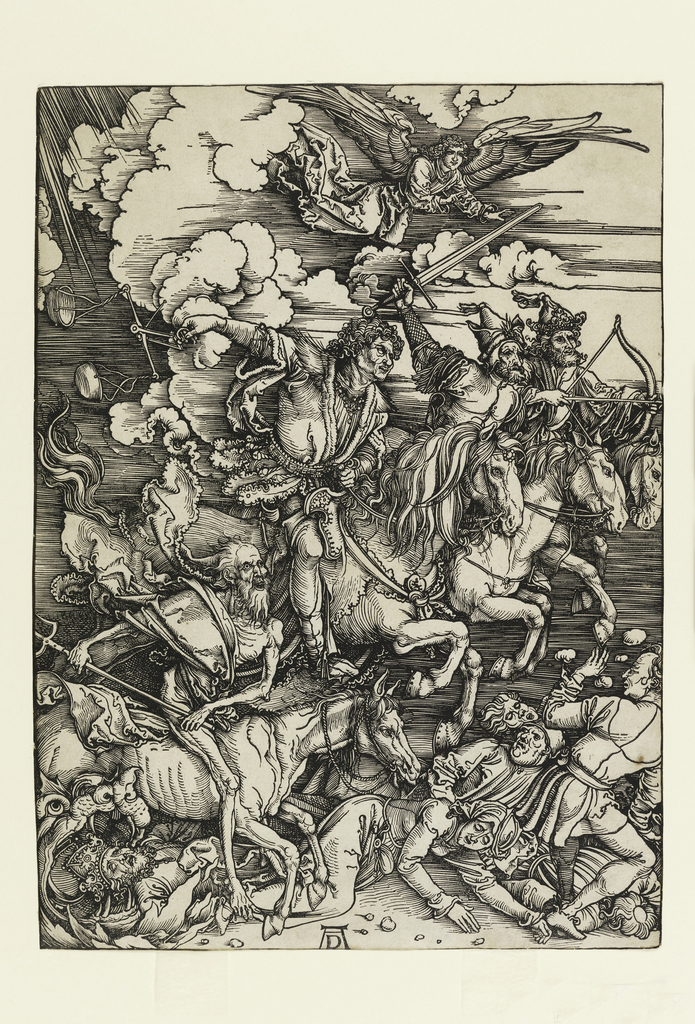 Albrecht Dürer (German, 1471-1528) is commonly regarded as one of the greatest artists of the Northern Renaissance. He trained under his father, a goldsmith, and later with Michel Wolgemut, a well-known printmaker and publisher. One of Dürer’s most prominent works is The Four Horseman of the Apocalypse dated ca. 1497-98, a woodcut print that depicts a scene from a passage of St. John’s Book of Revelation.

The passage mentions a book or scroll in God’s hand which is sealed with seven seals. The first four seals are then opened by the Lamb of God, releasing four beings. Three of these figures hold distinct weapons in their hands and each rides on a different colored horse (red, black, white, and “pale”). These men embody Pestilence, War, Famine, and Death, and it is understood that they are to bring forth a divine apocalypse on mankind as heralds of The Last Judgment.

Dürer brings this passage to life by instilling a sense of speed and danger through the use of strong horizontal lines contrasted by the diagonal motion in which the Horsemen are moving. The way in which he manipulates the lines makes the scene more graphic and vivid. Viewers are confronted with the violence of this tumultuous moment through the despair splayed across the faces of the men being trampled below. This is juxtaposed by the ferociousness of the eyes of the Horsemen.

Since this woodcut was printed in black ink, Dürer communicates the individuality of each Horseman through his weapon, as opposed to the color of each horse. He also conveys his virtuosic skill in the medium through these careful details. Woodcuts are a type of relief printing, meaning that a design is drawn directly onto the woodblock or transferred to the block from a drawing. The areas around the lines are then cut away so that the remaining parts can be inked and printed. This particular print measures a mere 15 x 10 inches; Dürer’s intricate design is also remarkably small in scale.

← A Strong Wallpaper Indeed
Buttons – An Expression of Curiosity →