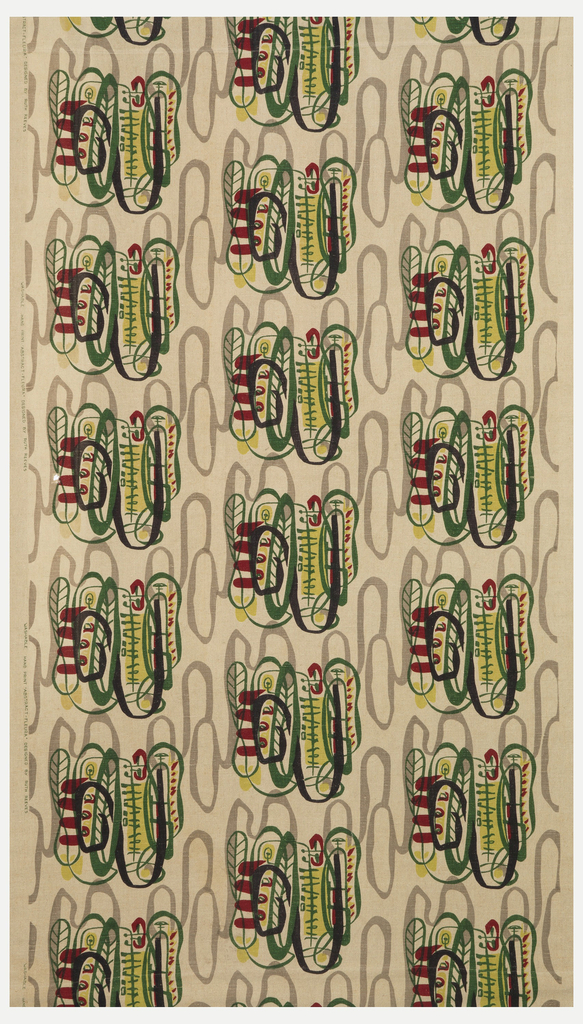 A pioneer of modern design, Ruth Reeves was at the forefront of American textiles throughout her career, perpetually interested in the discovery of a national American voice in design. After studying at Pratt and the San Francisco School of Design, Reeves traveled to Paris, where she lived between 1921 and 1927. In America, the field of textile design held little respect and virtually no official training, but Reeves, who was trained as a painter, created her own path, teaching herself and learning from the artists and textile designers she met in Paris. Reeves’ career truly began on her return to the United States, where she befriended Donald Deskey, Henry Varnum Poor and other innovative designers of her time. Together, she and several other designers opened the American Designers Gallery in 1928 in an attempt to create a definition for American modern design and offer Americans a coherent vision of a national style.

Reeves’ varied work included painting, advertising, and fashion and book illustration in addition to textile design, for which she is most well known. In 1932 she collaborated with Donald Deskey on the decoration of Radio City Music Hall, producing carpet designs throughout the building. Later in the same decade, Reeves was awarded research support from several important funders, including a Fulbright scholarship, a Guggenheim Fellowship, and award from the Carnegie Institute and the Ford Foundation, all of which she used to study abroad, where she researched and took inspiration from the native textiles and costumes of South and Central America, as well as India.

Her work with textiles in Guatemala and India inspired some of her most original hand-printed fabrics, and lead to important collaborations with Macys and other retailers. Her process for designing and creating these fabrics was inventive and unique, as she liked to experiment with innovative materials and often worked with chemists to augment the capabilities of the vat dyes she used for printing. Because of her training as a painter, Reeves often worked out her ideas for textiles designs in oil on canvas before abstracting and simplifying them for use in a patterned repeat. Abstract Fleura is a perfect example of her colorful designs — modern, refreshing, and original.

Emily Shapiro is a graduate of the Master’s program in the History of Decorative Arts and Design at Cooper Hewitt, Smithsonian Design Museum/Parsons The New School for Design. She worked at the Smithsonian Center for Education and Museum Studies for two years after graduating from Brown University in 2009, and is pursuing research in 20th century fashion and interiors.

← Rebajes: A Life Made of Copper
The Prodigal Son (of the Jazz Age) →