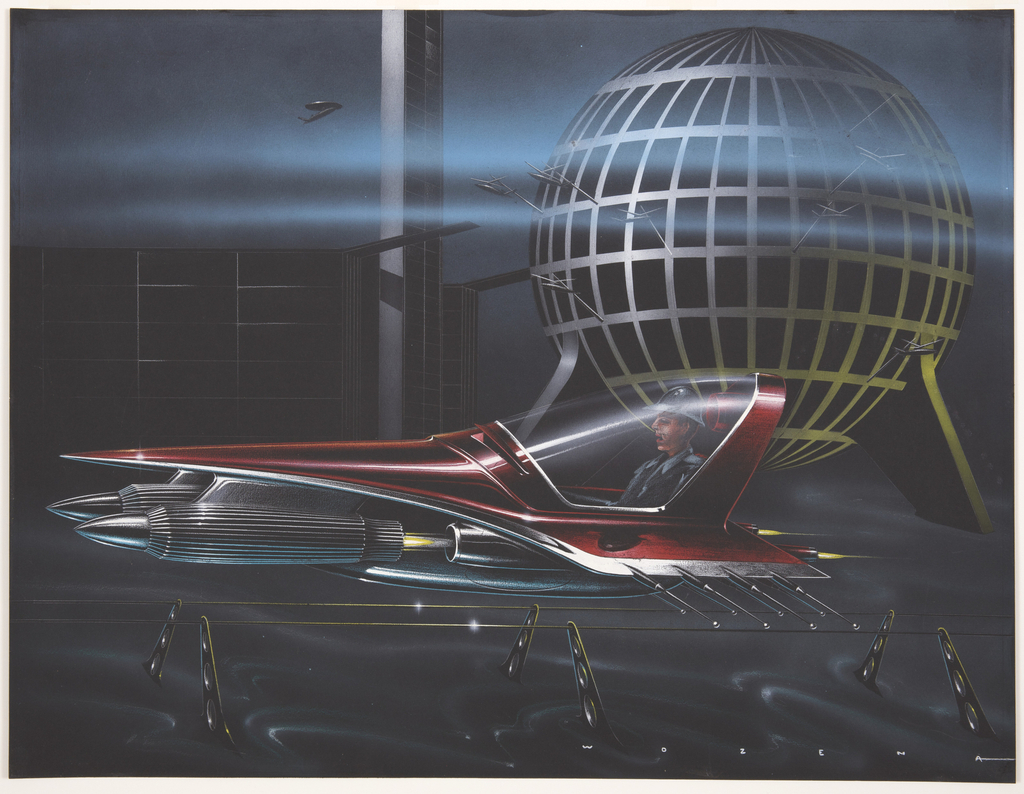 Cooper Hewitt’s Department of Drawings, Prints & Graphic Design celebrates the recent acquisition of a group of designs for automobiles, an important area of industrial design that had not previously been well represented in the museum’s holdings. The drawings document designs throughout the twentieth century, highlighting the history and prominence of innovation in the American automobile industry.

This concept drawing by General Motors designer Pete Wozena presents an elaborate automobile aircraft fantasy, a popular 1950s motif in designs for dream cars as well as production models. Dream cars were an important aspect of General Motors’ overall presentation—they often featured as showstoppers in the General Motors Motorama, an auto show staged by GM from 1949 to 1961 at the Waldorf Astoria in New York. Premier stylists at GM were recruited by Head Stylist Harley Earl to create these top-secret designs in the company’s Art and Color department, and dream car models excited audiences eagerly imagining advances in engineering. Earl described a good car as being a retreat or vacation, and aircraft-emulating automobiles were perhaps the perfect vehicles to foster fantasies of escape from the mundanity of everyday life. With jets streaming fire at the vehicle’s rear, this beautifully rendered concept car design also demonstrates GM’s potential to master still unknown technologies.

While Wozena outfits the driver of this vehicle in traditional attire, the futuristic landscape acts a surreal background. The globe-like grid forms and abstract architecture resemble the styling of the “roads of tomorrow” that characterized the futuristic highways in GM’s 1956 industrial musical Design for Dreaming, and it’s possible that Wozena’s drawing was connected with or influenced by the project. The swirling fog along the road likens the highway to a runway and suggests that the car might actually be traveling through the air.

← Painterly Effects
This Grain is Not For Your Table →

One thought on “Dream Car”

Wonderful! Thank you for sharing the 1956 GM Dream Car.