Snapshots of the American Teenager 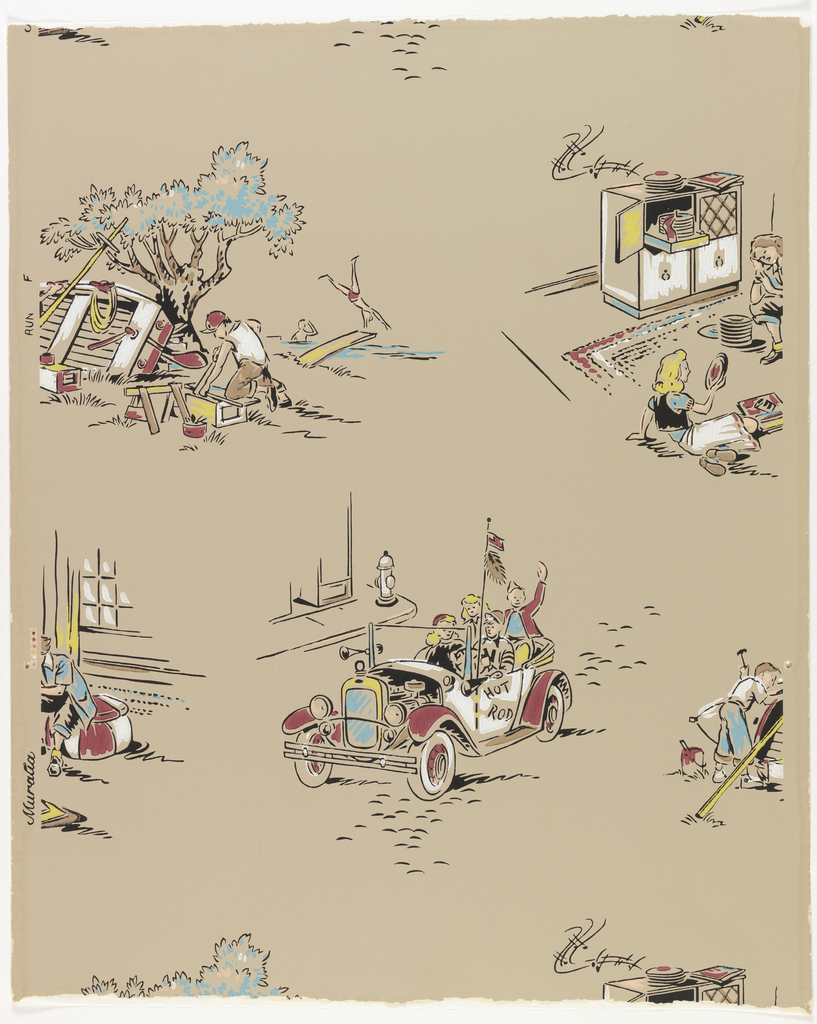 Can anyone today imagine a time when there was no such thing as the “teenager”? Surprisingly, it wasn’t that long ago that the “teenage years” were not considered a distinct stage of life. The words “teenage” and “teenager” were not invented until the 1920s, and it was only around this time that people noticed that individuals of the ages 13 to 19 were developing their own interests and identities. Many things happened to facilitate this development. First was the blossoming in the first half of the 20th-century of the high school. The high school provided an unprecedented space where young individuals could spend long periods of time outside the supervision of their parents and in the company of other people their age. Inevitably, a group identity began to develop along with shared interests distinct from those of people younger or older than them. This sidewall shows a group of teenagers in another invention that gave them unprecedented freedom from their parents, the car, here blazoned on the side with a new slang term, “hot rod.” The car let teenagers go where they wanted to, from the soda shop to the local swimming place. Another scene on this paper shows a group of teenage boys at a lake. Several of them are swimming, while two of them are shown repairing a fishing boat.

This highly active group of teenage boys is juxtaposed with a highly passive pair of teenage girls, shown sitting in their family den listening to records. This sidewall is a little early for us to assume they’re listening to that quintessential teen sound, rock ‘n’ roll. Rock ‘n’ roll’s ascendency would not come until the middle of the decade when the rise of the transistor radio allowed teenagers to develop their own listening habits separate from their parents. However, we can assume these teen girls were probably readers of magazines like Seventeen. First published in 1944, the magazine was the first aimed directly at teenage girls both in the content of its articles and ads. The 1940s and 50s saw the growing awareness on the part of advertisers as to the purchasing power of teenagers. By the 50s teenagers were the perfect consumers, full of disposable income from doing odd jobs, having plenty of influence on their parents’ spending habits, and having little memory of the austerity of the 1930s. This sidewall thus depicts a group of individuals who by this time had tremendous influence in the Postwar world of goods, an influence which arguably has never gone away since.

Nicholas Lopes is a student in the History of Design & Curatorial Studies graduate program at Cooper Hewitt, and is a Master’s Fellow in the Wallcoverings Department.