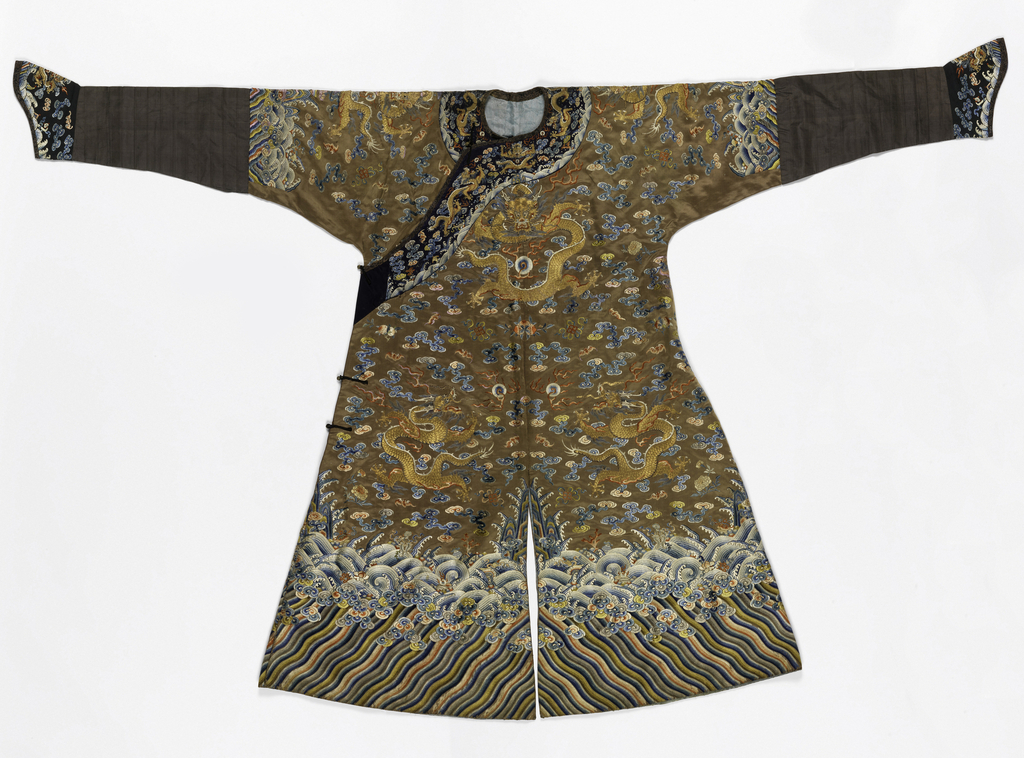 Dragon robes (ji fu吉服, lit. auspicious dress) originated in the Liao dynasty (907-1125), and were regulated as court dress under the Ming (1368-1644). The Qing dynasty (1644-1911) continued this usage, and standardized the nine-dragon design (the ninth dragon was positioned beneath the robe’s overlap). The dragon robe was worn with an ensemble of hat, surcoat, collar, belt, necklace and boots, and every element featured details to distinguish the rank, status, and gender of the wearer. Only the emperor and his consort could wear bright yellow (ming huang明黃) robes, and only the emperor could wear robes with four skirt slits (front, back, and the two sides). Robe slits were also used to indicate gender: women wore two side slits, and men slits at front and back.

This robe’s brown color and two front and back slits suggest that it belonged to an official during the Jiaqing 嘉慶period (r.1796-1820) of the Qing dynasty. Although five-clawed dragons were theoretically restricted to emperors and princes, they circulated more widely during the late Qing, and compared to a later dragon robe (1949-41-1) in the Museum’s collection, this example has shorter, more undulating stripes (representing waves), and the crashing waves and rocks atop the stripes appear more substantial.

← Art of Handwork
Snapshots of the American Teenager →

I’ve been getting your Object of the Day for several months. I sure wish you would add a feature so your readers could zoom in on an item. It seems to me that can’t be too difficult based on virtually every item in ebay having that feature.

As long as I’m at it, I would also like your articles to have more links to additional examples or additional history, etc. Some do and I always appreciate that.

I loved getting these in my in box every day.

Thank you for your note. If you go to the object page on Cooper Hewitt’s collection site you will find links to additional related objects. https://collection.cooperhewitt.org/objects/18433877/