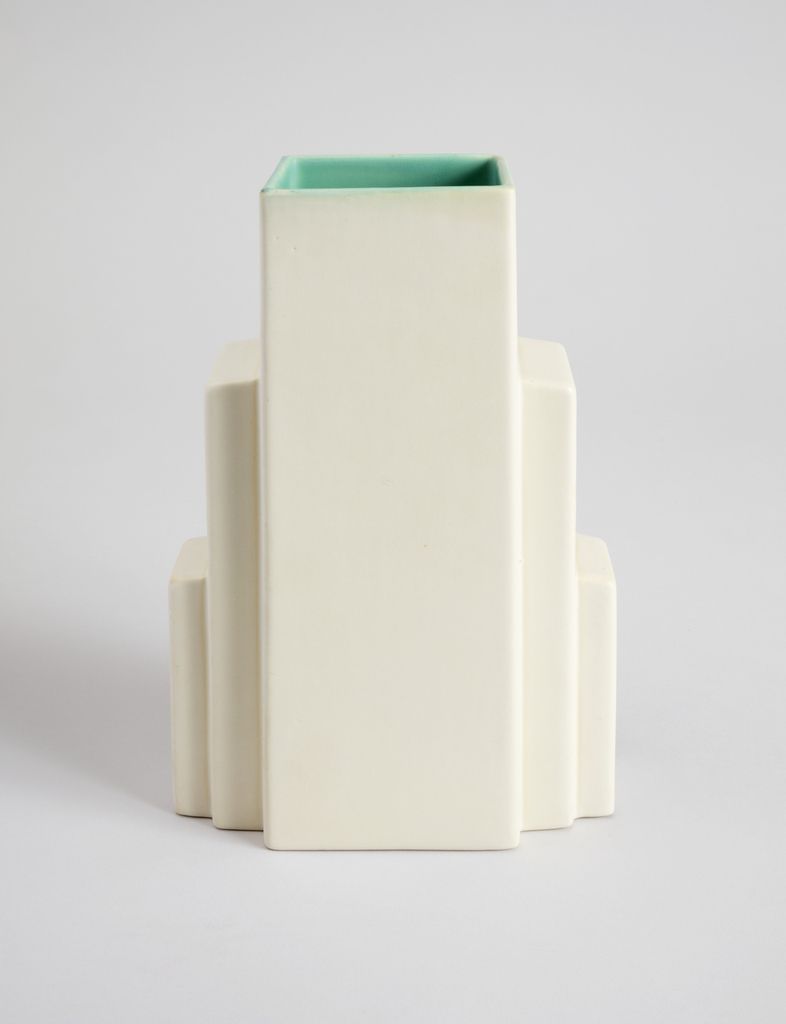 Even though the stamped marking on the underside of this vase reads “Coors Golden Colorado Pottery,” its coloring is not that of a pale ale. Rather, the exterior is painted with a cream-toned glaze, while its interior is coated in a light teal. This choice of matte glazing further calls attention to the stepped form of this vase, which is reminiscent of the Empire State Building.

In 1916, New York City passed a zoning code to combat the overbuilding of the city and to prevent large buildings from blocking air and light. This code, which was popularized by Hugh Ferris’s studies of massing which were published in a New York Times Magazine article of 1922, (one of the drawings is on view in The Jazz Age: American Style in the 1920s) featured setbacks in the upper levels in response to established limits in building massing to allow for greater height and more light. Little did the city planners behind this 1916 zoning resolution know that their law would lead to an entirely new design sensibility in America. Skyscrapers were the inspiration for every area of design during this period, and verticality and angularity were primarily emphasized. Designers like Paul T. Frankl created furniture that mimicked the sleek buildings of the New York City skyline that included his famed Skyscraper Bookcase Desk. When this vase was produced in the 1930s, the popularity of the “skyscraper style” had reached its zenith. Priced at less than $1.20, this vase allowed lower-market consumers to take part in a new and modern style.

After a strike in 1888, the glass workshop created by Adolph Coors to bottle his eponymous beer closed down. As a way to reuse the glass facilities, they were converted into factories to produce ceramics in 1910.Using the rich clay deposits native to the Colorado area, the facility was employed to create both dinnerware and heat-resistant china. With World War I beginning in 1914, trade embargos cut off access to German technical porcelain used in machinery, and business boomed for U.S. made chemical ceramics. The company was christened the Coors Porcelain Company in 1920, and producing ceramics is what allowed the Coors Beer Company to refocus their energies and stay open during the Prohibition. [1]

This Skyscraper Vase was donated by George R. Kravis II, who, along with many other objects at Cooper Hewitt, has inspired much about the exhibition, and provided, either as gifts or as promised gifts to Cooper Hewitt, 35 items on display in The Jazz Age: American Style in the 1920s exhibition.

This object is currently on display in The Jazz Age: American Style in the 1920s.

← Afternoon at the Museum
“It screeched, it bellowed… Raucous? Yes. Crude? Undoubtedly.” →

Have you seen the Camark version that was made in Camden, Arkansas that could possibly predate the Coors version? Camark started in 1927 and had a Modernistic/Futuristic line from the same year.