Dining Under the Stars 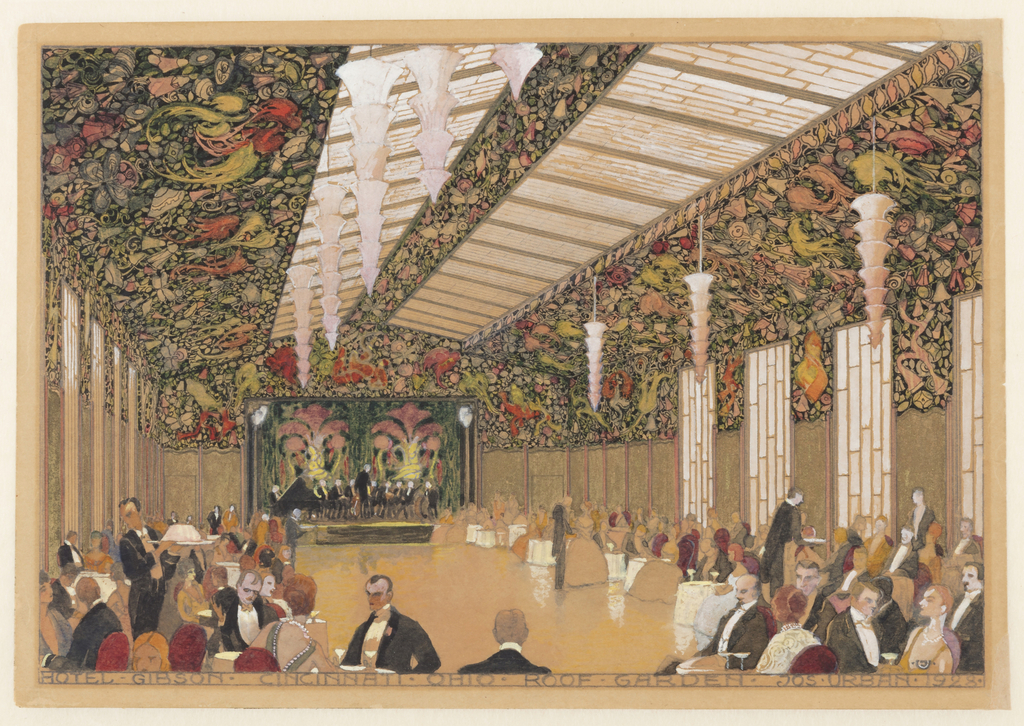 Joseph Urban’s design for the Roof Garden at the Hotel Gibson in Cincinnati, Ohio, reflects turn-of-the-century summer dining at its finest. Late-nineteenth century American roof gardens were inspired by European pleasure gardens, often devoted to entertainment.  New York producer, composer, and entrepreneur Rudolph Aronson is credited with not only bringing the roof garden to the United States, but also making it a place for entertainment as well as for food and drink.

Restaurants that provided such services and distractions were already well established in American metropolises. Business boomed for the majority of the year until summer, when the insufferable summer heat curtailed customer interest. Before air conditioning, concert halls closed for the summer to ride out heat waves.  The introduction of the roof garden soon allowed for summer entertainment and dining with the comforts of fresh air–summer in the city was no longer a concern. The roof garden also provided an escape within a city’s confines. While a new view from the garden atop a city building served as a point of interest for tourists, roof garden decorations permitted permanent residents to imagine that they too were on vacation–many roof gardens were decorated with real flowers and live birds, creating an exotic atmosphere at an easily accessible location.

Roof gardens hit their peak popularity in the early 1890s.  However, the public interest in roof gardens made them over-populated, and ironically, overheated–by the late 1890s the gardens had already begun to fall out of favor. Owners of these spaces, therefore, had to constantly invent new ways to keep people interested and coming back to their establishments during the summer months.This search for novelty is seen in the roof garden at the Hotel Gibson. Within a year of becoming manager of the hotel in 1927, Ralph Hitz spent over $300,000 in improvements, $150,000 of which went to the remodeling and redecoration of the roof garden.  Reopened in May 25, 1928, the hotel publicized the roof garden as cool and colorful, which in fact, it was. The newly installed ventilation system provided for a maximum temperature of 78⁰F in the height of summer. This was guaranteed by a process called “manufactured weather,” which could use up to ninety tons of ice in one day in order to maintain the desired temperature.

In addition to its cool temperature, this roof garden had the added caché of being designed by a premier, international designer: Joseph Urban. Urban, an Austrian-born architect, who had been working in the United States from 1904 , had already served as the main designer for Ziegfield’s Follies and the Metropolitan Opera. His design for the roof garden at the Hotel Gibson promised excitement.

Urban delivered a stimulating roof garden through his characteristic use of color and light. The windows and glass skylight of the Hotel Gibson were covered with Japanese silk, which created a soft radiance. Additional lighting effects were achieved with the help of a dimmer control in red, blue, and amber which, along with the indirect reflection from the silken panels in the walls and ceilings, created an overall kaleidoscopic affect. Urban also opted to replace real plants with colorful plant-inspired murals, which swept across the walls and served as a vibrant backdrop to performing musicians. With this alteration, guests were able to feel as though they had escaped the city, while the open space on the floor no doubt also allowed air flow and an ultimately cooler garden.  Although the design for the Hotel Gibson roof garden was almost directly taken from Urban’s previous 1927 design for the St. Regis Roof Garden in New York and the Book-Cadillac Hotel in Detroit, the roof garden would have been unique in Cincinnati, bringing some New York pizzazz to the Midwest.

Alison Charney is a former MA fellow in the Drawings, Prints & Graphic Design Department. This post was originally published on May 26, 2013.

One thought on “Dining Under the Stars”

This is fabulous! Even more excited now to visit the Jazz Age exhibit!!