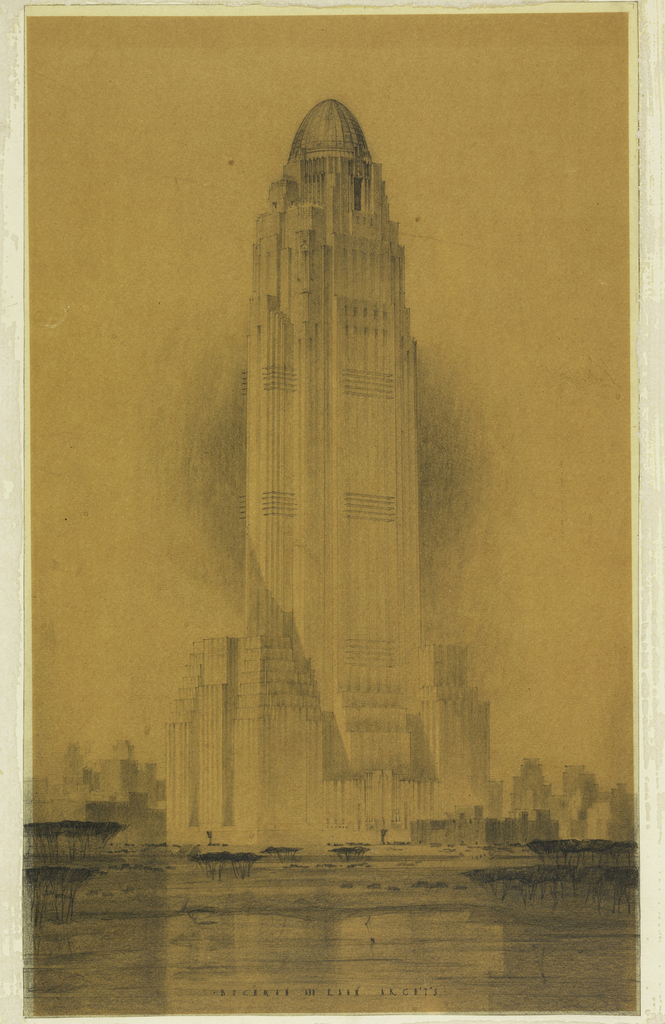 Ely Jacques Kahn (1884-1972), a commercial architect active throughout the 1920s and 30s, worked to define the New York aesthetic through his Art Deco skyscrapers. “The industrial structure,” he once commented, “sails merrily into experiment.” Kahn’s observation exemplified the architect’s dual pragmatism and creativity, his ability to meld a practical understanding of the architectural program with innovative form and decoration. Unlike his Beaux-Arts peers, Kahn recognized the inherently commercial nature of New York City and regarded the commercial structure as an opportune venue for architectural invention. Commissioned by large real-estate firms, as well as luxury stores such as Bergdorf-Goodman, Kahn’s architecture definitively altered the New York landscape.

Kahn’s “Design for a Skyscraper,” drawn while in partnership with Albert Buchman, offers a perspective view for a high rise tower. Kahn arranges squat masses around a vertical shaft, which tapers off into a domed peak. Kahn emphasizes the tower’s height with a series of emphatic, vertical lines. The tapering masses, terminating in the curved peak, further emphasize the structure’s height, leading the eye from the massive foundation upwards. Kahn’s work, as exemplified by this drawing, came to be defined by clean, blocky, geometric masses, as well as a rich polychromatic palette. Kahn was influenced by non-Western sources, including Moorish and Persian design. Many of his structures, including Cooper Hewitt’s drawing, recall ancient ziggurats with their stepped facades. This proposed skyscraper, though never realized, is notable for its domed peak, a feature that departed from the strictly rectilinear profile of Kahn’s work.

The 1916 zoning code, which set limits for structural masses at certain heights, was enacted to restrict skyscrapers from blocking light and air throughout the city. The new zoning law obliged architects such as Kahn to stack masses as a building grew taller. Kahn took ownership of this stacked profile, integrating it into his design aesthetic. Kahn’s graphite rendering, with its atmospheric shadowing and its isolated form, further demonstrates the power of the architectural drawing as an advertising tool, an alluring image that suggests the futuristic and other-worldly quality of Kahn’s proposed design.

This post was written by Willa Granger, a former MA Fellow at Cooper Hewitt, Smithsonian Design Museum. This blog post was originally published on July 13, 2013.

← Perfect Timing
Dining Under the Stars →