Slip on a Delphos 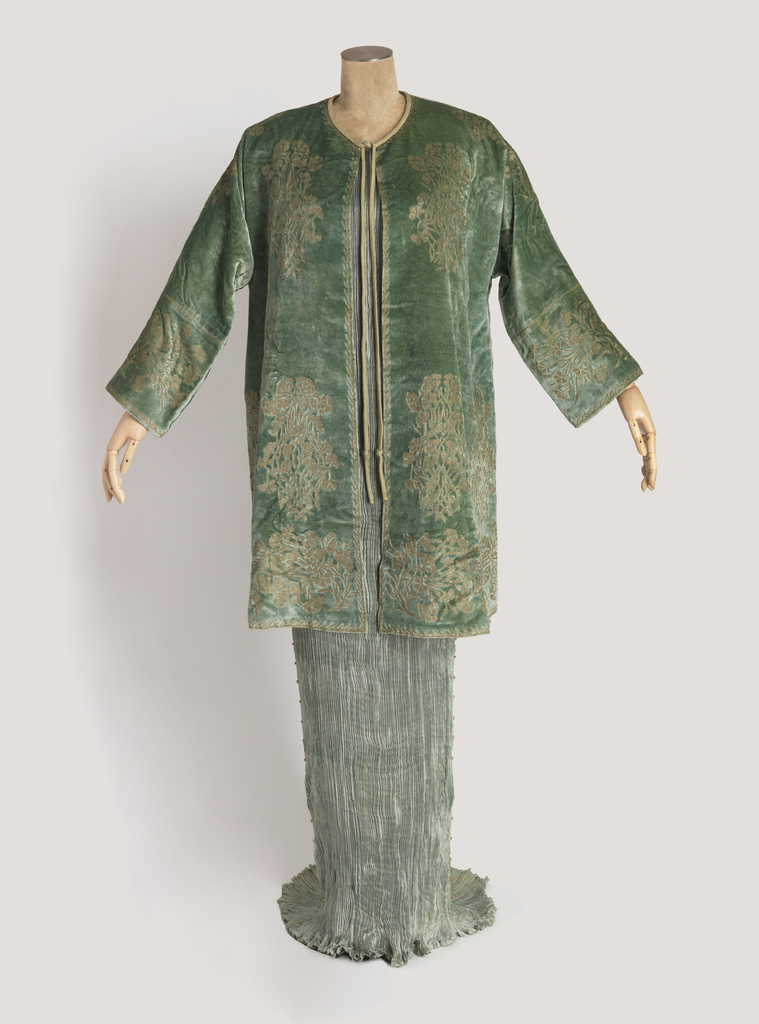 Spanish-born, Venice-based designer Mariano Fortuny was a 20th-century Renaissance man—a painter, printmaker and photographer, he also designed theatrical sets and costumes and invented lighting systems for theater. But he is best known for his iconic Delphos dress, which was introduced around 1907 and was produced with only minor variation until his death in 1949. He patented the pleating process in 1909, along with some of his dyeing and printing processes, but left out just enough information that the process has never been fully understood. Traditionally pleats are made by adhering fabric to pre-scored cardboard forms, but Fortuny’s irregular pleats must have been hand-made, and were given further dimension by rolling the vertically pleated fabric through a series of horizontal heated copper rods to give an undulating effect. His natural dyeing processes and use of stenciled metallic pigments and discharge agents to replicate the look of ancient Persian, Islamic and Renaissance woven fabrics (which he collected) are also much admired for their depth and richness.

This particular example is in its original box, which has both the name of the buyer, Mrs. J.H. Lorentzen of Pasadena California, and the seller, Elsie McNeil. This provides a key into the importance of the American market in Fortuny’s success. The first photograph of a Delphos dress is by Alfred Steiglitz—a portrait of his sister taken in 1907. By 1912, Fortuny’s gowns were being sold in New York. Because they hug the body and were designed to be worn without a corset, in Europe the Delphos was considered a tea gown—suitable only for at-home entertaining. But American actresses and dancers like Lillian Gish and Isadora Duncan wore them in public as evening gowns. In 1927 Elsie McNeil, an American interior designer, became so enamored of Fortuny’s fabrics that she went to Italy and persuaded him to give her the exclusive rights to sell his products in the US. She became his close friend, protégé, and guardian angel—she helped him through some very difficult financial times in the 1930s and after WWII, and purchased the company after his death.

See this object in The Jazz Age: American Style in the 1920s at Cooper Hewitt, Smithsonian Design Museum from April 7 – August 20, 2017.