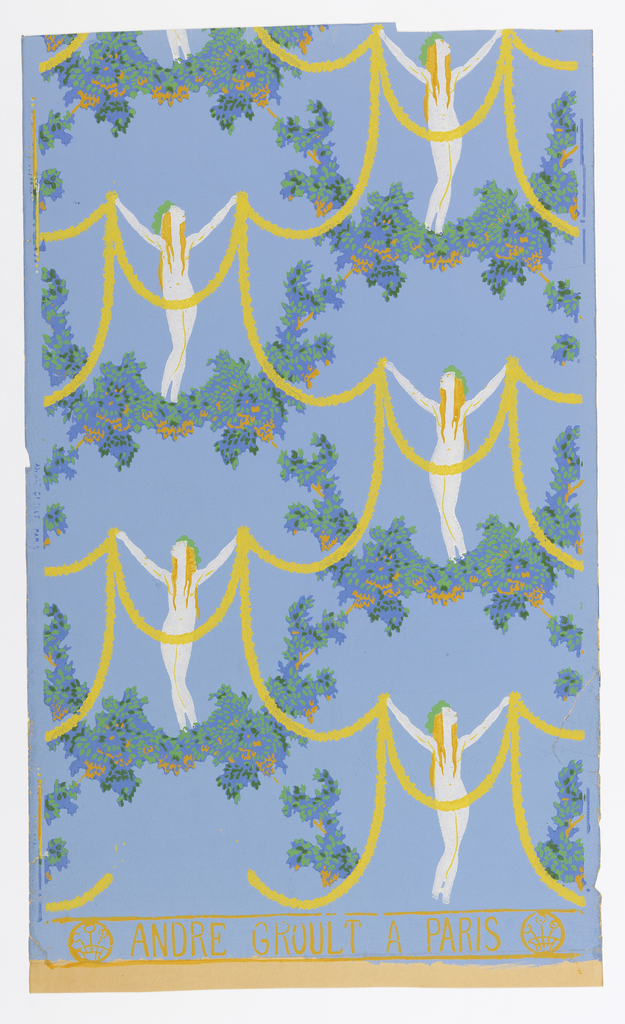 André Groult was a well-known French Art Deco designer. His most famous work was the woman’s bedchamber he exhibited at the 1925 Exposition des Arts Décoratifs et Industrials Modernes in Paris. Featuring walls covered in pink silk and curvaceous furniture covered in expensive shark skin, the room was a perfect example of how French Art Deco design often referred to historical French styles. Groult’s bedroom used elements reminiscent of Rococo and Louis Philippe styles. Other Art Deco designers, like Émile-Jacques Ruhlmann, André Mare, and Louis Süe, would also draw from Baroque Louis XIV style and late 18th-century neoclassicism. This sidewall is an excellent example of this historicist tendency in Art Deco design. Its historical references include the classical nudes and the garlands and overall layout reminiscent of late 18th-century arabesque papers.

The desire among French designers to incorporate historical elements into what was supposed to be a “modern” style was due in part to the strong nationalist sentiment felt in France throughout the early 20th century. In design this nationalism manifested itself in a desire to create a true “French” style that was both modern and yet clearly evoked France’s glorious artistic past. As a result, any style that existed between the mid-17th and the mid-19th century, when France was the supreme cultural center of Europe, was considered a worthy reference for designers working in the new style moderne.

Groult’s fame largely rests on his furniture and interiors, but he was nevertheless a prolific wallpaper designer. Early in his career, he exhibited several of his papers at the 1911 Salon d’Automne. By the late 20s, he had a company to produce papers designed by himself and others like Jean-Émile Labourer and Marie Laurencin. Groult’s workshop was probably inspired by the Atelier Martine founded by Paul Poiret which produced fabrics as well as wallpapers. Groult had married Paul’s sister Nicole, herself a fashion designer, in 1907, so the relationship between the great couturier and Groult must have been close. Like Poiret’s dresses, Groult’s work epitomizes the beautiful luxuriousness and inventive pattern-making of French Art Deco design.

This wallpaper will be on view in The Jazz Age: American Style in the 1920s, at Cooper Hewitt, Smithsonian Design Museum through August 20, 2017.