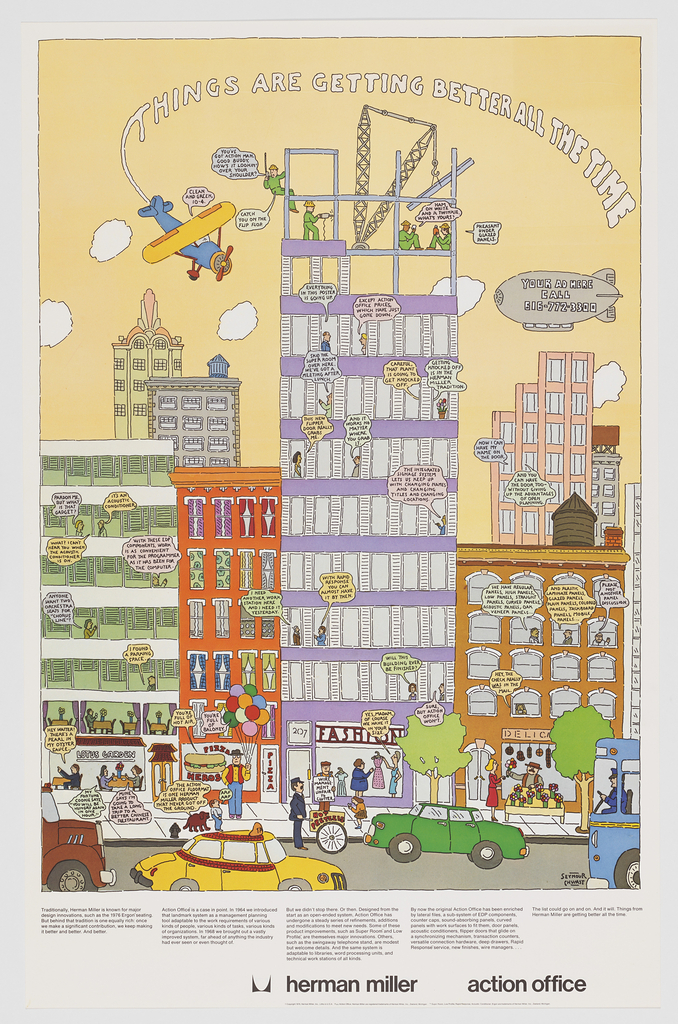 This poster designed by Seymour Chwast for Herman Miller Furniture Company is all about the details. Chwast skillfully packed a bustling city scene overflowing with conversation into the poster’s vertical format, requiring the viewer to look closely and engage with the design’s dialogue as though reading a comic or storybook animated by the designer’s careful attention to gesture and form. The scale of Chwast’s design presents an interesting departure from the furniture company’s iconic graphics. Art director Stephen Frykholm, Herman Miller’s first in-house graphic designer, often approached detail as the essential element of a composition, creating a zoomed-in point of view that abstracted forms into geometric lines rendered in super-saturated hues. Though Frykholm worked with consultant Ralph Caplan to develop the design scheme and text for the advertisement, he proposed commissioning a celebrated graphic designer to illustrate and sign the poster, allowing it to function as both an advertisement as well as a gift for special Herman Miller customers.[1] Frykholm chose Seymour Chwast, one of the country’s leading graphic designers and, together with Milton Glaser, one of the co-founders of Push Pin Studios. The resulting poster celebrates both Herman Miller and Chwast and demonstrates an important choice to ally the furniture company with another design icon.

The occasion for the poster was a new version of Herman Miller’s workstation product Action Office. Since the company was introducing an improved product rather than a new one, Caplan was inspired by the 1967 Beatles song “Getting Better” to create a city scene in which the figures remark on ways in which their worlds are improving.[2] The verticality of the design features a building under construction at center, deliberately signaling progress, and the abundance of high-rise windows allows many of the conversations to enter the scene from unseen office interiors, no doubt outfitted in Herman Miller’s Action Office. Many of the dialogues in the design are direct advertisements—one man in the center building says, “Everything in this poster is going up,” to which his female colleague replies, “Except Action Office prices, which have just gone down.” Others are more clearly corporate in-jokes, such as a dialogue between two unseen figures, one of whom remarks, “Careful, this plant is going to get knocked off.” to which the other replies, “Getting knocked off is in the Herman Miller tradition.” Still other exchanges are more comedic—a dog on the sidewalk shares a funny and thoughtful statement about Herman Miller, while the boy walking beside him barks. It is perhaps this comic tendency which made Chwast such a good fit for the poster’s execution—while the words alone are amusing, Chwast’s attention to gesture and line animate the scene. Without showing office interiors or even many of the figures whose conversations fill the composition, Chwast creates a rich and compelling image that continues to amuse. Though Herman Miller presented a straightforward concept to Chwast without much need for further development, the presence of Chwast’s hand and style clearly distinguish the work as his own.

← When a Tile is Not a Tile
Samoan Bark Cloth →