It goes to your head 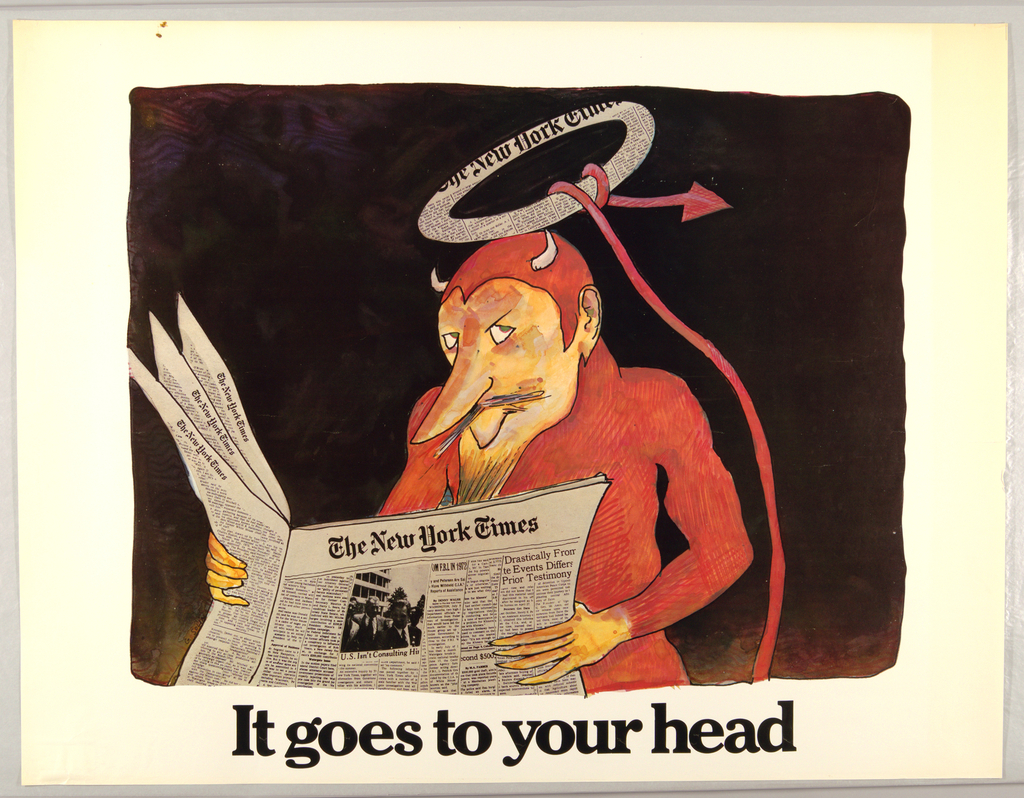 In Budapest, Hungary 1935, Andrew Kner was born into a family whose history in design, bookbinding and publishing dated back to the 18th century. In 1940, the Kner family fled the Nazi regime in Hungary and landed in Chicago, Illinois. Kner displayed an early interest in graphic design and matriculated at Yale University, where he received his bachelor’s and master’s degrees in Fine Arts. After graduation, Kner started creating promotional designs for publications like Esquire, Time, and New York Times Sunday Book Review. Kner began freelancing for Print magazine as an art director in 1962 and contributed to the publication for more than thirty-five years. In 1970, Kner became the executive art director for the New York Times  Promotion Department, a position he held until 1984.

The Cooper Hewitt possesses several designs by Kner in its collection.  This playful poster was created in 1972 during Kner’s tenure at the Times. The image shows a red horned devil with an open edition of the New York Times in his hands. Although the fine print of the articles is unintelligible, the newspaper’s graphic logo is distinctly defined on each page. A halo composed of a cut-out Times headline hovers above the figure’s head, while his red tail wraps around it. Along the border of the poster is a brief slogan that reads, “It goes to your head,” signifying the didactic possibilities the newspaper affords its readers. Notwithstanding the unfolded paper in his hands, the devil is glaring at the halo above in a cursory moment of irritation. Kner’s tongue-in-cheek juxtaposition of the devil, the allegorical antithesis to truth, and the veracious reports in the paper, recalls the extensive history of satirical cartoons. The association is further emphasized by the image’s expressive and spontaneous lines and form. Like many of Kner’s promotional designs for the New York Times, this poster was likely displayed in the New York City subway stations for passersby to consider and chuckle at.