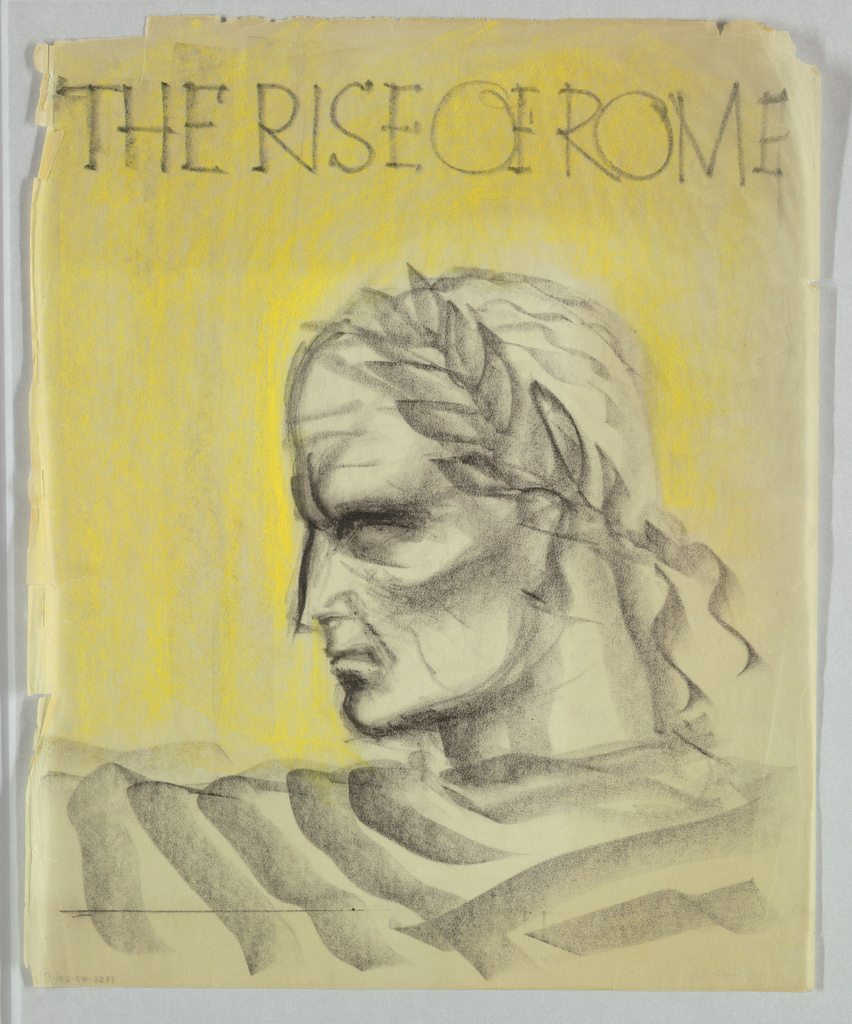 Contemporary critics generally considered Gustav Jensen’s stylish illustrations and overall design for “The Rise of Rome” to be the highlight of the 1932 publication. The book, a simplified history of Rome’s transition from Republic to the Imperial rule of the Caesars, was written for a high-school audience by Gordon Congdon King.  Reviews frequently complimented Jensen’s contributions, noting the pleasing “aesthetic experimentation” in format, typography and binding.[1]

The text focused on the “outstanding personalities who helped shape the destinies of the people”[2] and was supplemented by a series of remarkable portraits of notable characters, from Augustus Caesar, Scipio, and Virgil, to Cleopatra, all executed by Jensen. Praised by critic and author Nora Buest for their ability to distill “that essence of personality, which is almost independent of time and space,”[3] Jensen’s depictions are striking in their distinct individuality, often achieved with just a few well-placed strokes. His skill is particularly evident in a graphite sketch for the heads of seven Roman figures, including Emperors Trajan, Claudius, and Nero, and a compelling portrait of the Stoic philosopher Seneca. Jensen utilizes the lettering of each name to further distinguish personalities: the looping script of ‘Caligula’ presents a stark contrast to the angular lines of ‘Vitellius.’

This group of drawings, donated to Cooper Hewitt by Jensen’s wife after his death, provides a rare insight into the early graphic style of a man who is better known today as an Industrial Designer. Born in Copenhagen in 1898, Jensen left Denmark for America in 1919, joining a post-WWI wave of émigré European designers that included Paul Frankl, Ilonka Karasz, William Lescaze and Raymond Loewy. Despite a lack of formal training,[4] Jensen was successfully working as a designer less than ten years after his arrival in New York, participating in a 1928 competition, hosted by the Art Alliance of America, to design a glass perfume bottle to rival the work of French master René Jules Lalique. Jensen, competing against Walter Dorwin Teague, William Zorach and Edward Steichen, won the second place prize of $250.[5]

The breadth and variety of Jensen’s innovative design work have earned him a position among the pantheon of early Industrial Designers. Responding to booming domestic consumerism in the 1930s, he designed everything from telephones for American Telegraph & Telephone (AT&T) and Bell Telephone to a metal sink for the International Nickel Co., as well as advertisements, typefaces, book jackets, and packaging. Jensen even designed an innovative concept radio cabinet, a photograph of which is currently on display in Cooper Hewitt’s exhibition The World of Radio, on view through September 24, 2017. Widely praised throughout the Mid-20th century, he won several awards and distinctions for his work as well as the commission to design the Danish Pavilion at the 1939 World’s Fair in New York. George Nelson, discussing pioneers in the field of Industrial Design in his (initially anonymous) landmark article, published in Fortune magazine in February 1934, singled out Jensen from a group that included Loewy, Teague and Henry Dreyfuss as “the top man from a purely aesthetic point of view.”[6]

Ria Murray is a graduate student in the History of Design and Curatorial Studies program offered jointly by Parsons School of Design and Cooper Hewitt, Smithsonian Design Museum. She is a Fellow in the museum’s Drawings, Prints & Graphic Design Department.