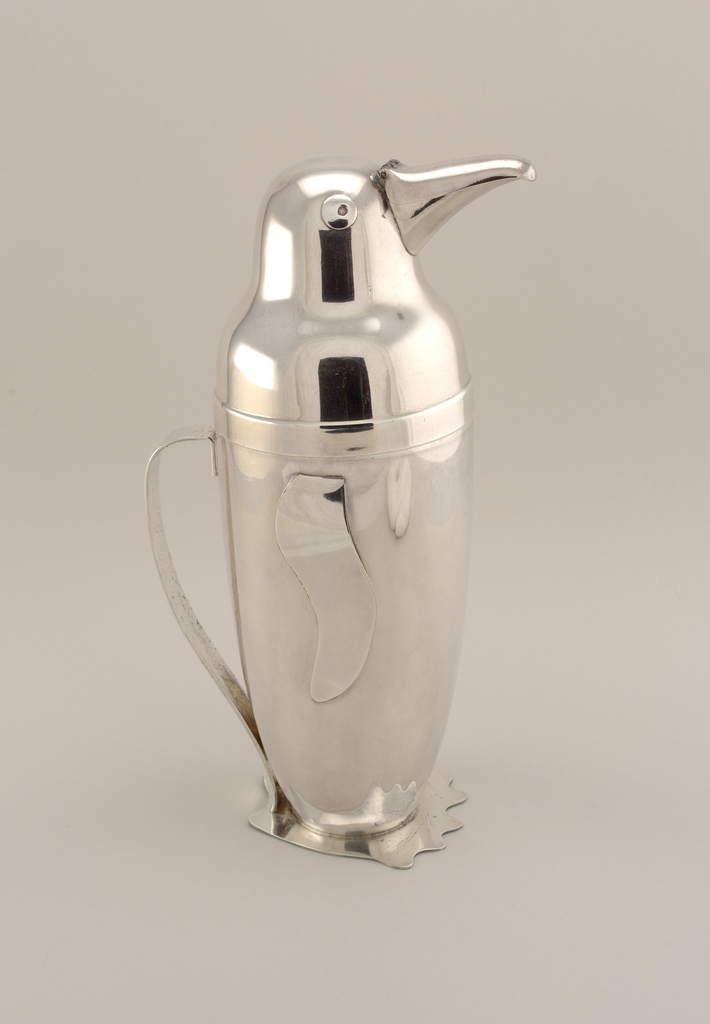 Posted by Catherine Acosta on February 23, 2017

In a scene from the 1934 film, The Thin Man, retired detective Nick Charles (William Powell) demonstrates to a group of bartenders the skills needed to shake a good cocktail. While vehemently shaking a cocktail shaker with one hand, he says to them, “See, the important thing is the rhythm, always have rhythm in your shaking.” He is wearing a dark suit and is at the Ritz Hotel in San Francisco. This scene, among others in the film, associates alcohol consumption with luxury and leisure. Nick Charles knows his bars, both public and private, and is often shown with a glass in hand. The shaken-cocktail flourished in America following Prohibition’s repeal in 1933. Concurrently, it became associated with a more modern and informal lifestyle.

A humorous design, this penguin-shaped cocktail shaker was manufactured in 1936, two years after the release of The Thin Man, and captures two other traits of 1930s cocktail culture: novelty and pleasure. Standing a little over a foot tall, one can easily imagine this silver-plated shaker glistening with moisture from the cold beverage inside of it. In fact, the shaker’s purpose draws upon the penguin’s literal associations to both ice and cold, giving it a tongue-in-cheek quality. In the 1930s the Napier Company began to focus on its giftware line, which included barware. In the December 1936 issue of Vogue, their feature “Vogue’s 100 Gifts,” mentions a glass liquor set, ashtray, and a bartowel specifically designed for a cocktail shaker, as potential holiday gifts. Amusingly, the caption for the bartowel is “Help your friends pass their bar exams with this imported linen bartowel with its escape proof pocket for the cocktail shaker.”[1] Napier was right on the mark for creating barware for gift-giving.

Currently at the Dallas Museum of Art is Shaken, Stirred, Styled: The Art of the Cocktail, an exhibition featuring 60 objects from DMA’s collection that connects the history of the cocktail to today’s cocktail culture. With the reemergence of the cocktail in recent years, via “mixology” and “craft cocktails,” this cocktail shaker reminds us of America’s historic—and sometimes complicated—relationship with alcohol consumption.

← This Museum is Gorges
Scrollwork and Squirrels →