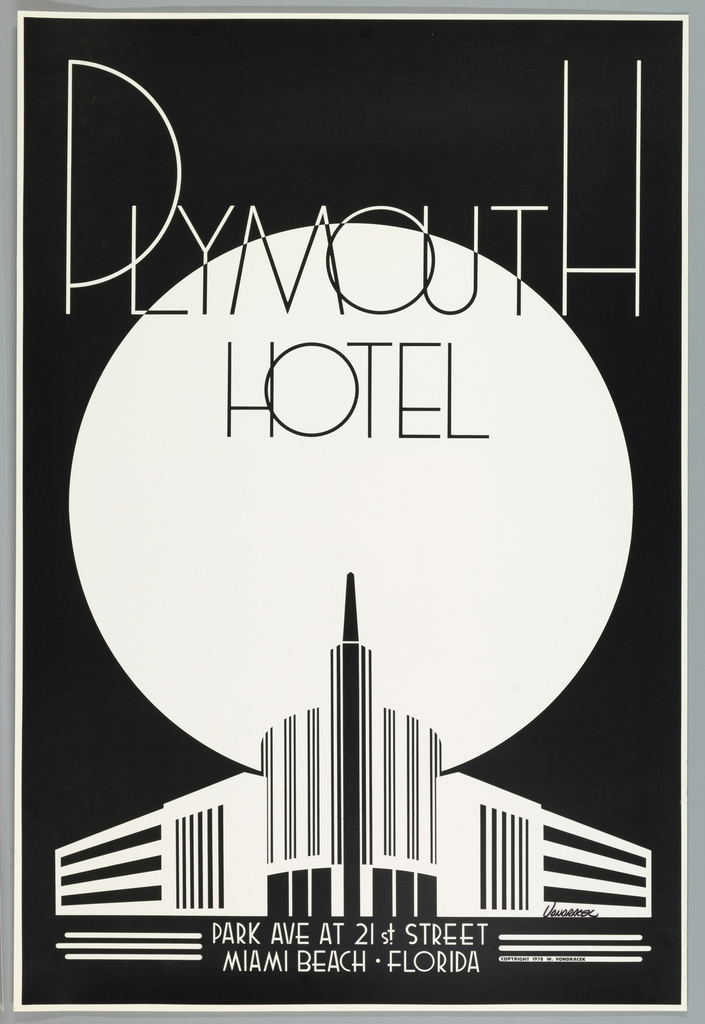 In 1977 Miami’s South Beach lay in ruins: unkempt and forgotten by time. In less than 50 years, the district had gone from a lively and glamorous area to one that was run down and boarded up. With preservation in mind, a Miami Beach resident and mechanic by the name of Woody Vondracek set out to showcase South Beach’s aging landmarks through monumentalizing posters, without any formal training in art. [1]

Vondracek used the famed Plymouth Hotel as his first example. Completed in 1940, the Plymouth Hotel is nestled in the Collins Park neighborhood and was designed by Anton Skislewicz.[2] The hotel hosted many important historical moments, housing GIs during World War II and serving as a residence for members of the New World Symphony in the 1980s and 1990s.

Vondracek pays homage to the building’s geometric Art Deco architecture by using a black and white pallet with bold lines bringing the corner façade of the hotel front and center. A larger-than-life moon rises above the hotel centering the image and evincing a pleasant symmetry that focuses the viewer’s attention on the stacked words “Plymouth Hotel.” The only other text on the poster is the address of the hotel but curiously enough, the Plymouth was already long shuttered by the time Vondracek designed the poster. By including the address, Vondracek reminds residents of where the hotel is located and draws attention to its beautiful architecture. The Art Deco style of the poster’s graphics reflects the location’s history as an epicenter of leisure and style.

In an effort to honor the United States Bicentennial in 1976, the Miami Design Preservation League was formed in hopes of establishing a historic art deco district in Miami Beach.[3] Richard Oliver, curator of Architecture and Design at the Cooper Hewitt, wrote to Florida Governor Ruben Askew in 1977 that Miami had some of the best art deco architecture in the United States which was “clearly of great importance in the cultural history of Florida.”[4] That same year, the League held a gala that included a candlelight walk through the district which ended, memorably, in front of the Plymouth Hotel.[5]

The respect that architects and designers like Vondracek showed to Miami Beach’s Art Deco district paid off and it helped to, establish the neighborhood on the Register of Historic Places.[6] This district became the first to achieve historic preservation status despite its comparatively recent history. [7] Woody Vondracek went on to make several other posters for the preservation and promotion of Miami Beach’s Art Deco District.

[1] The Deco Artist, “It was 1977 and he found treasures in the sand,” The Official Website of Woody Vondracek, http://www.thedecoartist.com/index.html(accessed November 25, 2016).

One thought on “Posters for Preservation”

I have a original Art Deco poster by Woody Vondracek, It is 24″ X 30″ matted and framed. It reflects in center two palm trees surrounded by yellowish moons and what looks like three large Bow Ties. Hand written on the back of the frame Original Painting by Woody Vondracek. Can you advise me of the value of this poster.