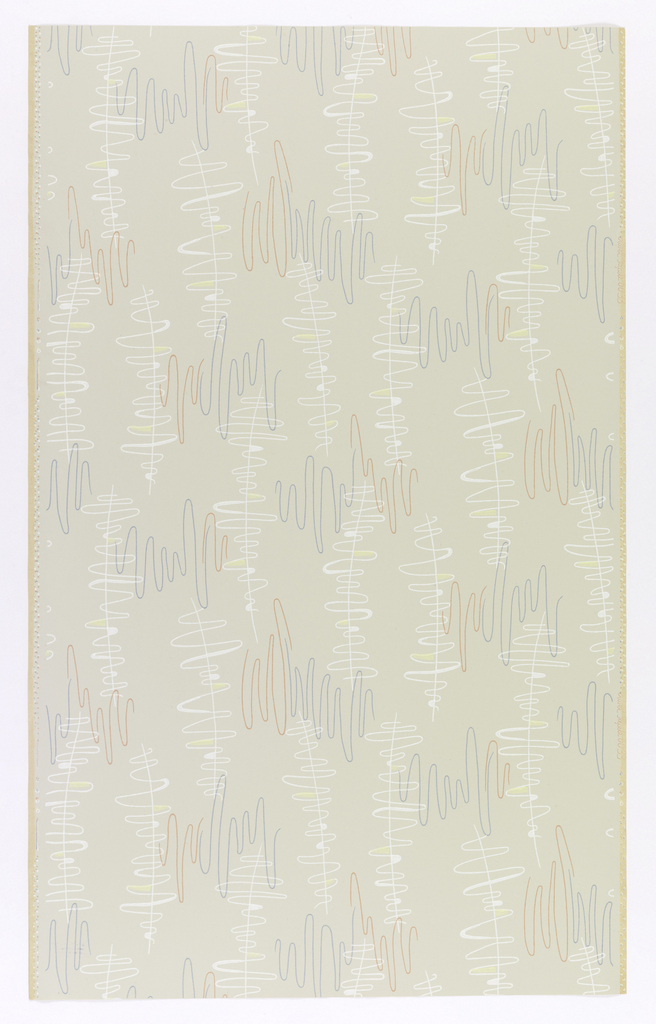 The Cooper Hewitt has over 50 wallpapers by the little-known German company Hosel Tapeten. Centered in the town of Hosel, situated partway between Düsseldorf and Essen in the northwest of the country, the company’s output was very typical of post-World War II German papers. The period saw an increase in the amount of cheap, mass-produced papers perfectly suited as decoration in the postwar housing boom. Almost always muted in their color schemes, they reflect the German tradition of having most of a room’s interior covered in pretty but unobtrusive papers. In most homes, any bright or eye-catching papers were kept to one wall meant to serve as a focal point.

The design on this paper is highly abstract. Its red, white, and blue squiggles remind one of radio waves or the gestural Abstract Expressionist movement making waves in the United States. This association is not accidental. These types of abstract designs were intentionally meant to evoke the avant-garde appeal of modern art, and of course, modern art was at this time synonymous with the New York art world. The use of the American open plan in new housing meant that this international influence extended to the very rooms these papers were installed in. However, to find designers for these “contemporary” papers, as they were called, German manufacturers often looked locally. Patterns like these were frequently designed by students from nearby art schools. For example Marburg used designs created at the Werkakademie Kassel, and Pickhardt & Siebert employed students from the Folkwangschule in Essen. Contemporary papers were embraced in Germany, or at least in West Germany, on a level not seen in other areas of Europe, where they competed with a revival of prewar floral patterns. Their avant-garde designs demonstrated how the wallpaper industry looked artistically to the future as a way to redefine itself in the first decades following World War II.