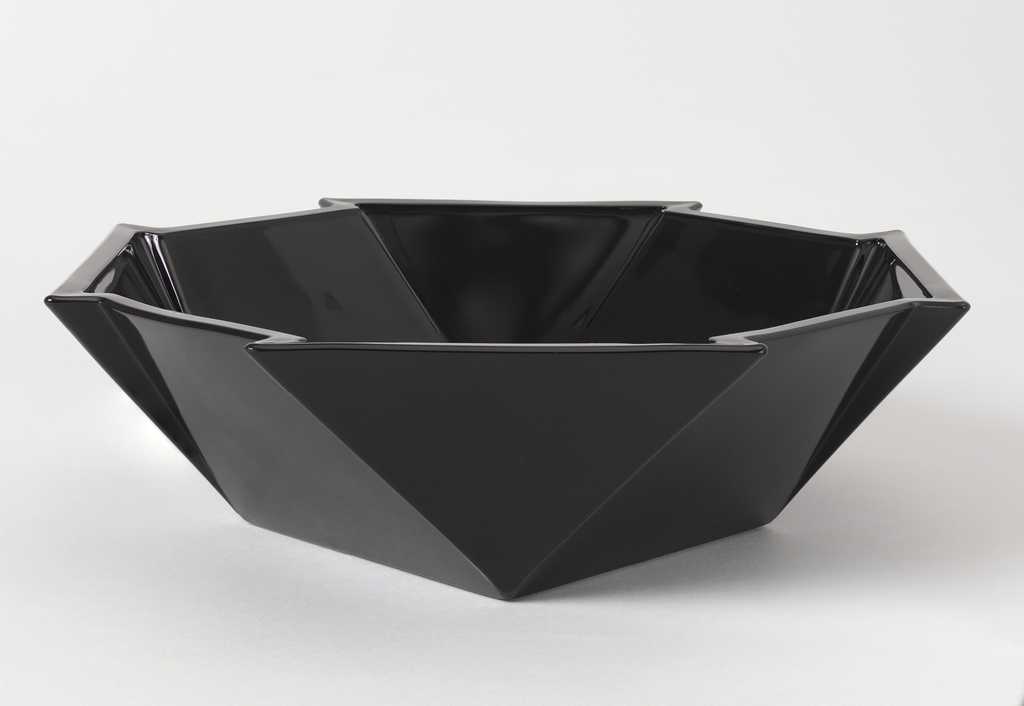 Posted by Catherine Acosta on December 2, 2016

The No. 2402 bowl, shown here in what the Fostoria Glass Company called “ebony,” is one of eight pieces of glass tableware designed by George Sakier in the museum’s collection. The bowl was made in 1930, just a year after Fostoria hired Sakier to be their main design consultant. The avant-garde look of this bowl was a departure from Fostoria’s typical designs—traditional forms with etched, classically-inspired decoration—yet it wasn’t too dissimilar from the company’s square-shaped No. 2419 Mayfair dinnerware from 1929 (also designed by Sakier). The No. 2402 line also recalls the geometric and gem-like designs of Reuben Haley’s short-lived Ruba Rombic line from 1928.

Fostoria made their first ebony glasswares in 1924, the same year they introduced colored glass tableware to the market.[1] The company launched their first complete set of glass dinnerware the following year, in 1925.[2] The popularity of colored glass tableware began in the 1880s and continued into the early 20th century, peaking during the interwar period. Thus, the 2402 line was available in a range of colors from rose to azure to ebony. Furthermore, the form of this nine inch bowl was used for both a smaller version known as a “mint” bowl and candle-holders.[3] For the Depression era table, Fostoria wedded modernism with both tradition and elegance.

Glass dinnerware continued to be popular throughout the 1930s and eventually fell out of style in the mid-1940s. Sakier designed for Fostoria in varying capacities until 1979—this suggests his longstanding relationship with the company and his understanding of changing consumer taste in design, which is seen here in the innovative look of the No. 2402 geometric bowl.