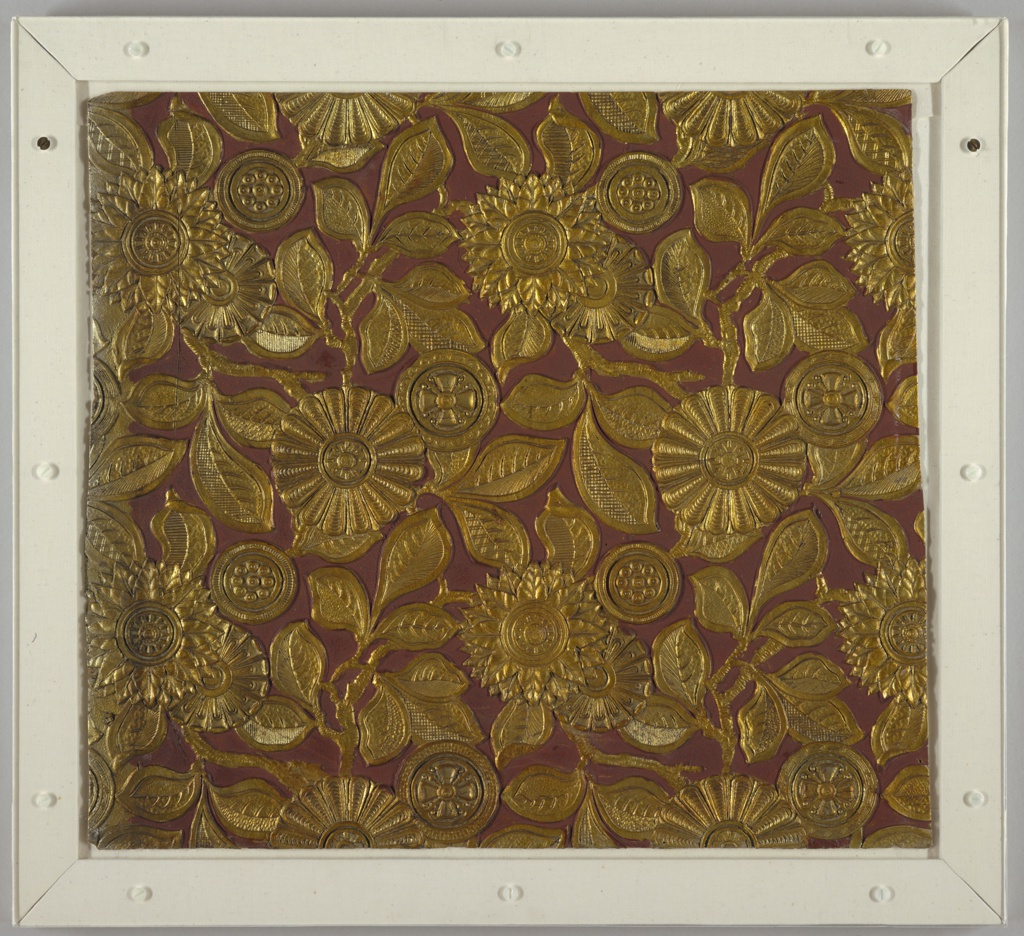 This example of Lincrusta-Walton wallpaper is a rare remnant of the interior decoration of the Rockefeller mansion formerly at 4 West 54th Street. It was installed as a frieze paper in the dining room in 1884, as can be seen in the images below, where it remained until the mansion was torn down in 1937.

Lincrusta-Walton was an incredibly popular type of wallpaper produced in the late 19th century. It was invented in England in 1877 by Frederick Walton, better-known as the inventor of linoleum, and its formula consisted of linseed oil, also used in linoleum, gum, resin, and wood-pulp. This formula not only made the paper durable but also waterproof, which contributed to its success. The paper was a major breakthrough in the search for sanitary, washable wallpaper, and indeed, Lincrusta could even withstand weak solutions of cleaning acid. Adverts of the time promoted the paper as one that could go in every room both on the walls and the ceilings.

However, most notable for the modern viewer is the fact that Lincrusta-Walton papers were three-dimensional. Their designs were created by pressing the mixture into a mold, leading to a raised pattern. This allowed the paper to market itself as a cheaper alternative to leather hangings, which this example imitates in its color scheme, and wall reliefs. However, it seemed Lincrusta-Walton was not cheap enough for some, and its popularity soon lead to various imitators, which had such names as Anaglypta, Calcorian, Cordelova, and Salamander. The materials used in these cheaper papers varied from cork to rag pulp to asbestos.

The imagery of Lincrusta-Walton papers drew from all the most popular styles of the time, including Art Nouveau, Japonism, Moorish Revival, and Rococo Revival florals. This paper shows a Japonist design that may have been created by Christopher Dresser. The beloved and Japan-obsessed industrial designer created some of Lincrusta’s first patterns. Lincrusta was also open to avant-garde use, as in the specially-commissioned panels seen in Guimard’s iconic Castel Béranger in Paris. However, its biggest usage outside of Britain was in the US. The popularity of Lincrusta led to it also being produced in large numbers by Frederick Beck and Company in Stamford, Connecticut beginning in 1882, using the original patents. However, the Rockefeller example seems to have been an original English import. A similar pattern of Lincrusta can be seen in an illustration in the Journal of Decorative Art in London in 1884. This illustration, along with the images from the Rockefeller dining room, gives an idea of the luxurious effect a wall covered in this paper would have had.

One thought on “A Rockefeller Relic”

This is a very inspiring piece, very rich, thank you. And to begin to imagine the incredible beauty that people of wealth can surround themselves with. I wonder if adults educated their children about the art in their environment. At any rate, I appreciate its beauty!