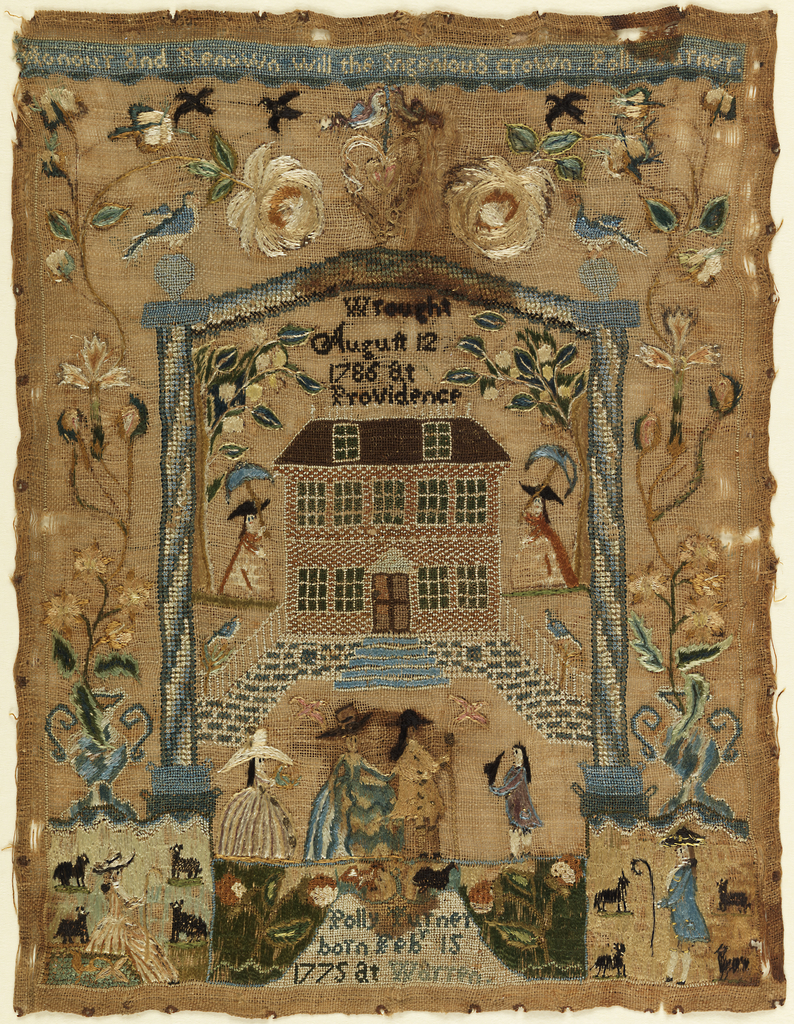 Posted by Jennifer Johnson on November 22, 2016

Polly Turner’s sampler, worked in 1786, is one of the earliest known examples made at Mary Balch’s school in Providence, Rhode Island. According to tradition, the sampler’s five-bay house represents the residence of the president of Rhode Island College. Polly’s is the first known needlework depiction of the house, which appears on at least six later samplers. Other examples from the school also illustrate important Providence buildings, including the State House, Rhode Island College, the First Baptist Meeting House, and the First Congregational Church. Polly’s use of an arch and inclusion of multiple figures, which comprise couples, ladies with parasols, and shepherds and shepherdesses, are characteristics seen on other samplers from the Balch school.

The instructress Mary Balch (1762–1831) was born in Newport. During the Revolution her family relocated to Providence, where she assisted her mother in opening a school. Mary eventually took over, and operated the school until her death. Her own girlhood sampler reveals the Newport origins of the design, motifs, and techniques of those later made under her instruction. Worked in 1773, it features a depiction of Newport’s Colony House that is almost identical to the State House building on two early samplers from her Providence school. No Newport precedent has been found, however, for the archway form seen in many variations on samplers worked at Mary Balch’s school.

Mary “Polly” Turner (1775–1800) was the second of five children born to Caleb Turner (b. about 1739) and Mary Glover (b. about 1743) of Warren, Rhode Island, who married in 1773. She was eleven when she worked this sampler. Although Mary Balch eventually enlarged her school and began accepting boarders, it was unlikely that she could have accommodated them when Polly attended. As an out-of-town student, she probably lived with a local family, a common practice in New England at the time.

Polly’s Providence sampler is closely related to three examples made in her hometown of Warren under the instruction of Martha Pease Davis (1743–1806). It is possible that Polly’s work, or another example from Mary Balch’s school, was used as the model for the Warren samplers (dated 1793, 1801, and 1803). It is equally possible that the Warren sampler pattern originated in Newport, where Martha Davis was born and may have attended the same school as Mary Balch’s mother. Strikingly similar to Polly’s sampler is the 1793 example, now owned by the Rhode Island Historical Society, worked by Martha Davis’s daughter, Patty. Featuring the five-bay house, multiple figures, and striped archway seen on Polly’s sampler, it may have been made by twenty-one-year-old Patty as an example for her mother’s pupils.