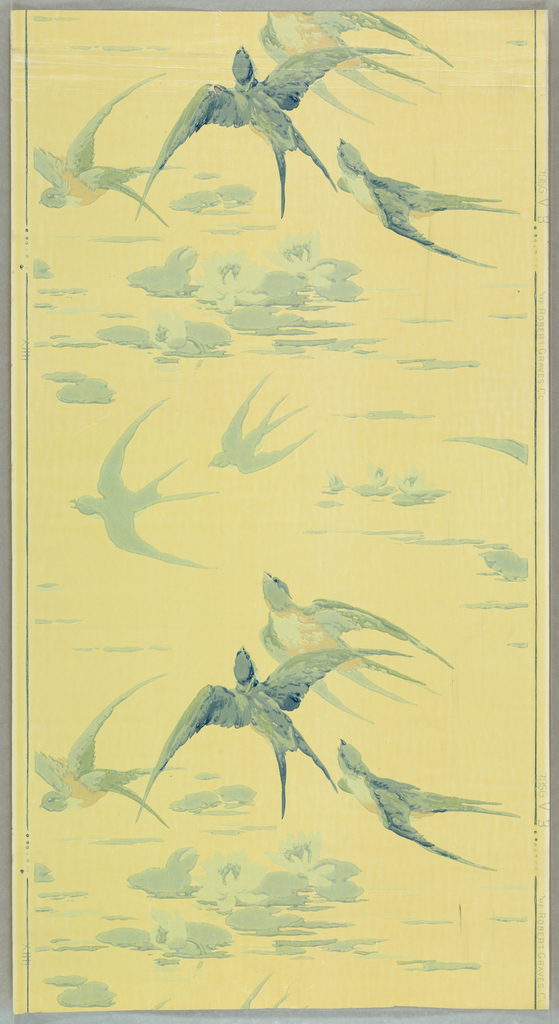 This wallpaper caught my eye at first because of the graceful swooping lines of the birds and the watercolor-like application of the blues. I thought it was a lovely scene of swallows flying in a morning sky. Then I noticed that many of clouds are actually water lilies. Are we looking then at the surface of a pond? If so, then the “reflections” of the birds are very odd, since it seems like we are looking at them from the side, not from below. The paper blurs the boundary between sky and water and plays with our expectations, increasing its sense of whimsy and fantasy. Are we looking at birds flying underwater or lilies floating in air?

I can’t help but sense the influence of turn-of-the-century Japonism in this paper, even though its date is firmly in the age of modernism. The soft colors, asymmetry, and emphasis on curves seem very much of the earlier style. The imagery of birds gliding in a yellow sky seem straight out of a Japanese woodblock print. The overall placid mood of the paper, emphasized with its large expanses of negative space, has more in common with Art Nouveau and Aestheticism than Art Deco.

There is no doubt that the use of an old-fashioned style in this sidewall was a conscious choice to appeal to interwar consumers. Most buyers in the post-WWI American wallpaper market were not interested in decorating their house with the latest in Art Deco, modernist, or cubist-style papers. They were middle-class homeowners whose interests lay in the familiar styles of the nineteenth century. Victorian, Classical revival, and Colonial revival patterns and scenics produced in pastel colors were manufactured in enormous quantities. Their popularity was tied to their suitability as decoration for the latest wave of colonial- and cottage-style housing. The continuing fashion for nineteenth-century patterning was good news for those companies like the Brooklyn-based Robert Graves & Co. who had founded their success in the late 19th century. They continued to produce lovely designs like this one well into the Machine Age.

3 thoughts on “Swallows and Lily Clouds”

Those are not robins, they are swallows, as is clearly evident by their split tails and long, tapering wings. I’m no bird specialist, just an average citizen, but even I know a robin from a swallow.

It was a mistake, no reason to get snotty with them.

They certainly are swallows, which were a popular subject in the era of Deco design – as can be seen in Sanderson’s vintage swallows fabric from the 1930s, which appears to be this exact design, but without the (pesky) lilies.