Egypt on the Walls 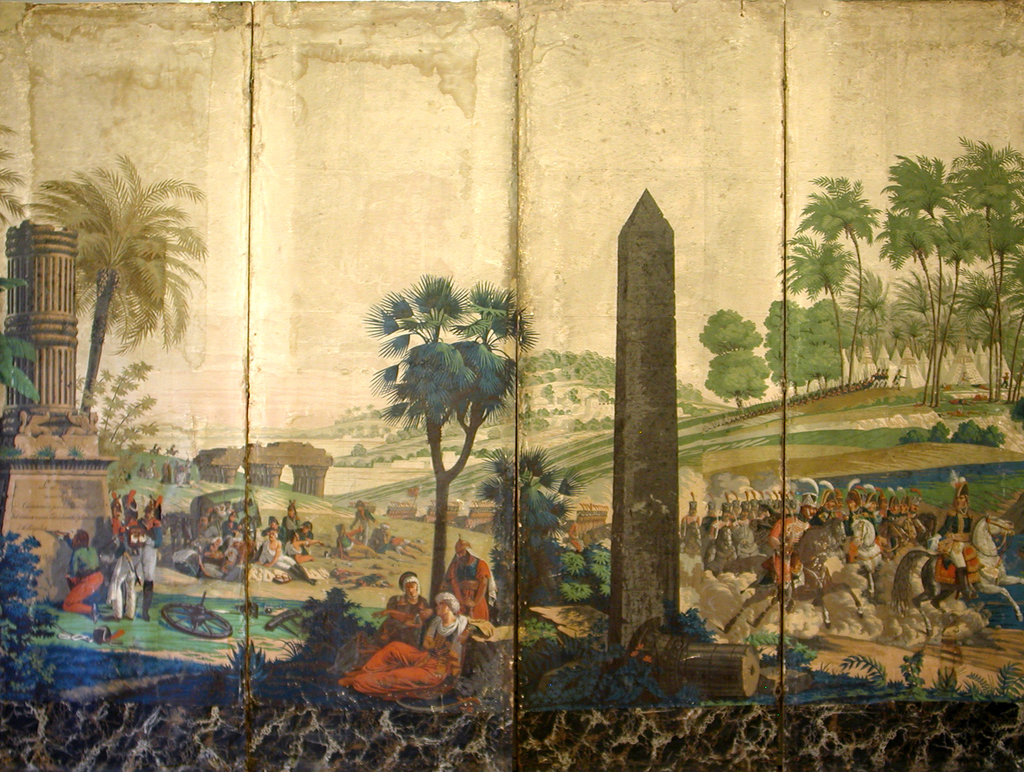 Posted by Nicholas Lopes on November 2, 2016

This scenic paper depicts quite an active scene. On the right, French soldiers on horseback charge off the right edge of the paper. In the middle and in the left background, various wounded Turkish soldiers rest beside an obelisk or sit in a makeshift hospital. On the far left, three French soldiers watch as an artist carves graffiti onto the pediment of a broken column. The graffiti identifies the scene, stating “March 20, 1800, 10,000 French soldiers commanded by the Brave Kleber defeated 80,000 Turks on the plains of Heliopolis.” This inscription refers to the Battle of Heliopolis, a glittering moment in Napoleon’s Egypt campaign. It renders this paper quite commemorative, as it was made over a decade after the campaign, during the period when Napoleon was emperor of France. It may at first seem an odd choice to commemorate a battle from this campaign, since it was a disaster for France, an unsuccessful attempt to disrupt British connections to India and strengthen France’s power in the region, with tens of thousands of French casualties. However, for Napoleon the campaign was a smashing success. It unexpectedly made his reputation as military leader skyrocket, paving the way for his eventual ascension as emperor. Thus design under his reign frequently referred to the Egypt Campaign, and Egyptian imagery was found on everything from furniture to ice houses. Artists and designers were aided by the large amounts of prints disseminated in France that reproduced examples of Egyptian art and architecture. These prints were based on drawings made by artists travelling with the campaign.

This battle scene was just one in a series on the Egyptian campaign produced by Dufour et Cie. Called Dufour et Leroy after 1821, the company was one of the premier scenic wallpaper producers of the early 19th century. Their 1804 paper Savages of the Pacific Ocean, also called the “Captain Cook” paper was incredibly successful and helped popularize the format. It also popularized the use of large panoramic landscapes in scenics also seen in examples by the company such as Telemachus, the Monuments of Paris, and the Tomb of Clorinda and the Crusader Camp. The artist Dentil was also responsible for popularizing these papers, since he also produced examples for the scenic powerhouse Zuber et Cie. Unfortunately, unlike the latter company, which still exists today, Dufour et Leroy closed in 1838 after only 41 years of production.