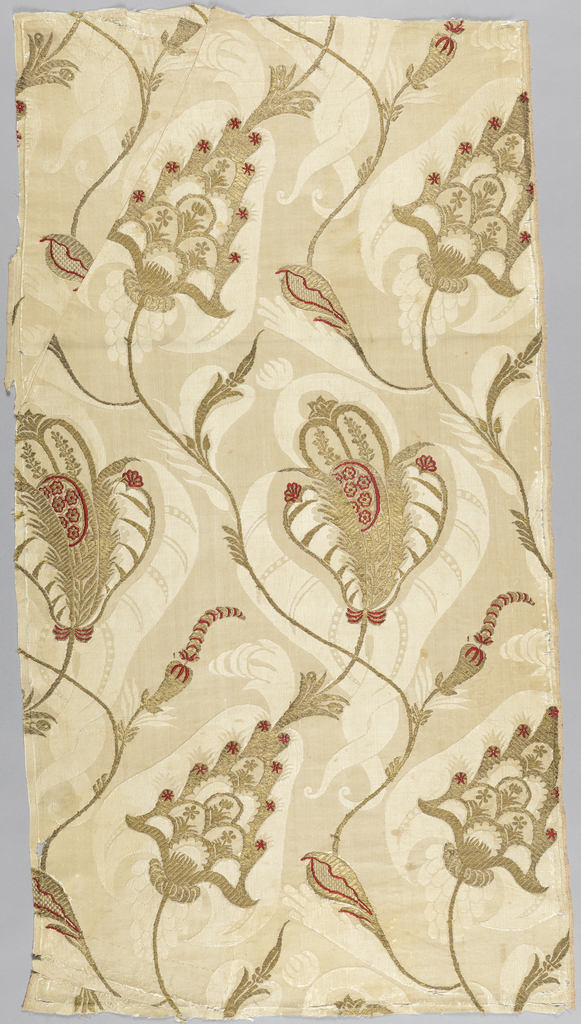 Posted by Matilda McQuaid on November 1, 2016

Silk designs of 1695 to 1715, commonly termed ‘bizarre,’ were characterized by sinuous lines, strong diagonal movement, and motifs in strangely juxtaposed scales, which might include architectural elements, chinoiserie, and fantastical fruits and flowers. The seventeenth century was the age of exploration, and fashionable novelty was found in the rare and strange. Botanical gardens such as the Royal Botanic Gardens, Kew, and the Real Jardín Botánico de Madrid were established to cultivate exotic new species being brought back from expeditions to the tropics, and extraordinary specimens of all varieties were displayed in cabinets of curiosities of the well-to-do.

This textile was part of a large gift from the prominent New York financier and industrialist John Pierpont Morgan. In 1902 he donated more than 1,000 textiles including rare examples of Italian Renaissance velvets, and Coptic, Mamluk, early Islamic and Hispano-Moresque silks, spanning the 13th to 18th centuries. Although Morgan was not a textile collector, he purchased three major European collections – the Antonio Vivès y Escudero (1859-1925) collection in Madrid, the Miquel y Badía (1810-1899) collection in Barcelona, and the Stanislas Baron ( ? -1910) collection in Paris—as a gift to the daughters of his friend, Abram Hewitt, who were establishing their Museum for the Arts of Decoration of Cooper Union, now the Cooper Hewitt.

← Green Glossary: B for Biodegradable
Egypt on the Walls →