Pattern from the Past 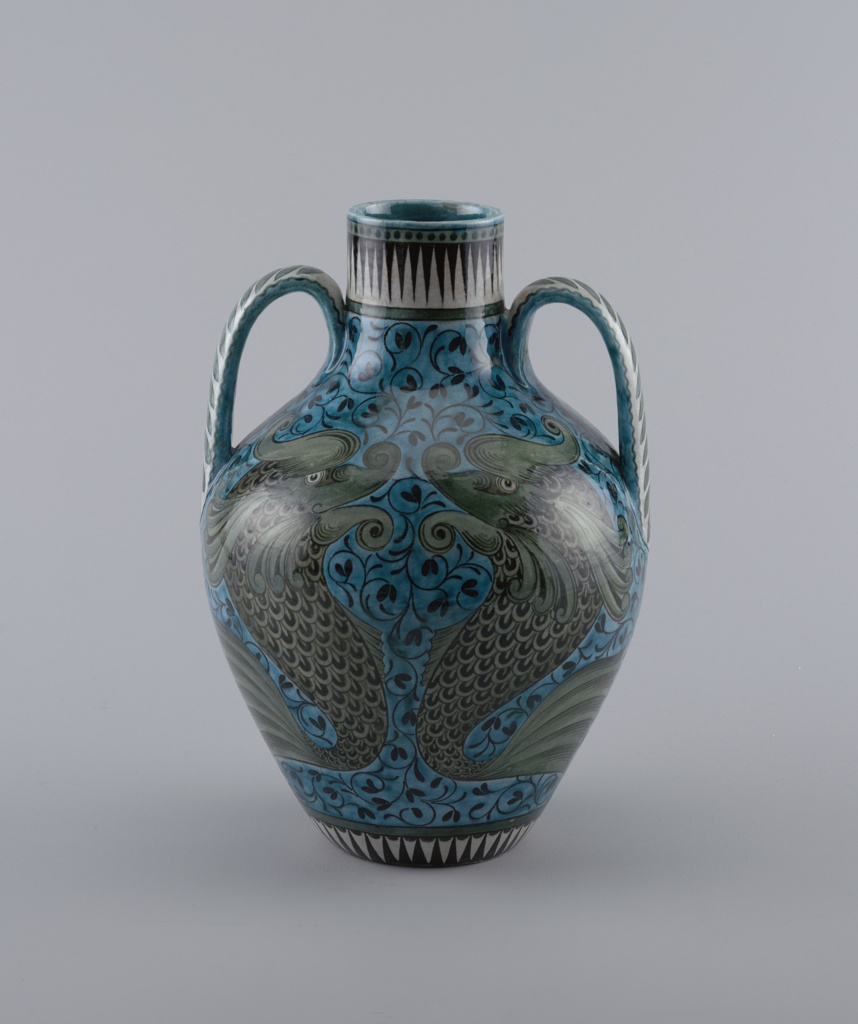 Posted by Catherine Acosta on September 24, 2016

William De Morgan’s ceramic decoration was often inspired by the medieval world, similar to the practice of his dear friends William Morris and Edward Burne-Jones. De Morgan’s vases and tiles were frequently adorned with fantastical animals, beasts, and grotesques. On this vase, two stylized fish recall the designs found in illuminated manuscripts. Their bodies gently follow the curve of the vase—an inverted pear shape with two looped handles—a shape that the designer often used. This vase shows De Morgan’s keen sensitivity towards the visual power in a strong relationship between shape and painted decoration.

De Morgan’s highly stylized floral and foliate patterns were influenced by the ornate and colorful designs of 16th and 17th century Iznik pottery. The term “Iznik” refers to ancient Nicaea in western Anatolia (now Turkey), which was once a large center for tin-glazed earthenware. The decoration of Iznik pottery was originally inspired by the blue and white designs found on Chinese porcelain from the Ming dynasty. By the middle of the 16th century however, a more colorful palette was beginning to be used, which included various shades of blue and green. De Morgan adopted a similar color palette and his colors have been described as “Persian,” like the blues and greens seen on this vase.

The fishes’ scales elegantly mimic this vase’s floral background. Stylistically, this patterning recalls the flat floral designs of Hispano-Moresque ware, the name for tin-glazed earthenware made in Spain. The best examples of this type were made in Spain during the Moorish occupation, beginning in the 8th century and ending in the 15th century. Additionally, Hispano-Moresque ware inspired the popular tin-glazed earthenware of Renaissance Europe, from maiolica in Italy to faience in France to delftware in the Netherlands.

Incorporating all of these cross-cultural influences, De Morgan’s decoration was highly expressive. Browsing through the V&A’s extensive collection of design drawings by De Morgan one can observe how the designer created his own contemporary style that draws from the past for its inspiration.

← A poetic transformation of industrial waste
Maid in Glass →

One thought on “Pattern from the Past”

What a stunning piece of pottery.