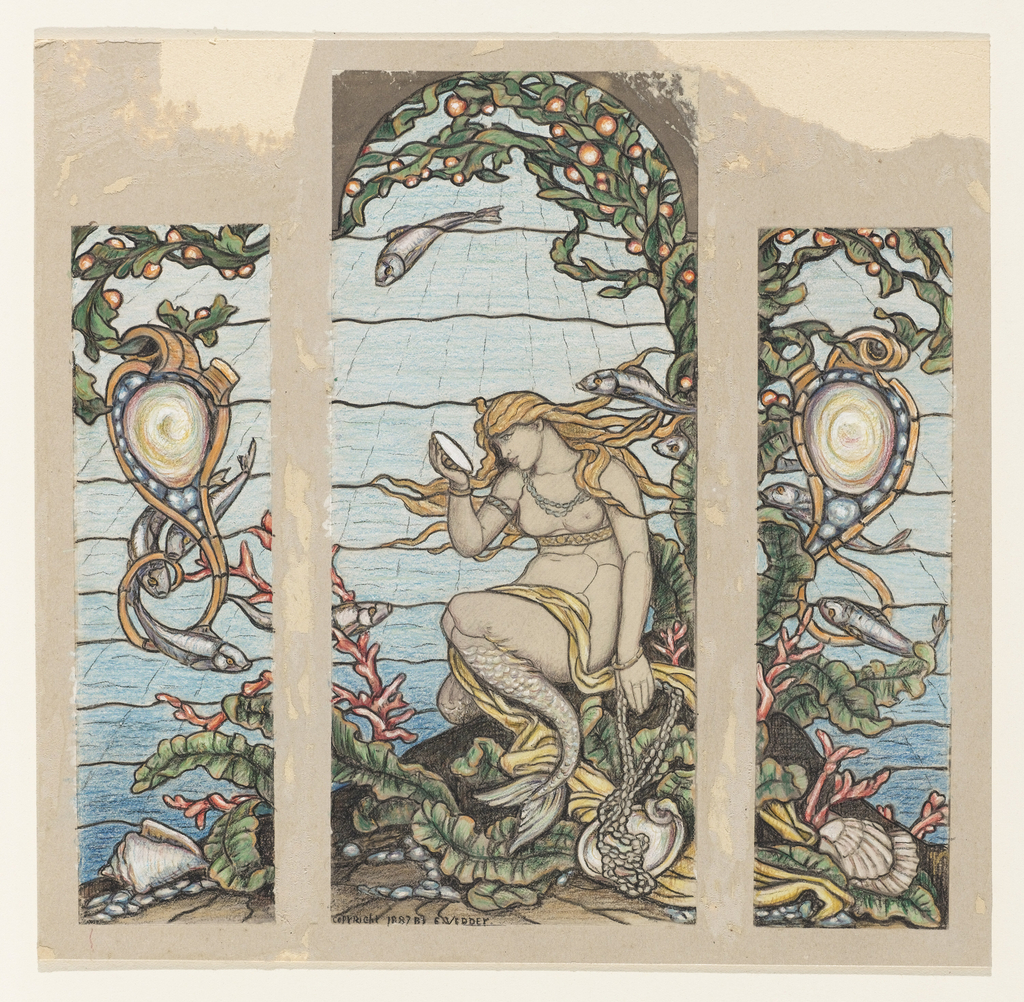 Perhaps better known for his illustrations of the Rubáiyát of Omar Khayyám, Elihu Vedder’s prolific career began in the 1860’s, when the Hudson River School was in its prime, and ended in the early 20th century, when Modernism was taking root. His work, influenced by the Pre-Raphaelites, captured the imagination of late 19th-century audiences.

Born in New York City in 1836, Vedder lived briefly in Cuba before traveling to Europe in 1856 to study art, working in the Parisian atelier of Neoclassical painter F.E. Picot.  Unable to sell his paintings upon his return to New York in 1861, Vedder turned to commercial work, creating woodcuts for Vanity Fair and designing greeting cards. He continued to devote himself to his personal projects, eventually exhibiting at the National Academy of Design in 1865 and later becoming a founding member of the National Academy of Arts & Letters (who donated this cartoon to the Cooper-Hewitt in 1955).

As the 1870’s drew to a close, Vedder’s work was steadily gaining popularity; he was described by the New York Tribune in 1880 as “a man who has won enduring fame.”1  During this period of commercial success, Vedder met Louis Comfort Tiffany, son of the founder of Tiffany & Co., who had just started his own glass company. Tiffany commissioned Vedder to design a leaded glass window for the vestibule of the home of Ashbel Holmes Barney, former President of both Wells Fargo Express Company and the Northern Pacific Railroad, who had retired earlier that year.2  The inclusion of large-scale windows by Tiffany (and his rival John La Farge) in the palatial mansions of New York’s elite is evidence of the medium’s popularity.

This design for Barney’s home, comprising three vertical panels, features a central composition in which a mermaid gazes at her reflection in a mirrored shell, the swirling tendrils of her hair mimicking the wavy lead lines articulating the movement of the water around her.  A twisting stalk of kelp asymmetrically frames the scene, while the curving forms of fish, coral and other sea life echo the undulating waves. The mermaid’s classical pose is typical in the work of Vedder and other American Symbolists who catered to the new taste for themes and imagery drawn from earlier historical periods.3

The mermaid motif, especially popular during the Rococo period, became fashionable again in the art and literature of the 19th Century, perhaps spurred by the publication of Hans Christian Andersen’s The Little Mermaid in 1836.

← Pattern from the Past
Out of Italy →

One thought on “Maid in Glass”

Vedder also did wonderful paintings and mosaics at the Library of Congress, completed in 1897. See loc.gov for images.