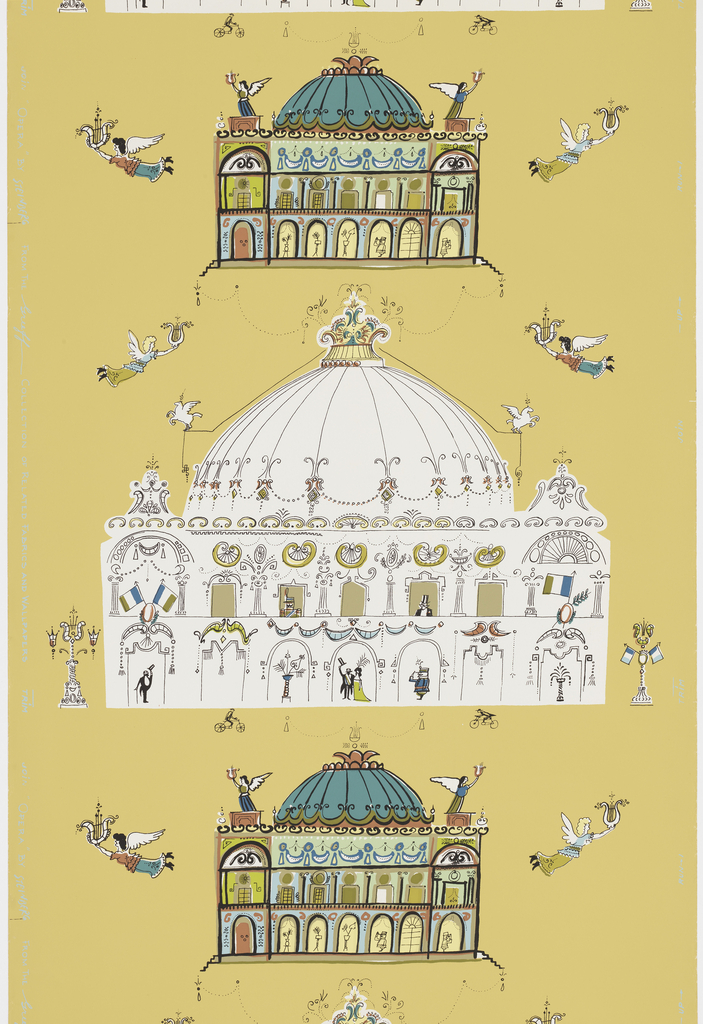 Posted by Gregory Herringshaw on August 14, 2016

One of several wallpaper designs by Saul Steinberg, this paper shows elevations of the Palais Garnier in Paris. Illustrated in signature Steinberg style, the design is fun and whimsical while drawing attention to some of the building’s notable architectural components. The two different elevations are drawn as caricatures which highlight the grandiosity and opulence of the building. Steinberg has chosen to make light of the large gilded sculptures of Harmony and Poetry which he has replaced with winged figures holding lyres, and these same figures can be seen flying about the opera. The design has been formatted like an arabesque wallpaper of the late eighteenth century, with the elevations connected by beaded swags and the symmetrical elements aligned on a central axis.

Steinberg’s inspiration for this design was the opera house designed by architect Charles Garnier which was completed in 1875. The opera became one of the most famous in the world and was the setting for the Gaston Leroux’s 1910 novel The Phantom of the Opera.

Steinberg is best known for his satirical cartoons in The New Yorker but was actually trained as an architect. Over the span of his career he illustrated 85 covers and had 642 illustrations published in The New Yorker. Steinberg designed wallpapers from 1946 through the early 1950s. The museum contains seven different wallpapers designed by Steinberg but this is the only one produced by Greeff. This is one of two Steinberg designs containing Parisian themes which reflect the wanderlust created by the new jet travel following World War II.

← To See and Be Seen
The Wright Textile →