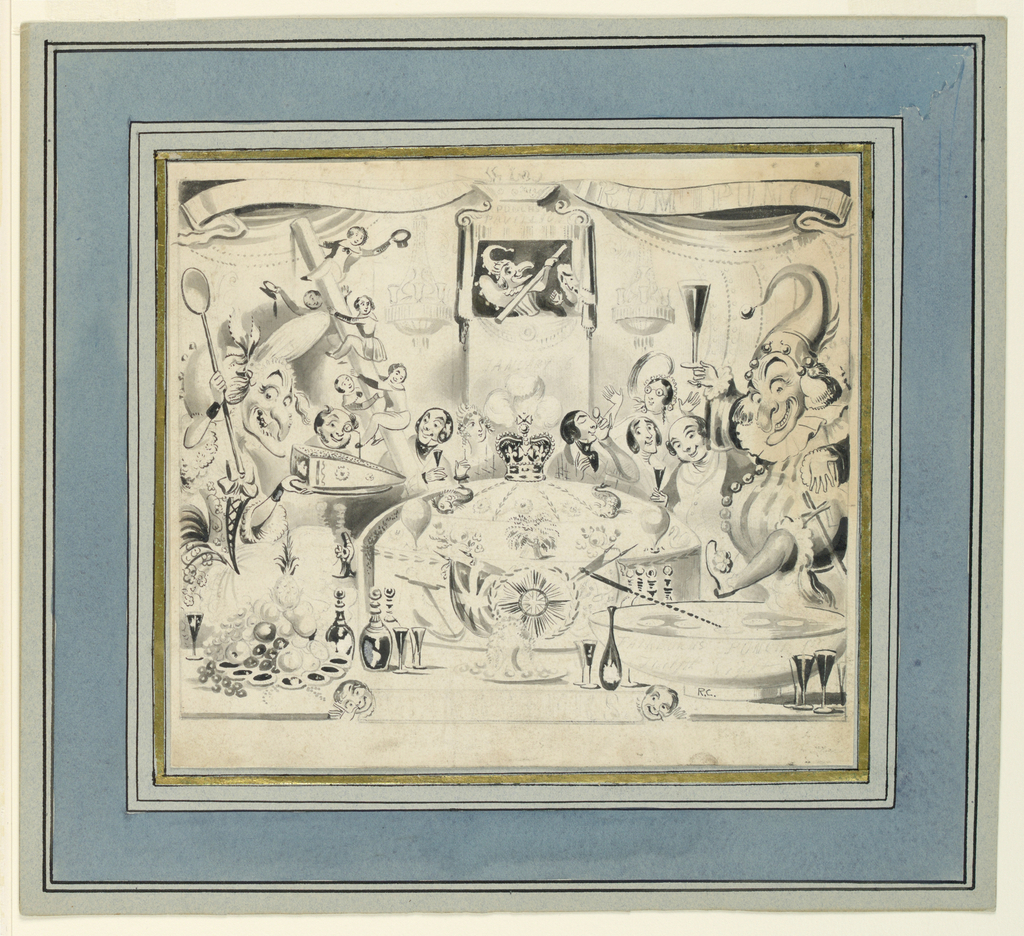 This raucous drawing was made by English printmaker (Isaac) Robert Cruikshank in 1836.  Cruikshank’s dense scene includes genteel figures seated around an enormous, decorated cake while others, emboldened by inebriation, climb a rafter at the left.  Two oversized and garish figures both literally and figuratively steal the cake; however: the male figure holds a full glass and raises his left leg, as if about to dance into the punch bowl.  On the left, the female figure holds a slice of cake and grips a cooking spoon with a hint of menace.[1]

Two specific cultural references are invoked in this bizarre scene: the celebration of “Twelfth Night,” mentioned in faded pencil along the body of the punch bowl, and the puppet characters “Punch” and “Judy,” depicted here as hook-nosed giants.  Twelfth Night celebrations mark the end of the twelve days of Christmas.  In nineteenth-century England this evening was one of merriment and indulgence, from the cutting of the so-called “King’s cake,” to the consumption of alcoholic beverages, notably punch.  From about the eighteenth century onwards, punch was typically made with rum, a liquor created from sugar-refuse, a by-product in great supply given England’s imperial presence in the West Indies.  Twelfth Night celebrations were also memorialized in Shakespeare’s play of the same name. In Cruikshank’s drawing, the embattled puppet couple Punch and Judy are the hosts of the party, as we learn from the writing at the top of the drawing, which spells out: “Punchs Pavilion.”  Punch and Judy’s humble beginnings as characters in street performances were changing by the middle of the nineteenth century, as middle and upper class audiences came to embrace their silly and violent story.[2]  Cruikshank may be satirizing this shift: the well-dressed folks around the cake seem to have no problem with the debauchery around them, enabled by the famed characters and fueled by alcohol.  Punch, be it the beverage or the character, is a slippery host.

Robert Cruikshank was part of the second generation of a family famed for their cartoons.  Cruikshank’s prints, along with those of his more famous brother, George, and his father, Isaac, appeared in various periodicals and the family’s work is said to mark the shift from the “Golden Age of British caricature,” exemplified in the work of Hogarth and Gillray, to the serialization of socially-centered cartoons, seen in the aptly titled “Punch” magazine, nascent by 1841.[3]

← Kashmir to Paisley
A Piece of Pax Romana →