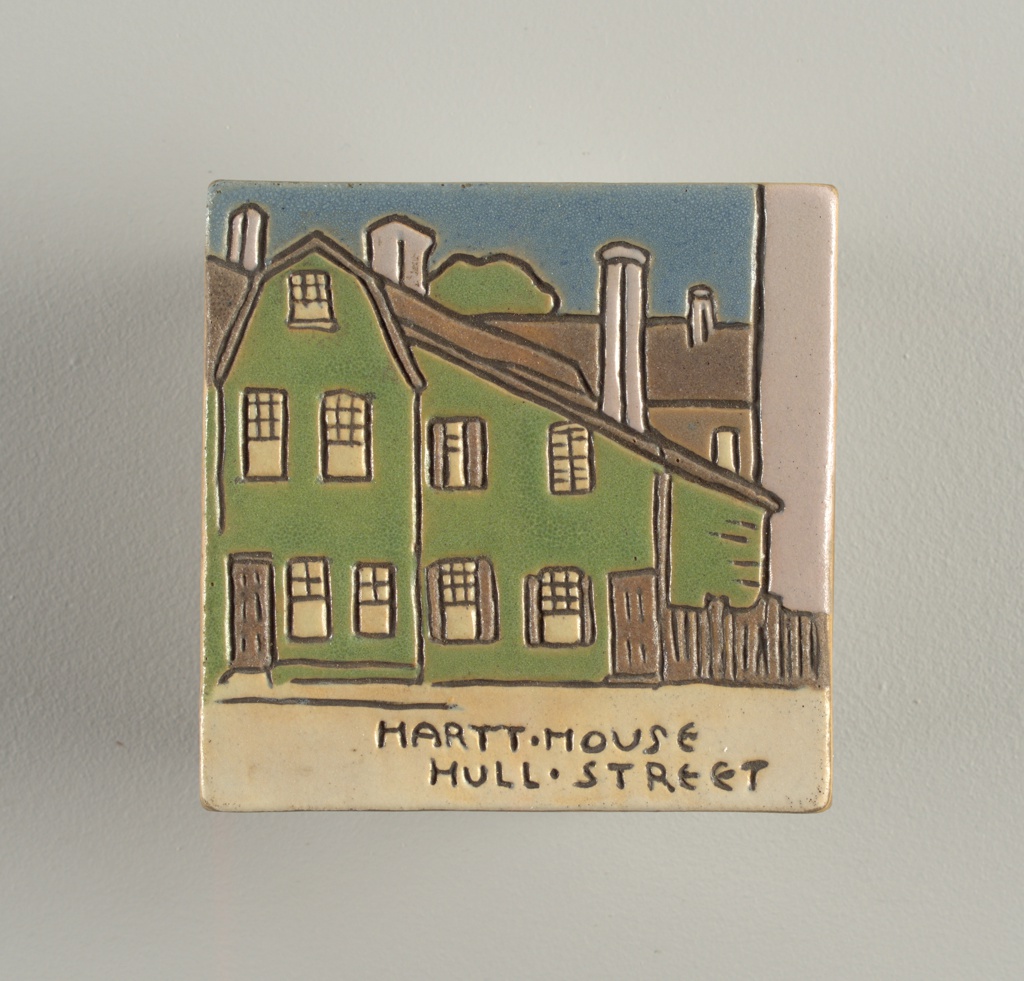 This tile features an image of the Hartt House on Hull Street in Boston, Massachusetts. The tile is part of a “Boston” set created at the Paul Revere Pottery that depicted old and famous buildings around the Boston area. The outlines of the buildings were incised in the clay when it was still soft and then the colors were added. The Paul Revere Pottery frequently utilized matte-finished glazes which were very popular at the time. Boston was the heart of the Arts and Crafts movement, and the hand-made quality of this tile reflects a desire to counteract the growing prevalence of mass production. Little is known about many of the individuals employed by the Paul Revere Pottery, however, its founders, the Saturday Evening Girls, have become of great interest to scholars in recent years.

The Saturday Evening Girls was established in 1899 at the North End Branch of the Boston Public Library by librarian Edith Guerrier. She wanted to create a productive environment that would enrich the lives of the young women in the area, who were mostly from Jewish and Italian immigrant families. In her first speech to the club Guerrier explained, “Someday you girls are going to enter the business world. You will need to know how to use the tool called mind, so that you can do your own thinking… You will need to have a well – informed mind, and if you are to win positions with people you respect and admire, you will need to have a sense of the values of good literature, good music, and good recreation.” [1]

Their evening meetings consisted of discussions on economics, politics, literature, music and art.[2] At this time there were very few similar opportunities or resources for young women, so the enterprise was a new and important development in social reform.

In 1908, Edith Brown, an artist and dear friend of Edith Guerrier’s, had the idea of starting a pottery studio to provide the women gainful employment in a healthy and safe environment. Working conditions for many at this time were deplorable, but the Paul Revere Pottery, the studio they founded, was a safe, comfortable and clean place to work. In addition, wages were fair, and the “works of Dickens, Shakespeare, and other great authors were read aloud” during the work day for the women’s ‘intellectual edification.’”[3]

The works made by the Paul Revere Pottery are expertly crafted examples of ceramic design and illustration, but they are also significant relics of an important reform movement that changed the course of many young women’s lives.

Interested in seeing more Arts and Crafts Movement tiles? Please visit The Hewitt Sisters Collect: Tiles, on view in our second floor galleries, and learn about other important figures from this period!

← A traditional toran
For Rooms Without a View →